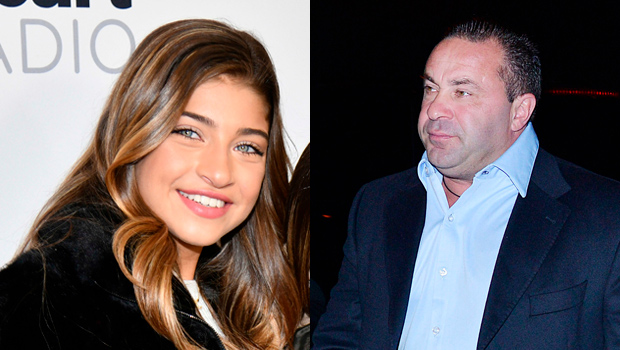 Joe and Teresa Giudice’s 14-year-old daughter, Milania, stayed in close contact with Joe while he was in jail, and now that he’s pending deportation, she’s having a difficult time dealing with it.

Joe Giudice, 46, has been released from prison but is currently in ICE (U.S. Immigration and Customs Enforcement) custody awaiting a possible deportation to Italy, and his 14-year-old daughter Milania, is missing her dad more than ever. Although Joe’s wife, Teresa Giudice, 46, and his other three daughters, Gia, 18, Gabriella, 15, and Audriana, 10, also miss him during this tough time, it turns out Milania has been the closest to Joe throughout his time away.

“Joe wants nothing more than to be home and get his family back,” a source close to the Guidice family EXCLUSIVELY told HollywoodLife. “He feels terrible about everything that’s happened. He misses his daughters so much. He and Milania were talking while he was in jail as much as possible since Joe could email. She’d send him dozens of emails a week. She took it the hardest.”

Joe was released from the Allentown, PA prison he was staying in for almost three years on Mar. 14, after serving for bankruptcy fraud, but he was immediately put into ICE custody at an undisclosed location, and will remain there until an upcoming court date, where he will have the chance to appeal the deportation decision. Although there’s still hope about Joe staying in the U.S., the appeal could take up to six months, so the waiting has definitely had a heartbreaking effect on the family.

“Teresa is sad for her daughters that Joe is sitting in ICE custody right now,” the source continued. “She wants him home for the sake of their daughters as they’re doing as best they can, however, they are young girls and she feels her daughters really need their dad. She really believes that Joe did this to himself, but at the end of the day, her daughters and their happiness are her priority.”

Although Teresa wants Joe back for the sake of her daughters, she doesn’t feel the same way about their marriage, and actually admitted that she’d split with Joe if he does indeed get deported. “I’m not doing a long distance relationship,” Teresa said at the Real Housewives of New Jersey reunion, which aired on Bravo on Mar. 6. “I want somebody with me every day, and I know exactly what happens [in open relationships]. I’m sure he’ll be with other women — it happens. So if we do the long distance thing, it’s not going to work. I’ll be like, ‘Bye bye.’”