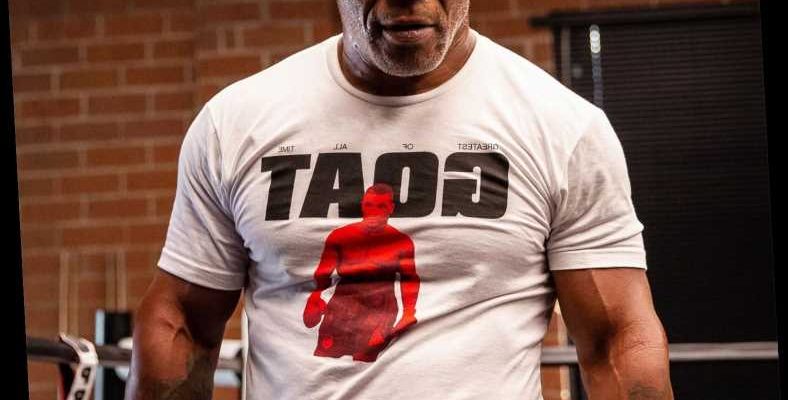 Mike Tyson is ready for his encore.

In a year that's been nothing short of unpredictable, the "Baddest Man on the Planet" is coming out of retirement for an eight-round exhibition match. The fight — taking place this weekend against 51-year-old Roy Jones Jr. — will be Tyson's first match in fifteen years, and he's ready to show he can still pack a punch.

"I'm just going in and I'm going to give it a good show like I always did my whole career," the 54-year-old tells PEOPLE of the fight, which will stream Nov. 28 at 9 p.m. EST on Triller. "I'm really looking forward to doing this. I'm the kind of guy who needs to push myself in life. I need to do something, I need to get ran over by a car, I need to do this. I got to do something."

For months, the controversial athlete has teased his showdown with Jones — a former heavyweight champion considered one of the best fighters of his generation — by posting a series of videos featuring his high-powered training sessions to social media. One video, uploaded in May, has received more than 13 million views on Instagram for showcasing Tyson's incredible strength and speed. It's something he admits he worked hard to recapture since losing his last professional fight in 2005.

"Boxing is really unique in the fact that within a 10th of a second, you could be dismantled," Tyson, who amassed 50 wins, six losses, and two no contests during his career, explains. "It's just so quick. A tenth of a blink of an eye and you're dismantled. That's the really interesting part about fighting. You never know when it's over — or when it truly begins."

But Saturday's bout will be like no other for the former champion, for more reasons than one.

In addition to being his inaugural match against Jones, it's also the first time Tyson will fight in an empty arena since becoming one of the most famous athletes in the world. Due to safety restrictions during the coronavirus pandemic, the match will be held at the Staples Center in Los Angeles without fans in attendance.

"I don't have any emotions when it comes to that particular part of the job," Tyson says of the change of scenery. "This is blank. It's cold as ice. And it's just a job that has to be done."

During his break from the ring, Tyson's presence has still been felt through several high-profile big-screen appearances, and more recently, his popular podcast, Hotboxin' with Mike Tyson. The show has over 1.6 million subscribers on YouTube thanks to conversations between Tyson and other icons, such as rapper Eminem, former NBA star Dennis Rodman, and rapper Snoop Dogg. It was also on the show where Tyson met Sophie Watts, CEO of venture group Eros Innovations.

Earlier this year, the two discussed ways they could help older athletes who may still have something left in the tank. Those talks eventually evolved into the formation of the Legends Only League, which organized this weekend's match.

"People want to feel uplifted and entertained right now, and sports are a great way to accomplish that," Watts tells PEOPLE. "Through this fight, Mike is entertaining and inspiring a lot of people." Tyson says the league plans to offer additional events across other sports in the future, including more fights with high-profile boxers.

"There are magnificent fighters, great fighters, entertaining fighters and you're just going to be so surprised," he explains. "Listen, I used to be such an ego guy, but these guys got so much courage to do this stuff."

While speaking with PEOPLE over Zoom, Tyson is excited to talk about the new generation of fighters who've followed in his footsteps. He also lights up when discussing the pigeons he famously raises, which are just a few feet away outside his window.

He seems like a far cry from the raging Tyson of old, who was famously disqualified when he bit off a portion of Evander Holyfield’s ear during a match in 1997. If you ask him, that's because as hard as he's trained for this fight against Jones, Tyson's also worked on his mental health and personal wellbeing.

"I work on trying to be grateful, I really work hard at that. That's my goal in life," Tyson says of what he's focused on in recent years. "It's almost like reaching my favorite me. Every few years, I get better with the goal of being the best me I can be."

This latest journey back to the ring has also had its benefits.

"Boxing has so much to do with your mental state of mind, your mental health," Tyson adds. "I like to think of it as psychological therapy more than physical therapy."

While the fight on Saturday won't be added to Tyson's professional record, there is still much on the line. He'd like the first Legends Only League event to be an entertaining one, of course, but he also wants to prove to himself — and to others — that age hasn't diminished his skills.

"Anything could be done, you know what I mean? Impossible goes to the people who don't try," Tyson explains. "I know the power of belief. Look at me. Look where I come from. The power of belief, it's the only way to go."