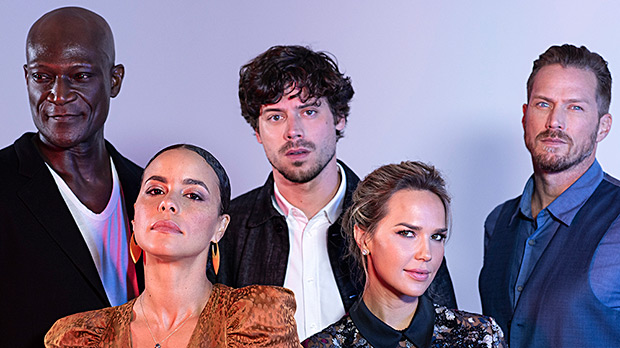 ‘Midnight, Texas’ season 2 premieres Oct. 26! HL spoke EXCLUSIVELY with the cast about everything from Fiji and Bobo’s ‘honeymoon phase’ to the mysterious newcomers. This is your essential season 2 scoop!

Midnight, Texas is back and ready for season 2. The show’s cast members — Parisa Fitz-Henley, Arielle Kebbell, Jason Lewis, Francois Arnaud, and Peter Mensah — stopped by HollywoodLife’s New York City office to spill some serious season 2 scoop. The show will pick up two months after the events of the season 1 finale. Let’s start with Lem and Olivia, who are now married. Vampire blood has been introduced into their relationship, making Lem privy to Olivia’s feelings. Peter told HollywoodLife EXCLUSIVELY that Lem “can’t help but react to them, and sometimes that causes a little bit of an invasion of privacy.”

As for Fiji and Bobo (Dylan Bruce), they’re in the throes of their honeymoon phase (and their bed). “They have a lot of sex,” Parisa teased. “A lot of creative sex because she’s a witch. There’s actually a real thing called sex magic that people practice it, and they practice it in a more exceptional way than most. They’re just having fun. They’re in their massive honeymoon phase. This is two best friends who get to take their relationship to a complete other level. They’re just experiencing joy and what they’re finding is that the more intimate they get, the more it seems to be triggering things that are a little scary and maybe dangerous and maybe worse than that. She’s traumatized by her last experience. She killed her boyfriend and hasn’t been with anybody since. So she thinks everything’s fine, and we hope everything’s fine, but then we see that it’s not. She knows the potential that she has, so we’re going to be seeing her reacting in some pretty forceful ways to try and prevent tragedy like the first one.”

Jason revealed that Joe will be “going through an identity crisis” in season 2, and the addition of Walker (Josh Kelly), a “hot cowboy,” will have quite the impact on Joe. Manfred will be having an interesting experience in the second season as well. “He’s dealing with the aftermath of the demon spirit possession from last season’s finale, and he is plagued with something that could be called demon cancer,” Francois revealed. “It sort of attacks his brain and morals. He’s trying to deal with it secretly when he should have probably shared it with his friends. But he lets it go too far, and they’re all going to have to deal with it.”

Season 2 will also feature the arrival of Kai (Nestor Carbonell) and Patience (Jaime Ray Newman), who have taken over the hotel. “Through them, the Midnighters that we all know and love are exposed somewhat,” Peter teased. “They kind of open up some of the more vulnerable areas of the Midnighters, and you’ll see some transformations in the regular characters as a result of these two being introduced. And then is the threat the two newcomers or the Midnighters themselves?” Parisa added, “In the first season, the enemy was coming from the outside, and this time the enemy is coming from within.”

Arielle admitted to HollywoodLife EXCLUSIVELY that season 2 is “sexier, scarier, and sassier,” but it’s “a more emotional season. In season 1, we were setting the tone for each character and getting to know the characters, but this season every character has so many layers. You really get to learn more about their backstories, more about the decisions they are making with these new newcomers, and really what they would do for one another when you’re dealing with heaven and hell. Our episodes 7 to 9 are so intense. I feel like characters you’d never thought you see cry, cry. Characters you’d never thought you see turn evil, turn evil. It’s quite a tornado, and I’m excited for people to see it.”

However, the show will still “embrace how tongue in cheek it is. We really lean as much into the mindless fun of it all as much as the emotional truth of it,” Francois noted. Midnight, Texas airs Fridays at 9 p.m. on NBC.