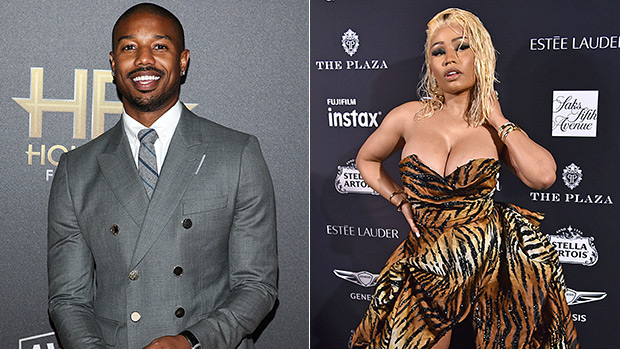 Michael B. Jordan got quite the shout out from Nicki Minaj, who declared she wanted him to undress her during a PCAs speech. The ‘Creed’ actor is totally turned on by her sexy declaration.

There’s nothing like telling a worldwide TV audience that you want to get naked with someone. That’s exactly what Nicki Minaj did while accepting the Female Artist of the Year trophy at the 2018 People’s Choice Awards. During her speech the 35-year-old declared that Creed star Michael B. Jordan would be undressing her later. The 31-year-old actor is loving her hot shout out. “Michael was flattered and turned on by Nicki’s direct flirtation during her award show appearance. Michael loves Nicki’s music and he finds her talent and success very sexy,” a source close to the Black Panther star tells HollywoodLife.com EXCLUSIVELY.

“Michael also feels Nicki is hot, sexy and beautiful so now he is just wondering if Nicki was serious or just messing with him because he can’t stop thinking about taking off her dress,” the insider continues. Nicki did look super fine in sheer lace dress with leather buckles. The skin-tight number flaunted her curves as well as her sexy cleavage.

The rapper opened the PCAs in an equally hot outfit consisting of a black leather skirt, knee-high boots, and a sheer black top as she performed the duet “Dip” with Tyga. She won the two awards she was up for, but it was during her first speech for Female Artist of the Year where she announced, “Shout out to Donatella Versace for custom making this dress for me tonight, and shoutout to Michael B. Jordan, who is taking it off me tonight.” She seemed pretty serious, even giving a wink and sticking out her tongue. The audience got a huge laugh out of it, as well as presenter Jimmy Fallon who was next to her onstage and broke out in the giggles.

Sadly, Nicki wasn’t totally serious about getting naked with Michael. She later told E! News that the two don’t even know each other.  “No. I think he introduced himself to me one time, I believe at the Met Gala.” As for why she brought him up, Nicki explained, “I was watching Black Panther last night, so he was just…happened to be fresh in my mind.”