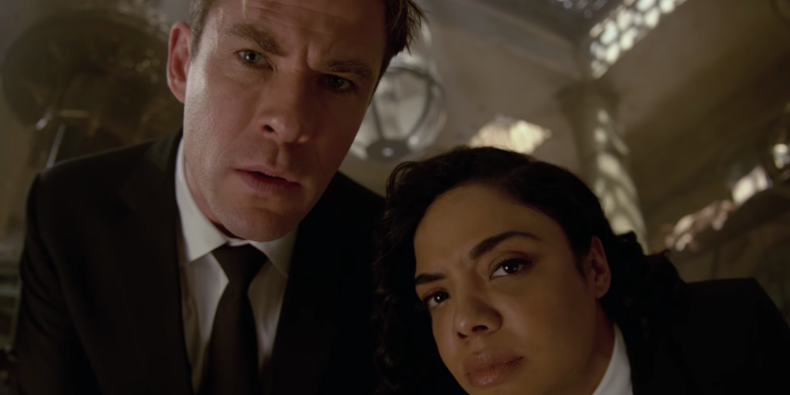 In the first Men in Black: International trailer, Tessa Thompson and Chris Hemsworth travel across international and intergalactic boundaries to save the human species.

Agent M (Thompson) joins the mysterious Men in Black and is partnered with Agent H (Hemsworth), a slacker agent who insists on eating lunch at 9:30 in the morning. From New York to Paris, and from London to the Sahara, the two are tasked with working together and keeping aliens from destroying humanity, all while wearing their iconic black suits and ties (and sunglasses, too, of course). Emma Thompson costars in the film as Agent O, the head of the United States Men in Black division, which, as she reveals in the trailer “are a rumor, recognizable only as déjà vu and dismissed just as quickly.” Liam Neeson plays the head of the United Kingdom division, and Kumail Nanjiani lends his voice to Pawny, a petit extraterrestrial sidekick that helps out Agent H and Agent M. With the help of a handful of chrome gadgets and gizmos, Thompson and Hemsworth’s characters travel the globe to smash aliens to smithereens and save every person on the planet—before wiping the memories of every witness of their actions with a neuralyzer.

#FBF to me & @chrishemsworth (the ‘Fred’ to my ‘Ginger’) saving the universe, YES, even with sand in our shoes. Also, it was casual Friday for the galaxy defenders— that’s why we lost the jackets— which was handy because it was the Sahara. ????#MIBInternational @meninblack

Men in Black: International is the fourth installment of the sci-fi fantasy series that stems from the Marvel/Malibu comic universe and initially starred Will Smith and Tommy Lee Jones in the lead roles of Agent J and Agent K. It also doubles as a reunion for Thompson and Hemsworth, who starred together in Thor: Ragnarok in 2017. Thompson teased images of herself with Hemsworth in the Sahara Desert earlier in December on her Instagram, calling him “the ‘Fred’ to my ‘Ginger’” and insisting that the sand in their shoes would not stop them from saving the world.

Related: Tessa Thompson Might Be the Only Celeb Whose Style Icon Is a Farm Animal