Charles "Chilla" Porter, a champion high-jumper who won silver at the 1956 Melbourne Olympics, has died after a long battle with cancer.

Porter, whose son Christian is federal Attorney-General in the Morrison government, became a national hero after his marathon battle with American champion Charles Dumas which lasted until after sunset. 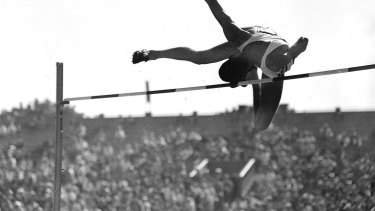 Australian high jumper Charles ‘Chilla’ Porter on his way to the silver medal at the 1956 Melbourne Olympics Games.Credit:Fairfax Photographic

A captivated 60,000 crowd remained inside the Melbourne Cricket Ground as the lights were switched on as both men attempted 2.12m. Dundas won the event at 7.23pm.

"Chilla" was a seven-time national champion and in 2011 was inducted into the Athletics Australia Hall of Fame in 2011.

In a statement on Sunday night, Mr Porter said his father, who also won silver medals at the 1958 and 1962 Empire Games, had died on Sunday aged 84.

"Dad was an unknown 19-year-old Brisbane boy who for almost seven hours went jump for jump with the world-record holding American Charles Dumas who had only months earlier become the first man to break the seven-foot barrier and who was the best field athlete in the world," Mr Porter said.

"Under unimaginable pressure Chilla smashed his own personal best by almost two inches and in the end just clipped the bar in his final attempt at the winning height to see Dumas clinch gold." 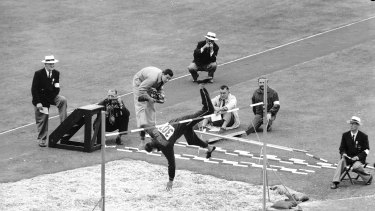 The contest transfixed a nation on the opening day of the 1956 Games, with the unknown six-foot-four Brisbane teenager taking part in what became the longest field event in Olympic history.

"It must truly have been something special because people of all walks of life from that time will stop me in the street 64 years later to say that they were there and still remember every jump," Mr Porter said. 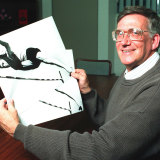 "In the end one of the physically strongest men Australia has produced had his cancer go to his bones and like so many Australian families who fight the cruel things cancer does he went through far too much over the final few weeks."

Mr Porter said his sister Shani's long care for his father which let him die in his own home on the weekend had been "the greatest act of kindness I have ever seen".

Chilla's father Charles Porter was a Queensland Liberal state MP between 1966 and 1980 and served in the ministry of Joh Bjelke-Petersen.

After his athletics career, Chilla became the director of the Western Australian Liberal Party's state division.

"Dad gave his youth to Australian athletics which he loved and the best part of his working life to the Liberal Party in whose founding principles his faith never wavered," Mr Porter said.

"Neither my sister or I knew that tenacious 19-year-old who did those amazing athletic feats and went on to be seven-times national champion and inducted into the Australian athletics hall of fame and we barely recognised what cancer did in the end.

"But Shani and I had our entire life blessed by the most devoted of fathers and Mum got married at 19 to the most devoted of husbands and so we will always remember that wonderful loving father and husband and grandfather who lived such a fantastic life."

The most important news, analysis and insights delivered to your inbox at the start and end of each day. Sign up to The Sydney Morning Herald’s newsletter here, to The Age’s newsletter here and Brisbane Times‘ here.