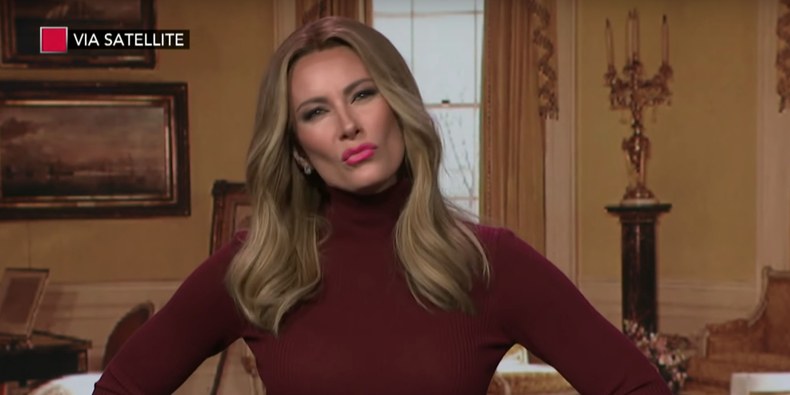 So far, in her nearly two years in the White House, Melania Trump has given exactly one formal interview. But that hasn't stopped Stephen Colbert and The Late Show from seeking the first lady's thoughts and opinions on various matters, a seemingly impossible feat that they've achieved by using Laura Benanti as a stand-in for the enigmatic Melania. Which definitely counts.

The latest topic on which Colbert and company sought Benanti-as-Melania's opinion, on Monday night, was Melania's recent and very public call for the immediate firing of deputy national security adviser Mira Ricardel. "It is the position of the Office of the First Lady that [Ricardel] no longer deserves the honor of serving in this White House," Stephanie Grisham, Melania's communications director, said in a statement last week. Though the East Wing refused to explain the unprecedented request any further, the clash was reportedly prompted by disagreements between Melania and Ricardel over the FLOTUS's recent trip to Africa, as well as by Melania's belief that Ricardel was leaking defamatory stories about her to the press.

Benanti's Melania, however, did have some more to say about Ricardel. "She was lying, she was petty, she was vindictive, and we've pretty much got that covered, so…" she quipped. When Colbert pointed out that such a public firing had some labeling Trump as ruthless, she countered, between pauses to show off her steeliest gaze, "All I want is to end bullying, and if you disagree with that, I will crush you like a tiny bug underneath my stiletto." In fact, "Melania" continued, far from being vindictive, "I am just an innocent little first lady! I am only called on for harmless ceremonial duties, like the carving of the White House turkey," she said, whipping out a few very sharp knives and a crazed expression and explaining that by "turkey," of course, she meant beleaguered White House chief of staff John Kelly.

In the end, Melania seemed ready to repent, admitting that she'd "gone too far this time." To clear the air, she issued one final, earnest statement: "It is the position of the Office of the First Lady that Melania Trump no longer deserves to stay in the White House," she read, adding, "Fire me next, Donald! Please, let me out!"

Benanti has been playing Melania on The Late Show since before Donald Trump was elected president and spoke to W back in 2016 about how she'd perfected her impression of the Slovenia-born model. "I had her face down, her sort of squinty pout. I had worked on that. But I hadn't worked on her dialect because we hadn't heard her speak very much," Benanti said after parodying Melania's semi-plagiarized RNC speech, noting that the hardest part of nailing her speech patterns was "trying to honor the dialect in a way that didn't feel like I was mocking a person when English is not their first language. That was really my biggest concern." And while Benanti said it seemed "rude" to take liberties with Melania's dialect, she had no such qualms about exaggerating her mannerisms. "I thought, as a former model and someone in the fashion industry, that is a place where I could really be over the top, with her physical body language. Kissing him a million times in the beginning and the model-y striking a pose for every camera," she said.

Related: Melania Trump Went to Toronto to Hang Out With Prince Harry and Spent Nearly $200,000 at Six Hotels