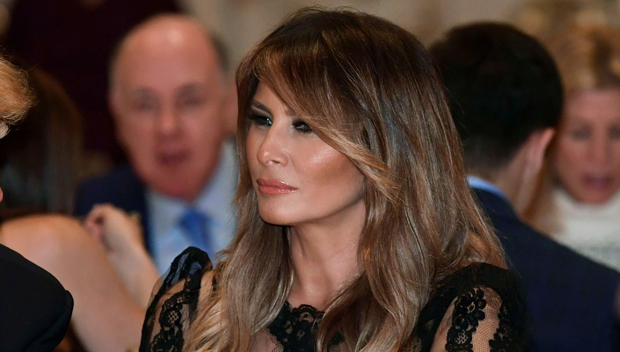 Melania Trump doesn’t think the Dolce & Gabbana dress she wore on Thanksgiving was a big deal despite the backlash over their ‘racist’ ad.

Melania Trump, 48, looked great in a black Dolce & Gabbana dress on Thanksgiving but her wardrobe choice caused major backlash from people since the fashion brand’s been dealing with a controversy over ads that some deemed “racist.” Although the First Lady has been getting slammed for supporting a brand that would put out distasteful ads, she doesn’t get what the big deal is and still thinks the brand is great. “Melania has always been a huge fan of Dolce & Gabbana, she absolutely loves their clothes and likes both designers Domenico [Dolce] and Stefano [Gabbana] personally,” a source close to Melania EXCLUSIVELY told HollywoodLife. “Of course Melania was aware of the racism controversy, but as far as she’s concerned it was a big fuss over nothing, they apologized, people should just move on and get over it. Melania puts a lot of thought into everything she wears, so it was no accident that she purposely chose to wear a Dolce & Gabbana dress—especially as she has worn it previously–she did so as an act of solidarity and support for D & G.”

Domenico and Stefano did indeed apologize for their ad, which was called out for being disrespectful toward Chinese culture after it showed Asian models eating Italian food with chopsticks. The designers filmed a video of their apology and posted it to the Dolce & Gabbana Twitter account. “Over the past few days, we have thought long and hard with great sadness about everything that has happened and what we have caused in your country and we are very sorry,” Domenico said in the video. “We have always been in love with China. We’ve visited it and seen many of its cities. We love your culture and we certainly have much to learn. That is why we are sorry if we made mistakes in the way we expressed ourselves.” They continued their apology by promising nothing like the ad will ever happen again.

In addition to the apology, the other reason Melania doesn’t seem to understand what the big deal is about he dress is because she isn’t used to controversies such as this one. “Melania grew up in a time and place where people didn’t get upset at absolutely anything and everything, she thinks people take offense way too easily these days, and believes they should just learn to chill out more and perhaps even laugh at things instead of getting angry at the slightest thing,” the source continued. “Meanwhile, Melania definitely got a kick out of wearing the dress and the reaction from the liberal media—it definitely appealed to her sense of humor.”

Melania has yet to publicly speak out about the Dolce & Gabbana controversy but we’ll update if any new info becomes available.