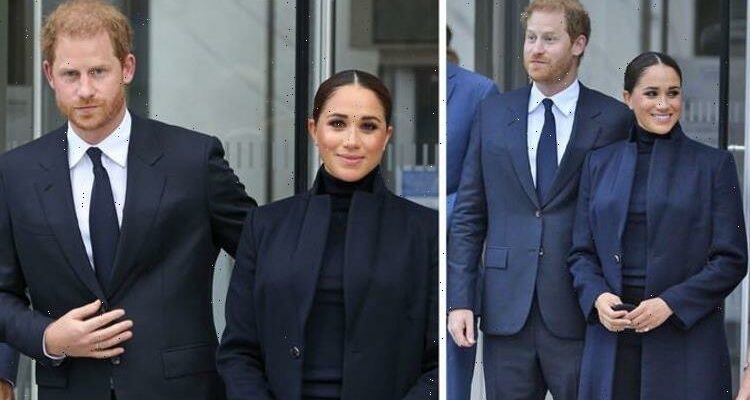 Meghan Markle, 40, and Prince Harry, 37, were snapped in New York City today visiting One World Observatory with the city’s mayor Bill De Blasio and Governor of NY Kathy Hochul. This was the royal couple’s first public appearance since the Duchess of Sussex gave birth to their daughter Lilibet, in June, 4. Body language expert Judi James exclusively told Express.co.uk how “nervous” Meghan and Harry were and at times they looked “awkward” when posing for photographs.

One World Trade Centre was built on the site of the original twin towers and the royal couple’s visit came two weeks after the 20th anniversary of the September 11 attacks.

Earlier this month, Meghan and Harry paid tribute to the historical event by changing the homepage of the Archewell website to display the names of the almost 3,000 people who were tragically killed.

Today, they paid their respects in person.

Both wore dark ensembles for their visit as a mark of respect.

Meghan had opted for wide-leg black trousers, with a navy roll-neck jumper and a long smart navy coat.

Her hair was slicked back into a bun and makeup was minimal.

Harry, on the other hand, wore a black suit, white shirt and black tie and shoes.

The Duke and Duchess of Sussex were asked if they were enjoying their visit to New York and Meghan replied: “It’s wonderful to be back.”

A member of the public also shouted “beautiful Meghan, I love you!” When they exited the building and Meghan smiled, replying: “Thank you.”

Looking at the images taken, Judi spoke about the couple’s body language with each other and individually.

Judi said: “Dressed in black and adopting some moments of suitably sombre body language to suit the venue and site they were visiting, Harry and Meghan also showed some signs of awkwardness or nerves for their first public outing together since the birth of their daughter.

“Harry, in particular, performed some jacket-touching rituals and barrier gestures to suggest he was slightly ill-at-ease in front of the press cameras and some of his small touches, like the steering gesture on Meghan’s back and the back-touches inside the venue, as well as a couple of glances and words to her as they posed, suggested either a need for or a need to offer reassurance.

“Meghan’s lack of response on one occasion suggested that first-outing nerves might have been affecting her too,” she continued.

“Their partial smiles looked rigid and they were lightening smiles, vanishing as quickly as they had appeared.

“Apart from some small smiles and low waves to the fans though the couple looked unusually awkward for most of the poses,” Judi added.

Meghan and Harry are no longer senior royals in the British royal family.

And despite surrendering their royal patronages and military appointments, the couple is still keen to carry out public appearances for issues and charities close to their hearts.

It was announced earlier this week the couple would be attending Saturday’s Global Citizen Live from Central Park “to continue their urgent work with world leaders in the pursuit of global vaccine equity to end the COVID-19 pandemic for everyone, everywhere”.