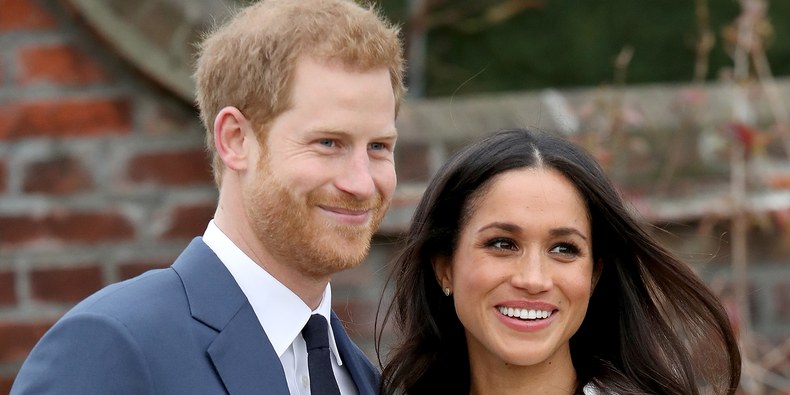 As Meghan Markle's late-April due date approaches with each passing day, the Duchess of Sussex and her husband, Prince Harry, are getting ever more practiced in celebrating new life. On Sunday, the expecting royals attended the christening of Lena Elizabeth Tindall, the nine-month-old daughter of Harry’s cousin Zara Tindall and rugby player Mike Tindall, who also named Harry the godfather of their infant. Then, the Daily Mail reported that Markle, who already had one baby shower, was planning… another. What decadence! What indulgence!

Let’s start with the first party. Meghan Markle and Prince Harry arrived to the christening, which was also attended by Queen Elizabeth II (Lena is, according to PopSugar, her seventh great-granchild) and “other family members,” per Entertainment Tonight, hand-in-hand; she wore a vintage Dior coat and a bag by Victoria Beckham, her close friend whose clothes she’ll never wear. (Prince William and Kate Middleton were elsewhere, getting their St. Patty’s Day on.)

And now, it’s back to celebrating the couple’s own new arrival. According to the Daily Mail, Markle’s mother, Doria Ragland, is expected to fly to the United Kingdom for the second baby shower, which will also be attended by Victoria Beckham and “a handful of Meghan’s most intimate friends.” It’ll be a small gathering, apparently, with just five or six attendees—hardly the extravagant, celebrity-studded affair she hosted in New York last month. (This second shower, it’s worth noting, had already been in the works at the time.) The previous party, which took place in the penthouse of Manhattan's Mark Hotel, counted Serena Williams, Abigail Spencer, Amal Clooney, Gayle King, and Misha Nonoo among its guests; activities included flower-arranging lessons and a harpist performance.

Baby showers are apparently not as much of a thing in the U.K. as they are in the United States, but some sort of event for Markle’s local pals seems fitting. Especially one hosted by her sister-in-law, with whom she is not at all feuding. The royals, after all, are celebrating the babies. Nothing brings people together like celebrating babies.