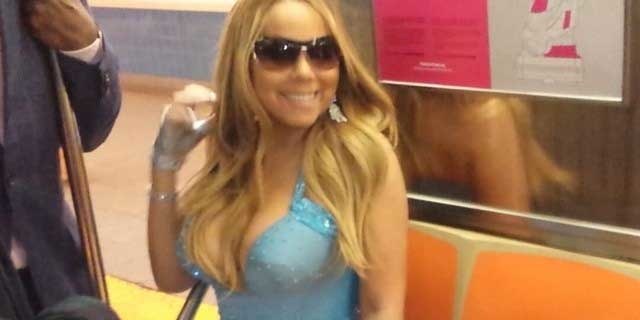 Mariah Carey's greatest contribution to our culture is her numerous hit songs, but her continual contributions to the meme economy is not to be overlooked. Whether you're feeling like having an extra festive moment, find yourself suddenly unable to read, or simply don't know her, Mariah Carey has a moment for you. For her part, Carey has tended to play coy when it comes to her meme-queen status. For example, she's maintained that the infamous "I don't know her" line, originally aimed at Jennifer Lopez, wasn't meant as shade, per se. Though, in the same Pitchfork interview, she also admitted that, yes, she has seen quite a few of those Mariah-centric memes. "You have to embrace it.”

Indeed, for her latest music video for "A No No," Carey seems to have dug way back into her own meme-archive to the time in 2014 when she infamously rode the New York City subway in a bejeweled and beaded blue evening gown. After the Fresh Air Fund Gala at NYC's Chelsea Piers, Carey, along with producer Jermaine Dupri and BET Music Programming President Stephen Hill, hoped onto the 1 Train and rode it all the way to the Bronx and back for reasons that are still not quite clear. Though, Carey posted pictures from her 1 Train excursion online and caused an instant meme-able sensation. The inclusion of the hashtag #subwayincouture seemed to help.

Glimpses of our joyride on the 1 train #subwayincouture

There were also a lengthy series of Vines documenting the journey.

Ultimately, Mariah gave up on the subway for the night and eventually decided to hop in a cab to get to wherever it was she was going. Though, something about that night seems to have stuck with her all these years later, because she basically relived it in her latest music video. In it, once again Carey finds herself in a glittery blue gown on a local train, although looking a little bit more at home with her surroundings this time. Dupri and Hill aren't there, but a cast of smartly dressed backup dancers are.

This probably isn't the exact vision Cynthia Nixon had when she said she wanted to fix the MTA, but at least it's a vision, and a Mariah Carey one at that. Who doesn't want to catch a subway train beautifully awash in "bisexual lighting" that, even when it gets crowded, leaves everyone space to dance? Who doesn't want to see Mariah Carey on the train? In fact, this kind of thing—a meme in 2014 that would sprout into a music video five years later—is more longterm planning that anyone involved with the actual subway seems to have.