Mari Hulman George, who was instrumental in the expansion of the Indianapolis Motor Speedway and became known to millions of fans as the one who ordered drivers to start their engines for the Indianapolis 500 and other races, died on Saturday. She was 83.

The speedway announced her death, in Indianapolis. No cause was given.

She was a familiar figure and voice before the Indianapolis 500 and Brickyard 400 from the late 1990s until 2015, giving drivers the command, “Gentlemen, start your engines.”

Ms. Hulman George befriended with many drivers during her teenage and early adult years. Before she was 21 she joined with a longtime family friend, Roger Wolcott, to form a racing team that included Eddie Sachs, Tony Bettenhausen, Roger McCluskey and Elmer George, whom she married in 1957.

Mary Antonia Hulman was born on Dec. 26, 1934, in Evansville, Ind., the only child of Mr. Hulman and Mary Fendrich Hulman. She never ventured far from Indiana, attending Purdue University and becoming an Indianapolis community leader.

She served on the board of Hulman & Company, a family-owned concern founded in Terre Haute, Ind., in 1850 by Francis T. Hulman as a wholesale supplier of groceries, tobacco and liquor. Her father led the company when it bought the speedway. 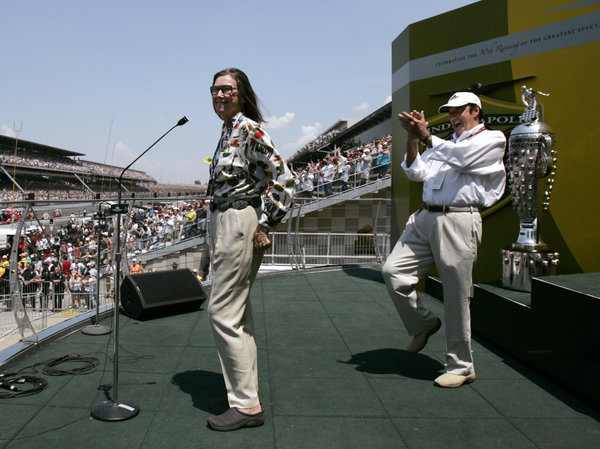 Ms. Hulman George was especially close to A. J. Foyt, the four-time Indianapolis 500 winner, whom she met a year before his 1958 debut in that race. After her death, he recalled living with the Georges early in his career.

Ms. Hulman George’s son, Tony, is the current chairman of the speedway.

In addition to him, she is survived by three daughters, Nancy and Josie George and Kathi George-Conforti; a stepdaughter, Carolyn Coffey; seven grandchildren; nine great-grandchildren; and her longtime companion, Guy M. Trollinger, known as Lum.

Mr. Trollinger shot and killed her husband, Elmer, in 1976 in what newspapers at the time described as a “love triangle shooting.” A grand jury found it was justifiable homicide.

Mr. Trollinger was then a horse trainer living on the family’s Terre Haute estate. Mr. George was a vice president of the speedway and director of its radio network. News reports said Ms. Hulman George would later describe Mr. Trollinger as her boyfriend.

In May of that year, after Ms. Hulman George filed for divorce, Mr. George drove to the farm, broke into Mr. Trollinger’s home and confronted him, the police said at the time. Gunfire erupted, and Mr. George, who was armed with a handgun, was mortally wounded five times by a .22-caliber rifle. He was 47.

The grand jury decided that Mr. Trollinger had shot Mr. George in self-defense, and the charges were dropped.

In 2001, the Indiana Department of Homeland Security renamed its search-and-rescue training area at Camp Atterbury after her, recognizing her help in the care of animals displaced and affected by disasters.