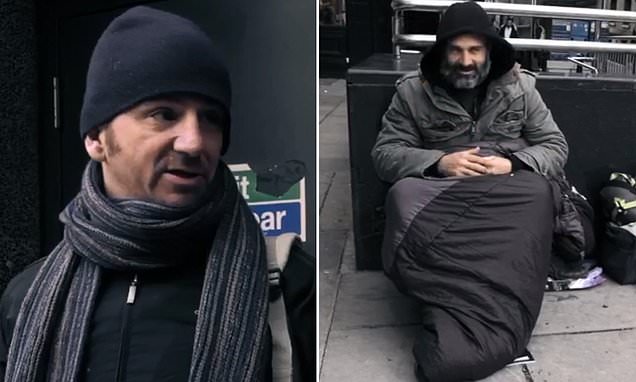 The ‘homeless’ beggar making up to £600 a DAY: Man who has a London flat and gets benefits admits he brings in more on the streets than he would working – and targets pub-goers who give out ‘silly money’

A man who poses as a rough sleeper, but lives in a London flat, says he chooses to beg because he earns far more than he would by getting a job.

Ed Stafford meets a man named Darren, who he believes to be homeless, in tonight’s Channel 4 programme 60 Days on the Streets.

But Darren soon admits that after he makes his money for the day – usually around £100 – he goes back to his Brixton flat for a shower and a warm meal.

On particularly fruitful days, he can make as much as £600 by targeting tipsy pub-goers who are feeling generous.

The supposed rough sleeper also admits to getting benefits, and admits it’s a more lucrative lifestyle than taking on an £8-an-hour cleaning job.

Ed, a former army captain and Amazon trekker, spent two months being homeless in Glasgow, Manchester, and London for the TV experiment, and this week’s episode sees him explore why so many homeless gravitate to the capital – and if they’re all genuine.

He also encounters Neil who claims to make £30 in half an hour begging and boasts of owning a two-bedroom house in Dartford. 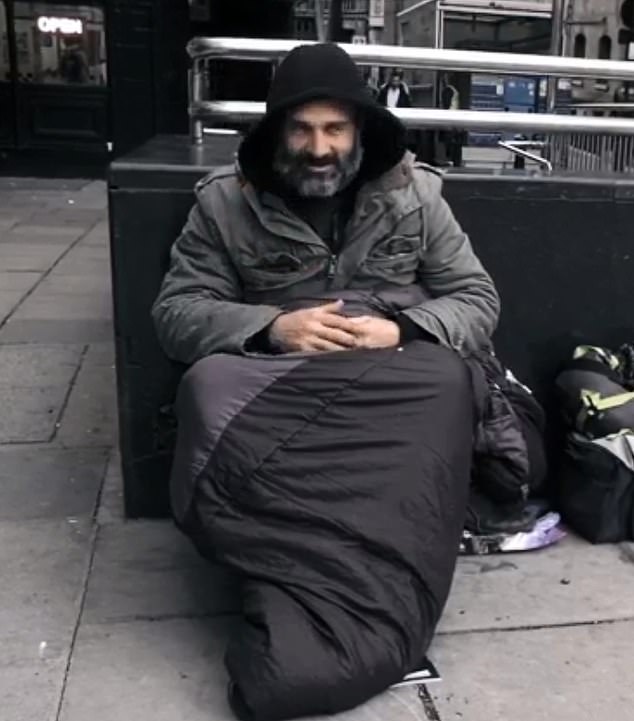 Ed Stafford (pictured) spent two months being homeless in Glasgow, Manchester, and London for a TV experiment. Tonight’s episode of 60 Days on the Streets sees him examine the phenomenon of fake beggars 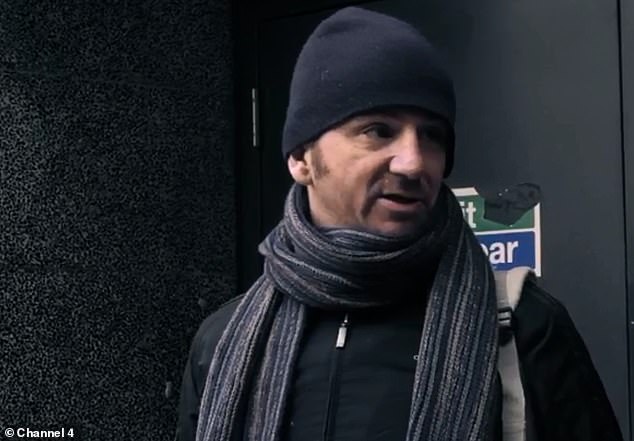 After Darren (pictured) makes his money for day he goes back to his Brixton flat for a shower and a warm meal. The supposed rough sleeper also admits to getting benefits

The episode doesn’t start off well for former soldier Ed, when some homeless men find out that he’s filming the documentary. Another woman shouts abuse at him for posing as a homeless man.

To begin with, he finds it tough to find anywhere to bed down for the night as the streets and doorways are all full of rough sleepers.

After two hours of searching he finds a vacant spot, but after waking up realises he sleeping where someone has urinated.

The next day he manages to befriend who allows him to take a spot in Charing Cross. 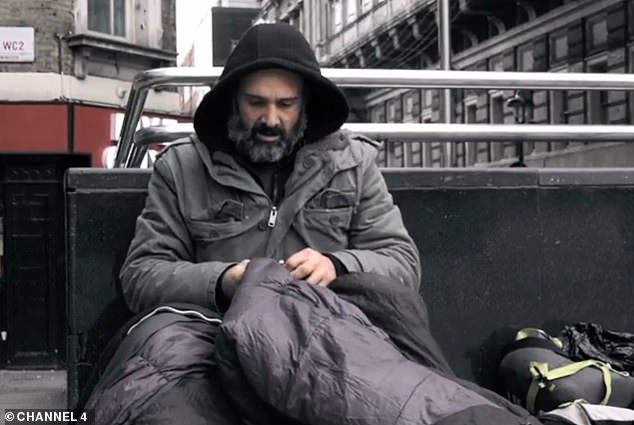 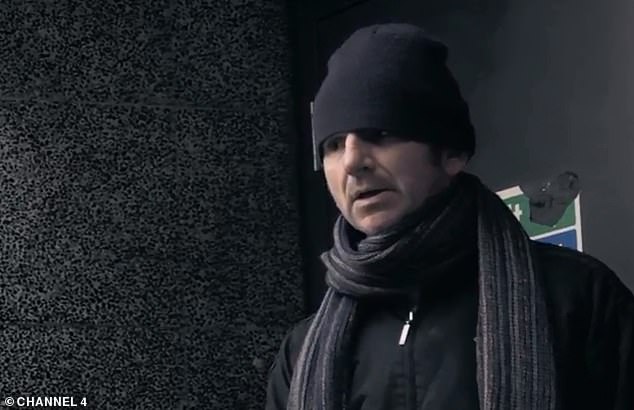 Darren, a rough sleeper, admits that his offered £8 an hour for a cleaning job, but can earn £100 begging

Giving him tips about how to look after yourself on the street and how best to make money from strangers, they bond over how to make money and keep warm.

Ed says: ‘Darren has taught me a lot – by painting a picture you really tug on some peoples heartstrings.’

Darren then boasts about how much money he’s made on the streets, saying: ‘The biggest donaters are the ones that have been to the pub, they give you silly money – I got £600 off one person.’

But Ed quickly finds out that Darren isn’t actually homeless, but has a flat in Brixton. Inviting him back to his flat for a shower and a hot meal he reveal why he still sleeps rough.

Darren: ‘A lot of people on the street are intentionally there. You can earn £100 in one day begging.

But the 47-year-old-man who was given the flat from a housing association when he left prison said his aim was to get a job and stop begging.

But he was quick to admit that jobs he had been offered only paid £8 an hour. 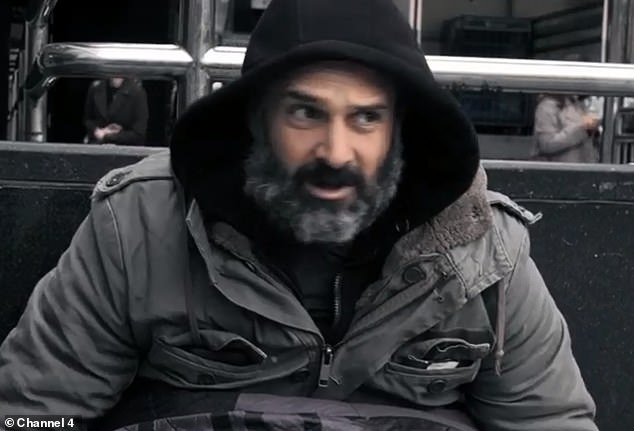 Ed (pictured)who is sleeping rough for 60 days and nights, quickly finds out that Darren isn’t actually homeless, but has a flat in Brixton

‘I’m sure people who have given Darren this money would be up in arms if they knew he was coming back to this flat every night, but he clearly wants to give up begging and get a job,’ Ed says.

He also meets Lee who is in and out of prison and has been living on the streets for the 18 months and his friend Neil who has a two-bed house in Dartford.

Elaborating on his colourful history, Neil says: ‘I used to drive for an armed robber – we got chased a few times. The one time I didn’t drive for them they got caught – he is now doing 35 years in prison’

He adds: ‘I can make £30 in half an hour begging. The spot I share down there is with someone who is actually homeless – because I’m not. I have a two bedroom house – you can come round if you want to.’

Minutes later they’re heading off to Dartford with £50 that Neil has earned from begging.

As they skip the train fare by walking through open barrier, Lee says it’s ‘the homeless way to travel’.

When they arrive in Dartford at Neil’s home, which appears to be a flat, he tells them to  ‘excuse the mess’, saying: ‘I’m not very good at doing house work.’

They then make a phone call to order half a gram of heroin.

‘I found myself in a situation where Neil is injecting heroin in his house,’ Ed says.

‘It’s quite a difficult situation to go along with, but this is what life on the streets is like – if you get offered a sofa to sleep on you take it.’

The rest of the episode shows Ed meeting many other men who have turned to drink and drugs because of their homelessness status.

While he’s also amazed by how much food he gets offered, from pizza to sandwiches – he says he never goes hungry.

Last week Ed met A woman who says she used to be a child model who posed for M&S and Debenhams has revealed how her life unravelled after she chose to live with her drug addict mother, aged 13.

60 Days on the Streets airs tonight at 9pm on Channel 4.