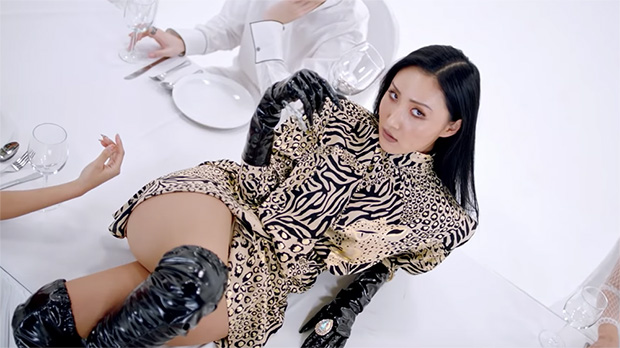 MAMAMOO’s Hwasa has made quite the statement with her first song as a solo artist. She dropped her music video for “Twit” on Feb. 13, and it’s become an instant hit. The video has already has over 460,000 after less than 12 hours on YouTube! The music video is so creative and puts Hwasa at center stage. Her vocals sound absolutely amazing, and she rocks a number of fantastic outfits throughout the video. Her “Twit” video is going to be on repeat for a very long time. It’s that good. The music video also features a cameo from Hwasa’s fellow bandmate, Wheein. “Twit” is one of best solo debuts we’ve ever seen! Can we also take a moment to admire Hwasa on her throne?!

Hwasa immediately became a trending topic on Twitter after “Twit” was released. Fans couldn’t stop talking about her solo debut! One fan tweeted: “The song, the video, the outfits, the iconic black hair, the wheein cameo, I love everything about twit. Hwasa came for our wigs with this solo.” Another fan tweeted: “She’s LIVING in the moment every scene.” We couldn’t agree more!

MAMAMOO has become one of the premier K-pop groups since making their debut as a group in 2014. They’ve released a number of hits, including “Mr. Ambiguous, “Taller Than You,” and “Um Oh Ah Yeah.” All of the girls in the group — Solar, Moonbyul, Wheein, and Hyasa — get along so well. “The members are my family. I think we’re beyond friends. It’s hard to find people who you can click with so well,” Hwasa said in a 2018 interview. We can’t wait to see what’s next for Hyasa and MAMAMOO!