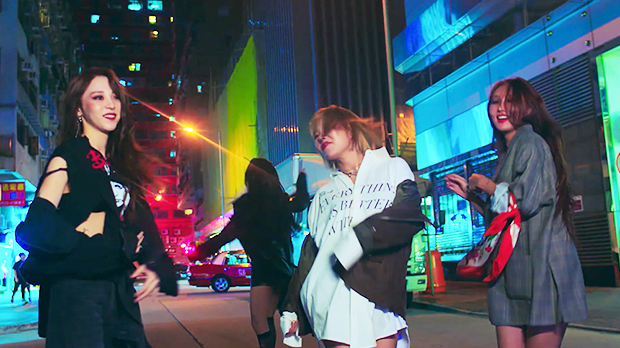 Mamamoo is back! The K-pop girl group dropped a brand-new album and the music video for the title track, ‘Wind Flower.’ The music video is all kinds of epic. Watch now!

Mamamoo’s music video for “Wind Flower” is absolutely S-T-U-N-N-I-N-G. Solar, Moonbyul, Whee In, and Hwasa have created something truly special. The music video dropped on Nov. 29, along with their new album BLUE;S. “Wind Flower” is a total breakup anthem that you should listen to over and over again. In the music video, the girls go through the emotions after the breakup. They also have a fun night out on the town. The “Wind Flower” music video looks and feels like a movie!

Fans immediately fell in love with the “Wind Flower” music video. “Wind flower is such a BOP!! if you don’t stan mamamoo by now you’re missing out on real talent,” a fan tweeted. Another fan wrote, “The song, it’s so comforting, like it’s telling me “it’s okay, i got your back. let it all out, we’ll get through this” and i’m fuckign sobbing shit ’tis the only comeback that made me cry so hard ㅠㅠ i love mmm so damn much.” One fan loved the message the music video sends. “Get better day by day, mamamoo teaching us that no matter how hardships might seem impossible to overcome now, better days will come and happiness with the people who truly loves you is the most important thing.”

Mamamoo officially debuted in 2014 and quickly became one of the biggest K-pop groups. Their new album is the third installment in their Four Seasons, Four Colors series. “By adding member Solar’s signature color blue, the album is full of the autumn mood. Stay tuned for the release!” Mamamoo’s agency, RBW Entertainment, said in a statement in early Nov. 2018.