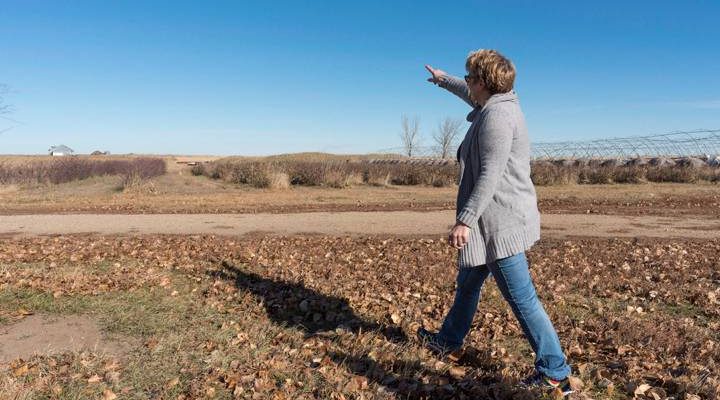 Meads have been around for a long time, but there hasn’t been a craft meadery in Saskatchewan until Prairie Bee Meadery opened in June 2016.

The province has always been a leading producer of honey, which is combined with water to make mead – a liqueur also known as honey wine.

There’s been several variations of mead produced by Saskatchewan breweries over the years, but never a dedicated meadery.

Owners Dennis and Vickie Derksen along with Crystal and Gerard Milburn started with a U Pick farm off the Trans-Canada Highway in Caron, Sask., with cherry trees in 2012. The Derksens realized they needed pollen eaters for the trees and instantly got hooked on bees.

“The very first year we got the bees and we had fruit, we thought ‘gee, fruit and honey, why don’t we make mead?’” Vickie Derksen says.

After getting established with the U Pick and making meads on the side, the Derksens decided in 2015 they would attempt making small batches of mead and selling it commercially.

Here’s a look at how Prairie Bee Meadery operates:

On a recent October morning, Dennis Derksen and his daughter Crystal prepare to make 4,000 bottles of cherry mead in the back of the U Pick shop.

In two white baskets there’s a combined 3,000 pounds of cherries. A lot of them are from the Derksens’s garden, but they also buy from other Saskatchewan producers when supplies are low. The fruit is frozen and thawed when it’s ready to be used.

Buckets full of cherries are unloaded into a presser and mixed with rice hulls to squeeze the juice out of the fruit. The juice flows into a bucket and a hose transfers the liquid into a giant tank for future use.

It’s a messy process with juice sprawled onto the floor and dyed into workers’ hands.

In the next room over, barrels of honey are warmed with electric blankets. Each barrel contains 650 pounds and three to four are needed for a batch.

Vickie Derksen says the bees are what makes the end result special. That includes keeping their bees close to clover, alfalfa and wildflower for the best flavour.

“The quality of our honey is paramount to us,” she said. “That’s really it.”

In the same room where the presser is located, a tiny chemistry lab is tucked into the corner.

Tests are performed on the liquid to see what the sugar levels are and what the acidity is. These tests allow the business to know how the yeast will react and how much alcohol content you’ll have at the end.

After the distilling process is complete, a two-day task of bottling the mead takes place. An assembly line is set up for a bottle filler, a corker, capsule placer and labeller.

What the critics say

Prairie Bee Meadery has entered into the Drink Outside the Grape competition for three straight years and won a medal each time.

Competition chair Richard Leahy says the purity of fruit and honey expression along with the balance of acidity with their wines is something he likes.

Dr. Joseph A. Fiola is a judge for the competition and liked how the business had a diversity of flavours.

Prairie Bee Meadery will have 11 different kinds by mid-November and their haskap is a top seller.

“It wasn’t supposed to smell and taste like fermented honey when they did it and that’s what makes these a cut above the average meads that are out there,” he said.

The business expanded out of their farm in December 2016 when they rented out store space in Moose Jaw, Sask., to sell more product. They’ve consulted with wine expert Dominic Rivard since beginning operations and continue to do so as they consider expansion.

Automation to make more mead is an option while they’re also looking to get into restaurants and other provinces.

You can buy the product online although regulations permit them to ship to certain parts of Canada.

Prairie Bee Meadery is located on Main Street in Moose Jaw and the farm is 10 kilometres south of Caron, where tours can occasionally be arranged.