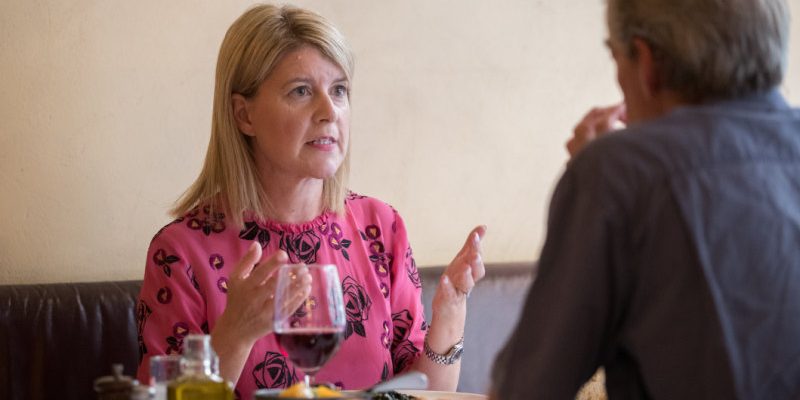 I am supping with the devil. Well, to be strictly truthful I am sitting down to eat with the handmaiden of Satan. Should I be worried? Well, if this really is the devil in disguise, perhaps we’re all Satanists now.

Perhaps it’s because I have known Natasha Stott Despoja for a long time, since she was first romantically involved with one of my oldest friends and then married him. And, let’s face it, she doesn’t seem as if she has had much to do with the devil. That soubriquet was only one of many abusive ones used by male politicians to describe her during her years as a Democrat senator for South Australia – and for a turbulent while the party’s leader. 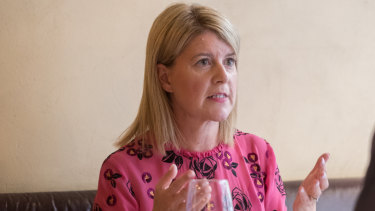 We are having an early dinner at Becco, the stylish Italian restaurant in Crossley Street, at the top end of town. The food’s good, the wine fine and the conversation flows, even if it is mainly about a disturbing subject – violence against women.

Stott Despoja was uncharacteristically a bit late – ‘‘I’m never late; it drives me nuts’’ – but that is down to the seemingly never-ending, devilish snarls on the CBD streets. But you could say she’s on a mission. She is in Melbourne for the launch of her contribution to Melbourne University Press’ ‘‘On’’ series of essays. The next day, Chloe Shorten, wife of the Opposition leader, will do the honours for her powerful essay, On Violence. Only last week, former PM Malcolm Turnbull did the same at a Sydney function, and there have been panels and events around the country.

For nearly six years, Stott Despoja has been chair of Our Watch, the national organisation striving to change the culture and attitudes that lead to violence against women and children. The essay stems from this role, but also from a lifetime of activism in the cause of women and women’s rights. 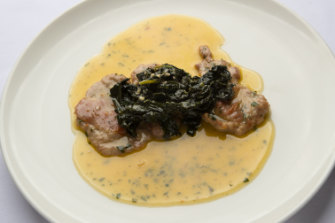 Saltimbocca at Becco in Melbourne.Credit:Jason South

‘‘You’ve got to remember that I’m a product of the women’s movement from the get-go. It was the nature of my upbringing. I was raised by effectively a single parent [Adelaide journalist Shirley Stott Despoja] who imbued in me that sisterhood was powerful, but also that there was no point in me succeeding unless I supported other women.’’

Before we get on to the essay, though, there is the question of food and drink. When she is in Melbourne, it’s fair to say Stott Despoja is something of a regular at Becco – ‘‘we love it’’ – so she opts for the saltimbocca with prosciutto, parmesan and sage and white-wine reduction, an old favourite, while I choose gnocchi with cauliflower puree, black-olive breadcrumb and dried cavalo nero. We share a rocket salad, and she plumps for a glass of Bellvale pinot noir while I have a glass of Tenuta Maccan pinot grigio.

On Violence has some appalling statistics in it about the treatment of women. Take October last year. ‘‘Australia experienced a record death toll … when 11 women were murdered in 27 days,’’ she writes. ‘‘Police get called to one domestic violence every two minutes: that’s 657 times a day. One in four women in Australia has experienced physical violence since the age of 14, and every week, on average, a woman is killed. Most of these murders take place in the home, and they are often the final brutal act after a long history of violence.’’ 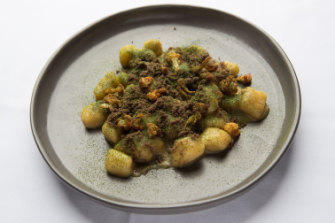 Gnocchi at Becco in Melbourne.Credit:Jason South

So, what’s to be done? Primary prevention is the mantra of Stott Despoja and Our Watch.
‘‘In the same way you’ve seen primary prevention wheeled out to deal with sun protection and skin cancer to safe driving and also, more obviously, in a leading sense, tobacco. It’s our only hope: stopping the violence before it occurs.’’

And the main obstacle to achieving that?

‘‘The main obstacle is an unequal society. If you look at the evidence – the international evidence is absolutely clear – gender inequality is inextricably linked with violence against women and children. I describe that as simple but in actual fact it’s going to take a lot of effort, change, years and money to change behaviours and attitudes.

‘‘Gender equality is at the heart of the solution,’’ she says, ‘‘and we know that any cultural change takes time and potentially generations.’’

She makes the point that the essay is not for specialists and says her political life was always about making issues accessible. The same applies here: she is trying to appeal to someone who might be curious about the issues, saddened by the statistics and desperate to make a difference.

‘‘This is also in some ways an appeal to leaders, politicians, legislators, not just for policies and resources, but for political goodwill. I really want buy-in from leaders. I want the PM to not only say that this is a terrible issue and we have got to address it but to personally commit to supporting and promoting respectful relationships.’’

She is grateful to successive governments for funding Our Watch, but still hopes that political parties and leaders will increasingly recognise the link between gender inequality and violence. The trouble is that governments like quick-fix, short-term solutions and Our Watch is not short-term.

‘‘I do hope governments will commit to us for the long term, but I can’t wait to be out of a job. Most of the women and men in the sector, particularly those on the front line, their jobs are all about being out of a job. We want a day when we don’t have to have these services, we don’t have to preventive education … it’s going to be a long while based on the evidence.’’

Stott Despoja was a senator for nearly 13 years and found entering parliament when only 14 per cent of members were women ‘‘pretty rough’’. Standards have diminished since then, she thinks, and parliament is now more gladiatorial. (‘‘Yeh, I’m a loser, I listen to Question Time.’’) But she remains proud of the work she did, of the initial policy rumblings in diverse areas such as genetic privacy and same-sex marriage, for which she introduced the first bill in 2006 with fellow Democrat Andrew Bartlett.

She gets women of nearly all political persuasions telling her that she was some sort of role model for them or they got involved because of her. ‘‘It’s lovely, and to this day I will always advise or provide support for or answer a phone call from a candidate for office, particularly women.’’ 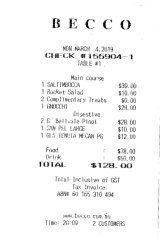 The bill for lunch at Becco with Natasha Stott DespojaCredit:

But she remains desperately sad at the fate of the Democrats, whose electoral fortunes disintegrated after she resigned as leader and who lost their last senator in 2008. ‘‘I have no political home,’’ she says. ‘‘It breaks my heart because if ever there was a time that politics needed a moderating centrist force that focused on legislation but at the same time kept governments accountable, it’s now.’’

When she looks back on her time as leader, she realises it would be very different today.
‘‘When you’re the youngest person in the room but you’re the leader and you’re a woman, commanding respect was extraordinarily difficult.’’ She struggled because she was constantly described in terms of her appearance – short and young – or hair colour, or her emotions. It was ridiculous. ‘‘I think these days a lot of people would call out that stereotypical stuff.’’

In addition to being founding chair of Our Watch, Stott Despoja was Australia’s Ambassador for Women and Girls for nearly three years, which took her to refugee camps and slums around the world.

‘‘On my last trip I met this dynamic young actor, an articulate advocate for gender equality but even she said when I get home and I’ve stayed out a bit late, it’s not surprising that my partner wants to give me a slap. Entrenched attitudes exist all over the world and some of the worst attitudes and violence rates are in our region.’’ 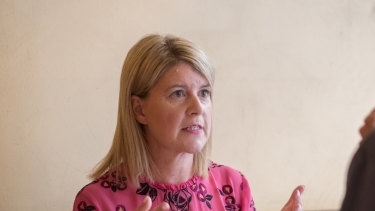 I wondered whether encountering all this had changed her taste for crime fiction – ‘‘my guilty pleasure’’ – given that in so many novels women are the victims of horrific violence. She avoids what she calls some of the gratuitous American crime writers, but is aware that, as Scottish novelist Val McDermid argues, crime writers are writing about what is going on the wider world.

‘‘It’s understandable that writers will reflect that fact in the work they do. All I ask is, whether it’s the media, chroniclers of our age, people who are making stuff up, is that hopefully we can contextualise and not perpetuate some of the victim blaming and other statements.’’

Satan? Not a bit of it. Stott Despoja and her colleagues in Our Watch are on the side of the angels.