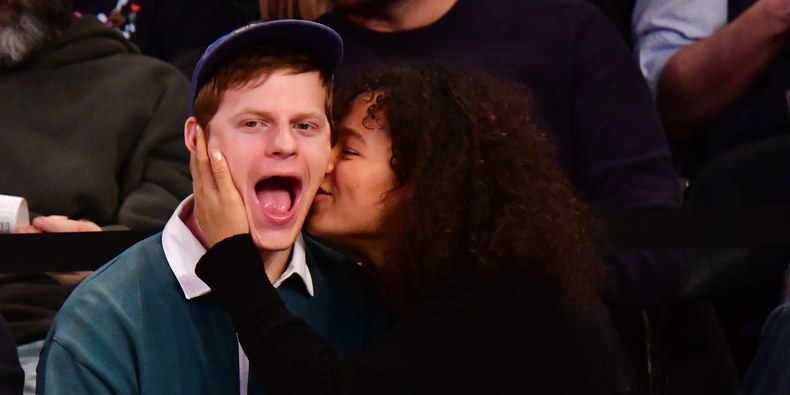 Lucas Hedges first broke through by playing a bit of New England cad with a sensitive underside in Manchester By The Sea, but in his subsequent roles and interviews, it's that sensitive side that we now identify most with the 22-year-old actor. He's come out as "not totally straight" and been hailed as a vector of a new sort of masculinity. Which is to say, a burgeoning young superstar in Hudges' position back in, say, the '90s, would have almost certainly been connected to at least half-a-dozen models by the gossip columns and paparazzi-ed numerous times making out in a club by now (see: Leonardo Dicaprio). And yet, Hedges still retains a sort of innocence and pure boy-next-door charm.

Last night, Hedges was spotted in the celebrity-packed stands of Madison Square Garden for the Phoenix Suns vs. New York Knicks game (Sophie Turner, Joe Jonas and a Priyanka-less Nick Jonas, as well as a bleach blonde Ansel Elgort in some Gwen Stefani-worth red plaid pants, were also in attendance), and apparently he got caught in the kiss cam with his guest and seemed absolutely surprised by it all.

No word on who his friendly seat mate is.

After an incredibly busy year that included roles in Boy Erased, Ben is Back, and Mid90s, Hedges has another busy year coming up in 2019. He'll play a semi-fictional version of Shia LaBeouf in the Shia LeBeouf-written film Honey Boy (in which, of course, he'll also co-star with Shia LeBeouf) and has the lead role in Waves, an indie musical about teenagers in Florida. He's also in the midst of his broadway debut in The Waverly Gallery alongside Elaine May and Michael Cera, a commitment that runs until next month. And just maybe he'll be a lead in the tabloids in the new year.

Related: Lucas Hedges Confesses He Was Almost Thrown Out of Madonna's Oscars Party