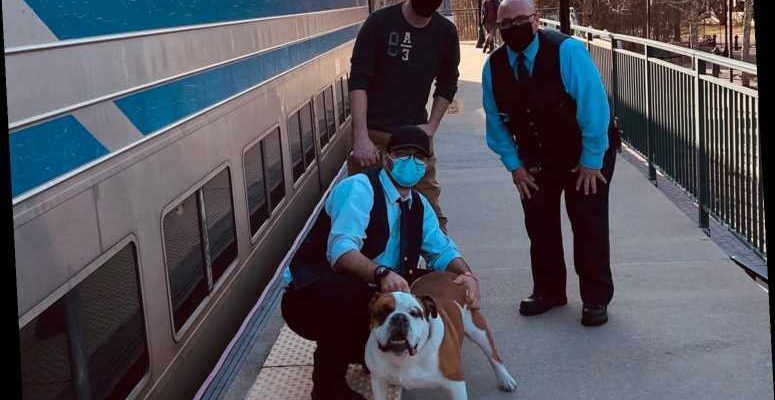 The owner of an 8-year-old English bulldog has two Long Island Rail Road (LIRR) employees to thank for reuniting him with his beloved pup.

Mike Francow, a building construction owner from Suffolk County, New York, was eating lunch at a park in East Hampton last Tuesday when his dog named Sampson ran off.

For hours, Francow desperately searched for Sampson. But the canine was nowhere to be found.

"He's the type of dog that always returns," Francow told the New York Post. "He would usually come back to my van."

Unfortunately, a "distraught" Francow had to give up his search and return to work. Unbeknownst to him, Sampson had fled onto some nearby train tracks, leaving the canine in danger. Luckily, LIRR engineer Christian Beck spotted Sampson on the tracks while slowly moving his 10:10 a.m. Montauk-bound train out of Jamaica.

"As a dog lover, it's like my worst fear to hit a dog," Beck told the Post. "Luckily it was a section of track where the max speed you can go is only like 40 miles an hour. It was enough time to react and slow the train."

Beck and assistant conductor Vinny Fragale stepped off the train and called to Sampson, who hid in the shadow of the train's engine.

"I could tell, like, 'Oh he's been out for a while, he just wants some shade,'" said Beck.  "I was thinking about my own dog, like, you know, if he was left out. Or he had gotten out somewhere else. I'd be totally scared." After a few minutes, Beck and Fragale managed to get Sampson onboard. They gave the bulldog some water and continued on their journey to Montauk, arriving on-time at 12:54 p.m.

"This act of heroism is another example of how our workforce is truly part of the community where they live and serve. Our conductors and engineers and other frontline workers are truly compassionate people who take pride in helping their Long Island neighbors," LIRR President Phil Eng said in a statement obtained by PEOPLE. "As a dog owner myself I am glad that our crew went above and beyond to rescue Sampson and connect him with his owner. I look forward to providing a commendation for all of these employees and working with our labor leaders to acknowledge the true spirit of the workforce."

Beck, Fragale, and other LIRR crew members posted about Sampson in enough missing pets Facebook groups that word got back to Francow that his precious bulldog was safe.

"He loves to ride, so I'm sure when the train pulled up and they opened the door he was like, 'Sure, this is great,' " Francow told the Post about Sampson. Francow retrieved Sampson from the LIRR crew members several hours later once the train returned to Bridgehampton. There, Beck and Fragale posed for a celebratory photo with Sampson beside the train before sending the dog home.

"Those are some really special people to do that and take care of him," said Francow.

Francow also said that he plans to put a tag on Sampson to ensure that an incident like this never happens again.