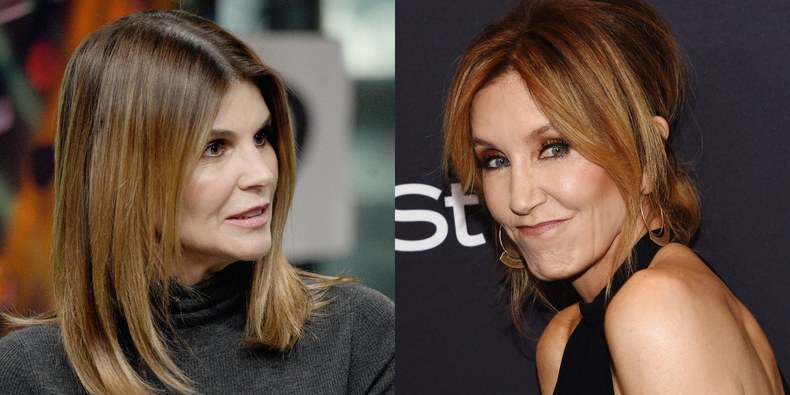 Although CEOs and other bigwigs are among those named in the 50-person college admissions scam indictment, the most fascinating are still Lori Loughlin and Felicity Huffman. And it's not just because they're famous; it's because they seemed ill-suited to scandal. The idea that a banker or tycoon might try to skirt the rules isn't exactly surprising, but a celebrated prestige actress and a beloved sitcom star? It's harder to reconcile their public images with what we now know about them, and it's even harder to understand why they did what they did. The whole thing has been perplexing, which is likely why it has gone viral. As political pundits and comedians alike continue to debate the lessons of the unfolding college cheating scandal—money, privilege, fame, wealth, race, class, laws, tests, coddling, oh what shall become of us—let's take a moment to check in with the status of the major players as of midday Wednesday:

Felicity Huffman is out on bail. The FBI showed up at her door in the wee hours of Tuesday morning, guns drawn, and took her into custody, where she was processed by a federal marshall. She appeared in court Tuesday afternoon and posted a quarter million in bail, per Jezebel.

William H. Macy, Huffman's husband, was not arrested and is not a defendant, though it appears from court documents that he was aware of the scheme. He accompanied Huffman to court yesterday, and today is… his birthday. Happy birthday.

Lori Loughlin surrendered to federal agents on Wednesday. The FBI showed up at her house on Tuesday morning, but she wasn't home because she was filming in Vancouver. Agents did arrest her husband, Mossimo clothing founder Mossimo Giannulli, who was also indicted in the scam, and made arrangements for Lori to turn herself in when she returned, according to TMZ, and now that's happened. As of right now, Loughlin is in a federal building in Los Angeles, and Giannulli is out on bail.

William Rick Singer, the head of the bribery operation, who arranged payments in exchange for doctored test scores and fake athletic profiles, has made a deal, per TMZ. He will plead guilty to racketeering.

Playwright David Mamet, longtime friend and collaborator of the Macy-Huffmans, penned an open letter, published in the Hollywood Reporter, in which he writes, "I do not see the difference between getting a kid into school by bribing the Building Committee, and by bribing someone else. But, apparently, the second is against the Law. So be it…That a parent’s zeal for her children’s future may have overcome her better judgment for a moment is not only unfortunate, it is, I know we parents would agree, a universal phenomenon."