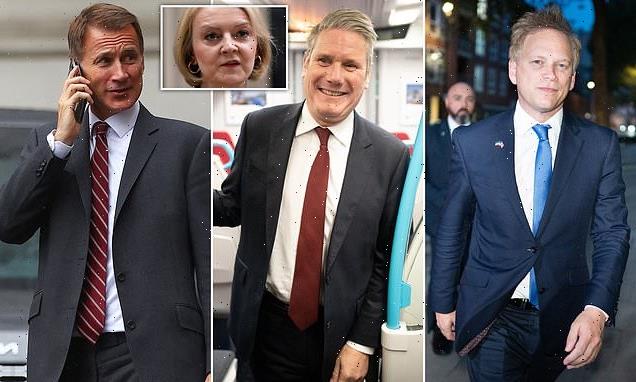 RICHARD LITTLEJOHN: The grey men of a certain age are back in charge… We’ve ended up with a palace coup staged by Remainers determined to keep us in lockstep with the EU

Here’s a plan. In the interests of stability, why don’t the Tories cut out the middle man and invite Keir Starmer to become Prime Minister in a Government of National Unity?

After all, he’s nailed on to get the job after the next general election.

They’re all comfortable with the highest tax burden for 70 years, have signed up enthusiastically to the ruinous Net Zero agenda, and given half a chance would rejoin the EU in a heartbeat. Any one of them would have been happy in a Tony Blair administration. They even sound like him, spouting patronising centrist drivel.

After the seat-of-your-pants Boris Johnson razzmatazz and the short-lived Fizzy Lizzie experiment, the grey men of a certain age are back in charge.

The defenestration of Truss is the ultimate triumph of the forces of defeatism and decline. It has also hammered another nail into the coffin of British democracy. 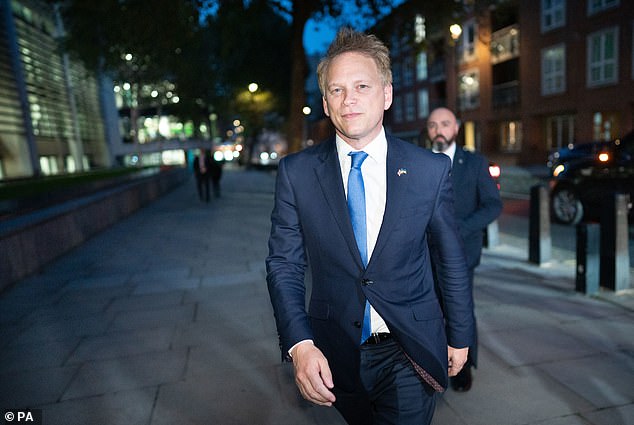 Extinction Rebellion poster boy Shapps was openly campaigning at the Tory conference against any reduction in the top rate of tax. I wondered at the time what he was even doing in the Conservative party

Fizzie Lizzie may have been the naïve architect of her own spectacular fall from grace. But at least she attempted, however cackhandedly, to fulfil the promises she made during her successful leadership campaign. It’s now glaringly apparent that the hardcore Remainers in her own party were never going to let that happen, even before she foolishly played into their hands.

Extinction Rebellion poster boy Shapps was openly campaigning at the Tory conference against any reduction in the top rate of tax. I wondered at the time what he was even doing in the Conservative party, since he would be equally at home in Labour or the Lib Dems.

Shapps was the allegedly Tory Transport Secretary who declared war on free movement under cover of Covid by bunging £250 million of taxpayers’ money to Left-wing councils to set up a network of widely hated, car-free, jam-creating, pollution-generating Low Traffic Neighbourhoods — all in the name of saving the planet. And to hell with opposition from voters, including many of those in his own constituency.

Somehow, at least until this time next week, Shapps has ended up as Home Secretary.

Meanwhile Jeremy Hunt, who came bottom of the MPs’ poll last time round and has twice failed in his leadership ambitions, is for the time being the most powerful politician in Britain.

Strange cove, Hunt. Nice enough chap but a bit of a blank canvas. What we do know is that he was a passionate Remainer, who said in the wake of the Brexit referendum that the result would have to be ‘subject to democratic endorsement’. Eh? 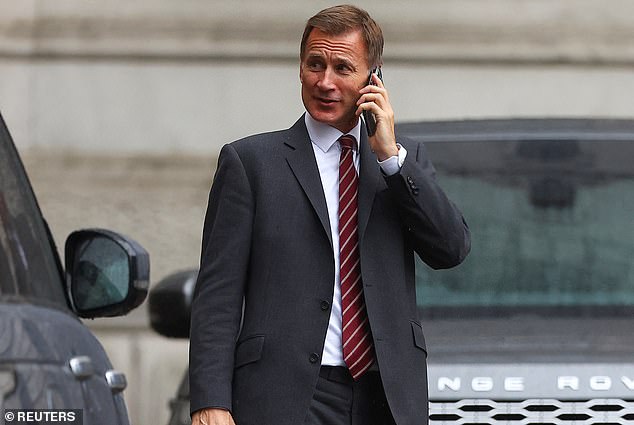 Hunt is lauded for his six years as Health Secretary. But what did he actually achieve?

What’s the biggest single popular vote for anything in British history if not a democratic endorsement?

Hunt is lauded for his six years as Health Secretary. But what did he actually achieve? Despite swallowing more than 40 per cent of the Government’s day-to-day spending, waiting lists have actually risen to a shameful seven million. And still we are told the NHS is the envy of the world.

Hunt is also a full-on Sinophile, whose Chinese wife has appeared regularly as a commentator on a TV programme controlled by the Chinese Communist Party.

During the pandemic, he endorsed the Beijing government’s oppressive total lockdown policies aimed at achieving Zero Covid, though he did concede (reluctantly?) that perhaps importing them wholesale to this country might be a bridge too far.

If a foreign power had set out to utterly undermine and discredit both Brexit and the British Government, they couldn’t have achieved a more stunning success. 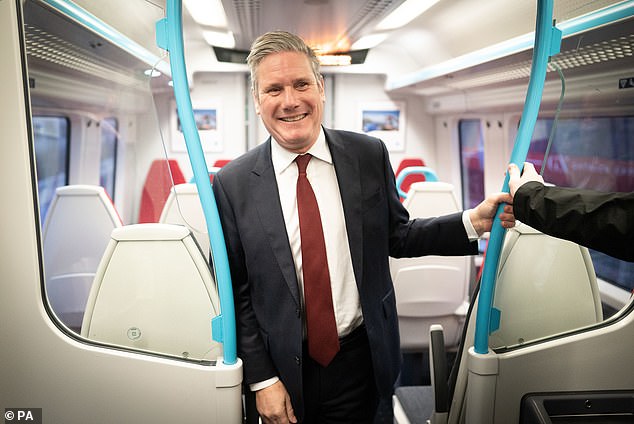 Starmer may be a shoo-in for PM at the next election, but he’s no respecter of popular democracy

Over the past few days, the bizarre shenanigans at Westminster have been beyond the most outlandish imagination of any TV scriptwriter — even those who came up with such intelligence-insulting nonsense as BBC drama The Bodyguard, starring the ubiquitous Keeley Hawes as a Fizzie Lizzie-style minister.

It’s been more like an episode of Gerry Anderson’s Thunderbirds. Anything can happen in the next half hour! To be honest, I still haven’t quite worked out whether the chief whip and her deputy have actually resigned or not. Who could blame them if they did? Herding feral cats would be a piece of pickle by comparison.

What would possess any party to elect a new leader then jettison her six weeks later? This is the stuff of banana republics.

In the event, Truss imploded under self-inflicted pressure.

But if MPs didn’t want her as Prime Minister, they shouldn’t have put her in the final two to go before the membership in the first place.

Judging by their antics lately, one can only assume the entire Parliamentary Conservative Party has taken leave of its senses — like one of those Waco-style suicide cults who pop up regularly in the U.S.

At a time when the economy is going to Hell in a handcart and a Russian jet was yesterday reported to have fired a missile at an RAF patrol, MPs from what passes as our governing party were squabbling among themselves like children fighting in a primary school playground. 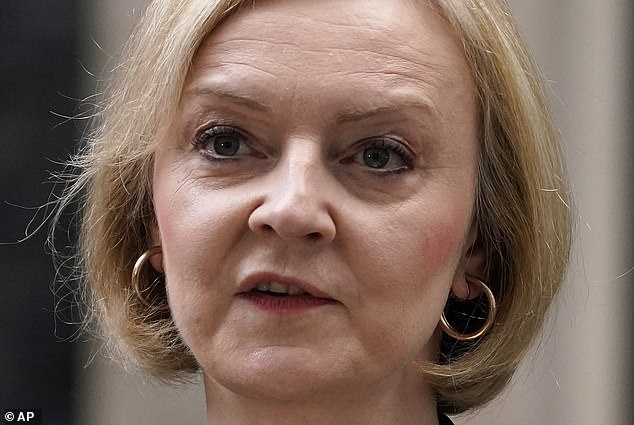 If MPs didn’t want her as Prime Minister, they shouldn’t have put her in the final two to go before the membership in the first place

The scenes in the Commons on Wednesday night were pathetic, with grown men and women claiming to have been ‘bullied and manhandled’ into the voting lobbies.

And who were these alleged bullies, strong-arming them? Therese Coffey and Jacob Rees-Mogg. We’re not talking Ron and Reg Kray here, are we?

For heaven’s sake, grow up the lot of you.

All this hysteria has been unfolding without any reference to the voters they are paid handsomely to represent. As I wrote on Tuesday, those of us outside the Bubble have only been able to look upon this juvenile circus with growing disgust and disbelief.

Just when you thought politics couldn’t sink any lower than they did during that gurning gargoyle Bercow’s disgraceful attempts to pervert Parliamentary procedure to prevent Britain leaving the EU, once again the politicians have lived down to our worst expectations.

(And I still haven’t got round to Nonce Finder General Tom Watson’s shameful elevation to the Lords. Don’t worry, I will.)

Two and a half years ago, we gave an 80-seat majority to a democratically elected Conservative Government led by Boris Johnson, which pledged to get Brexit done. 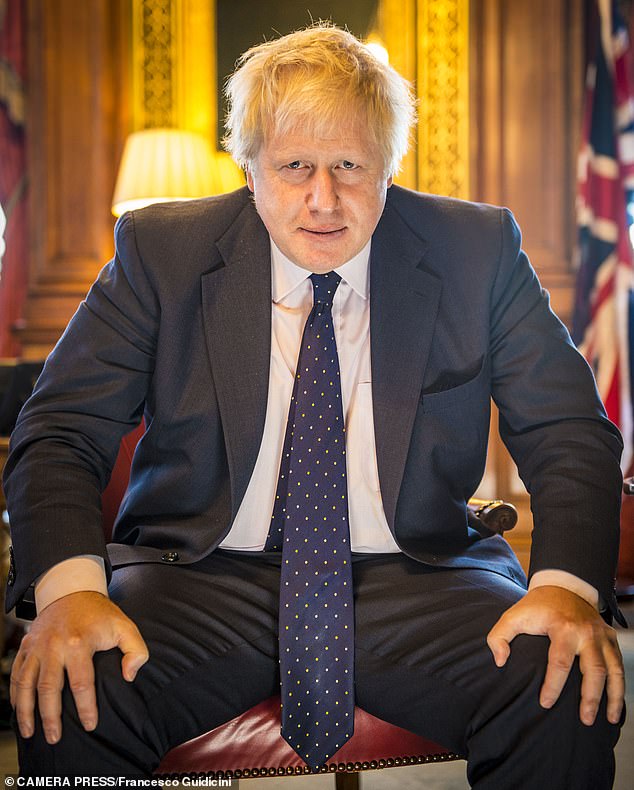 Last night, it looked as if Boris was trying to make an unlikely comeback, only a few weeks after he left office. Stranger things have happened

We’ve ended up with a palace coup staged by Remainers, determined to keep us in lockstep with the EU, even if they can’t formally make us rejoin.

Last night, it looked as if Boris was trying to make an unlikely comeback, only a few weeks after he left office. I can’t see the dripping wet, EU-diehard, Tory grandees who have now ‘taken back control’, so to speak, putting up with that under any circumstances.

Even if Boris could persuade enough MPs to put him in the play-offs, and then convince the membership to return him to No 10, the fierce resistance from the now dominant Remain faction would make the toppling of Truss look like a Teddy Bears’ picnic.

Still, stranger things have happened. Mind you, I was only half-joking when I suggested that the likes of Hunt and Shapps would be happier serving under Prime Minister Starmer than a Brexiteer.

Yes, Starmer may be a shoo-in for PM at the next election, but he’s no respecter of popular democracy either. He spent four years trying every parliamentary and judicial trick in the book to Stop Brexit.

He might be calling for an election now, because he thinks he’d walk it, but in truth Starmer’s no more a fan of letting the little people have their say than Tories such as Hunt and Shapps.

If they thought they could get away with a Government of National Unity, without the inconvenience of having to consult voters ever again — in the interests of stability, you understand — believe me, they would.