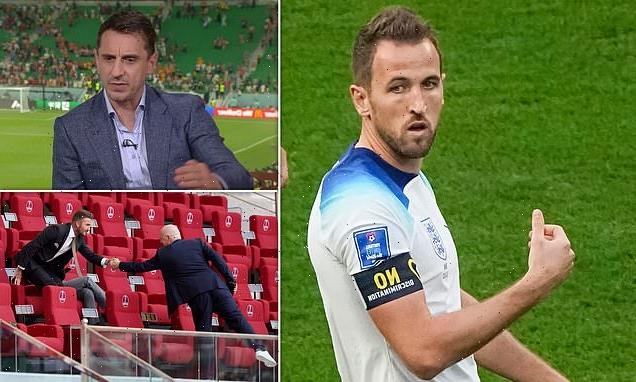 RICHARD LITTLEJOHN: In football, principle is somewhere over the rainbow… Venality and self-interest will always trump virtue signalling

So much for taking a stand on principle. That went straight out of the window when England’s footballers realised there might be some personal sacrifice involved.

They dumped the ridiculous rainbow armbands plan the moment FIFA, football’s governing body, threatened to book any player wearing one.

Presumably, if Harry Kane or anyone else had refused to take it off, despite being given a yellow card, he’d have been shown red.

And if he’d insisted on wearing it in any subsequent games from which he wasn’t automatically suspended, that would have been the end of his World Cup. For you, English Tommy, the tournament is over.

England’s intention to use the World Cup stage as a platform for yet another bout of self-serving virtue signalling was always going to implode on exposure to harsh reality.

FIFA’s corrupt officials have been bought and paid for by the charmless Qataris and were never going to permit anything which might upset their hosts and benefactors.

What on earth convinced the England team that flaunting their support for the LGBTQWERTY+ rights in a Middle Eastern autocracy where homosexuality is punishable by death was a no-cost option? 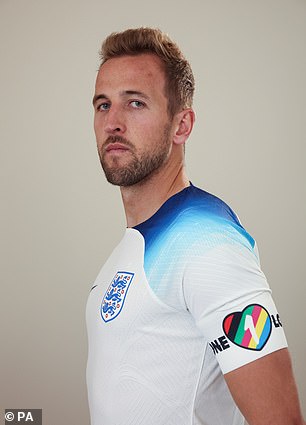 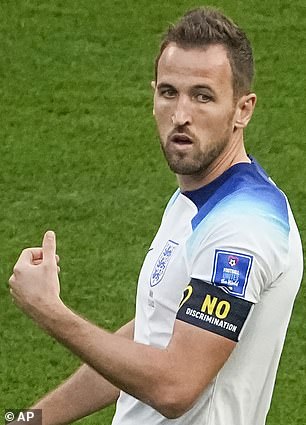 Harry Kane (with One Love armband on left; without, right) can consider himself lucky that the local sharia morality police didn’t drag him from his team hotel and toss him off the roof of the nearest skyscraper

Kane can consider himself lucky that the local sharia morality police didn’t drag him from his team hotel and toss him off the roof of the nearest skyscraper.

The Qatari royal family had earlier stressed their determination to crack down on Western decadence by banning alcohol from all but a few select outlets.

While I don’t doubt that some players are sincere in their commitment to gay and trans causes — right down to their pretty little rainbow laces — the capitulation over the armbands merely serves to highlight the fact that football’s embrace of all things woke is purely cosmetic.

These cynical displays of ‘compassion’ and ‘solidarity’ are designed to deflect attention from the shameless venality of the professional game, one of the most amoral industries on the planet, especially England’s Premier League.

Wearing the armband in Qatar was just another public relations stunt. When that was disallowed, the players revived the fatuous ‘taking the knee’ gesture, in support of Black Lives Matter, before the game with Iran kicked off yesterday.

Why? And would they have done it if FIFA had made ‘the knee’ a bookable offence, too? The brutal murder of a black man by a rogue policeman in Minneapolis never had any relevance in Britain, let alone Qatar. Yet football decided to exploit the statue-toppling Summer of Stupidity which followed as a marketing tool to burnish its woke credentials. 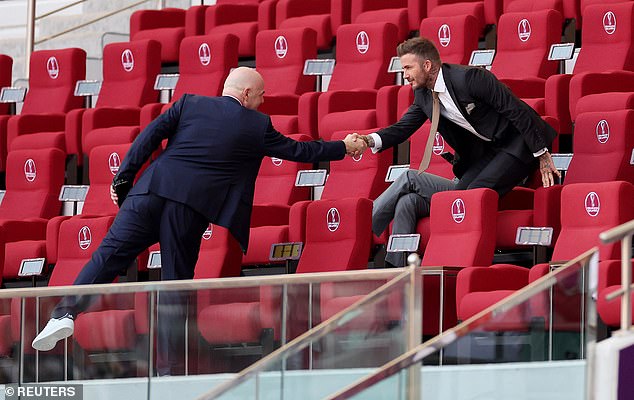 The hypocritical Beckhams and Nevilles of this world are more than happy to fill their boots with the Qatari shilling. Pictured: Beckham with FIFA president Gianni Infantino at the England vs Iran game

Look, this isn’t a dig at Harry Kane, a supremely gifted footballer who always comes across as a decent, dedicated professional athlete and an exemplary role model. But has he, or any other player, ever bothered examining some of the aims of organisations they are so publicly supporting, including Stonewall and BLM?

Do they approve, for instance, like Stonewall, of women’s safe spaces, such as changing rooms and female-only toilets, being open to biological males? Do they really back BLM’s Marxist-inspired agenda, including defunding the police and smashing capitalism?

Yet this dangerous, revolutionary nonsense is routinely brushed under the carpet.

As England took the knee again yesterday, the BBC commentator defended the players’ action by stressing that it was their duty to demonstrate to young people around the world the importance of ‘inclusivity’.

No, it isn’t. It’s their job to play football, to entertain, to provide escapism. The World Cup should be a celebration of international sport, a unifying force bringing disparate nations together, if only for a few weeks.

Instead, the run-up to the tournament has been dominated by squabbles over human rights, modern slavery and, inevitably, climate change. It peaked with that bizarre rant by Fifa president Gianni Infantino trying to justify his organisation’s disgraceful decision to award the World Cup to such an utterly unsuitable nation by accusing Western countries of hypocrisy.

In his surreal monologue, he maintained he could empathise with gays, the disabled and migrant workers because he had been bullied as a child over his red hair and freckles.

I’m only surprised that the England team hasn’t decided to take to the pitch wearing Russ Abbot-style orange wigs in a show of solidarity with oppressed members of the worldwide ginger community. Give it time. 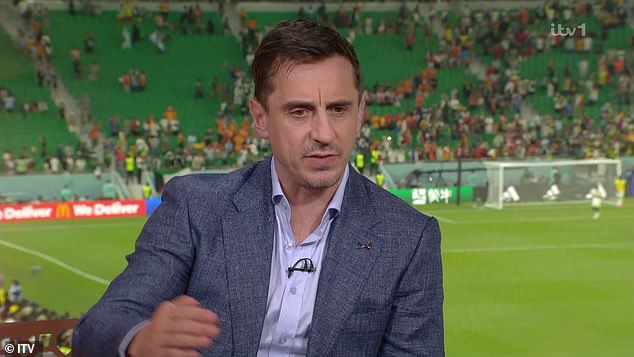 No amount of ‘raising awareness’ is going to alter Qatar’s stance on homosexuality, slavery or women’s liberation. Pictured: Gary Neville who has come under criticism for being part of Qatari broadcaster beIN Sports’ commentary team

Meanwhile, the BBC’s Match Of The Day before the opening game on Sunday was more like a conscience-salving party political broadcast on behalf of Amnesty International.

Bit late for that kind of performative hand-wringing, I’m afraid. If everyone had such serious qualms about Qatar’s well-known appalling human rights record, they should have grown a backbone and told FIFA that they were boycotting the tournament.

None did. And, sadly, there was never any chance of a last-minute change of heart. As Baddiel, Skinner and the Lightning Seeds didn’t sing: No one’s staying home!

If global warming is the most important ’emergency’ facing the planet, why award the World Cup to a country which owes its enormous wealth to the production of filthy fossil fuels? 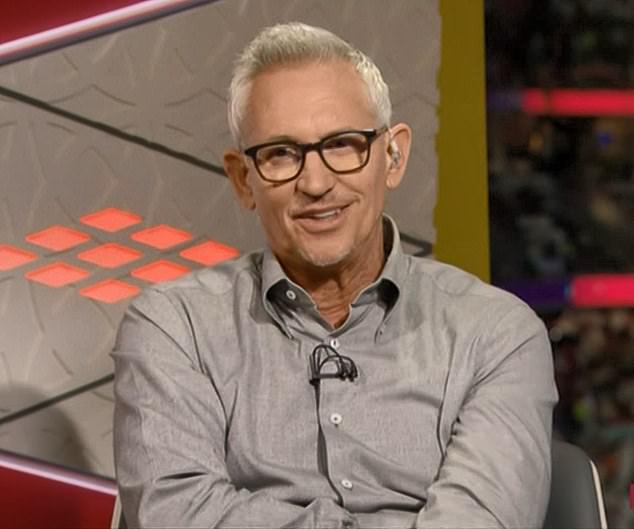 Meanwhile, the BBC’s Match Of The Day before the opening game on Sunday was more like a conscience-salving party political broadcast on behalf of Amnesty International. Pictured: Gary Lineker discusses the controversial topics before the opening World Cup fixture

But FIFA’s rotten, rapacious bureaucracy had no problems trousering who knows how much money in tainted, oil-rich bribes, secure in the knowledge that not a single world football federation would stay away — just as the hypocritical Beckhams and Nevilles of this world are more than happy to fill their boots with the Qatari shilling.

No amount of ‘raising awareness’ is going to alter Qatar’s stance on homosexuality, slavery or women’s liberation. And now that the tournament proper has started in earnest, we are all expected to forget about that and concentrate on the ‘beautiful game’.

When it comes to football, venality and self-interest will always trump virtue signalling. Rainbow armbands or no rainbow armbands.

Cancel culture has reached the quiet Dorset village of Ansty, where a charity production of Aladdin has been scrapped following a single complaint.

The Mail on Sunday reports that the pantomime, which has been a mainstay of the Christmas season for four decades, stands accused of ‘cultural insensitivity’ because it features Chinese laundry workers called Chop Chop and Wishy-Washy.

Someone objected that these stereotypes could upset audience members from ethnic minorities — and the producers immediately caved in.

As a result, a local bowel cancer charity and the air ambulance service will miss out on hundreds of pounds in donations.

Why does anyone listen to these preposterous complaints? Who could possibly take offence? Ansty isn’t exactly a hotbed of multiculturalism. The village doesn’t even have a Chinese takeaway.

But these days all it needs is one self-appointed censor to sabotage the enjoyment of others.

Trigger warnings are becoming standard in the theatre. At the Arcola in Dalston, East London, the audience is advised that A Dinner With Groucho features a ‘prop cigar’. Not even a real one.

As that fine actress Maureen Lipman grumbled: Groucho Marx without his cigar is like a footballer without a tattoo.

And what can you say about the ultra-sensitive producers who agreed to the trigger warning? How about: wishy-washy.

Some years ago, I was invited to judge a local newspaper columnist of the year competition. Most were pale pastiches of the stuff which appears in the nationals.

But one stood out, like a beacon in a bog. It appeared under a nom de plume in a Devon and Cornwall freesheet and was a wonderfully splenetic tirade against ‘grockles’ — slang for holidaymakers.

The author had a particular hatred for visitors from the Midlands, who clog up the roads with their caravans.

I can’t remember who wrote it. Perhaps it was Cornwall’s outgoing tourism chief, Malcolm Bell, who marked his impending retirement with a foul-mouthed blast worthy of local second home owner Gordon Ramsay. 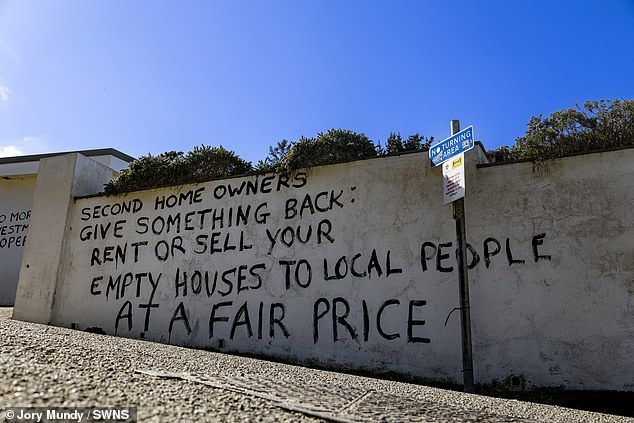 Bell slammed ‘bloody tourists’ and ‘effing emmets’. Only he used stronger language than effing. Emmets, like grockles, is another popular term of abuse for outsiders. Pictured: Angry vandals targeted a second home in Cornwall with graffiti in March

Bell slammed ‘bloody tourists’ and ‘effing emmets’. Only he used stronger language than effing. Emmets, like grockles, is another popular term of abuse for outsiders.

He was upset that because Covid stopped people going abroad for two summers, ungrateful, stroppy holidaymakers flooded Cornwall instead, frightening the famous leprechaun-like Cornish Piskies in the process.

Bell may be right. But given that the region’s economy relies on tourism, they certainly don’t mind cutting off their noses to spite their face.