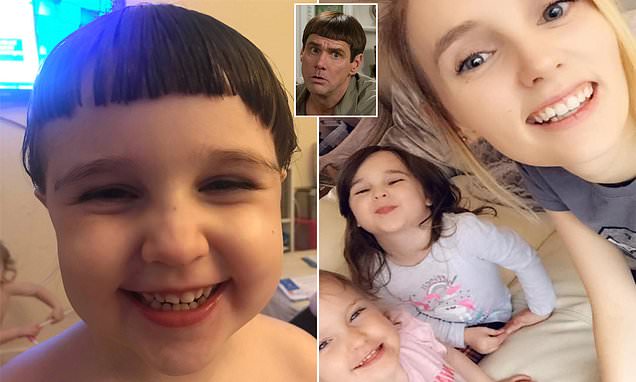 A fringe benefit! Mother is mortified after accidentally giving her daughter, three, a Dumb and Dumber-style haircut – only to discover the little girl LOVES it

A mum was left ‘mortified’ after accidentally giving her daughter a ‘bowl’ style haircut – only to find out the little girl loved it.

Rebecca Asquith, 23, from Leigh, Greater Manchester, tried to give daughter Ava’s lengthy fringe a quick trim after she frequently complained about it being in her eyes.

Tying her daughter’s hair into a bun, she dampened and parted the three-year-old’s Hair before starting to snip.

But after the first few cuts, the mum-of-four realised her daughter’s fringe was uneven and kept cutting in a desperate bid to correct her mistake, but ended up trimming three inches.

But as Ava’s hair began to dry, the full glory of her work was unveiled with the fringe riding high up her forehead, in a similar style to Jim Carey’s haircut in the 1994 hit film Dumb and Dumber.

Luckily, though Ava was very impressed with her new look and even ‘jumped for joy’ when she saw it. 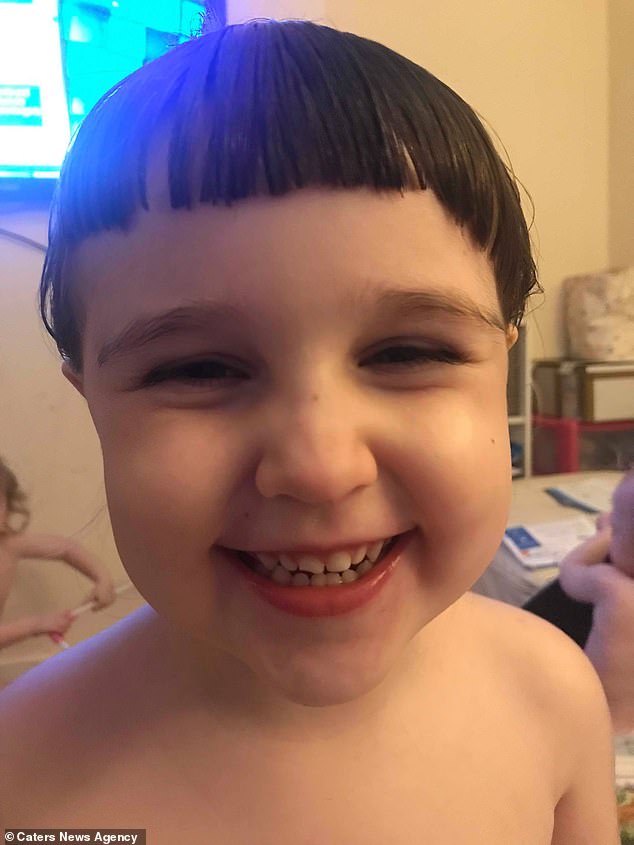 Rebecca Asquith, 23, from Leigh, Greater Manchester, tried to give daughter Ava (pictured)  lengthy fringe a quick trim after she frequently complained about it being in her eyes

Horrified, Rebecca initially called her sister in desperation but quickly discovered there was no need for panic.

After Ava caught her reflection in the phone, she jumped around with joy professing to love her new ‘do.

Rebecca said: ‘Ava was moaning about her hair getting in her eyes and I’d had enough.

‘I decided to get the scissors and give it a quick trim but it went a bit wrong. 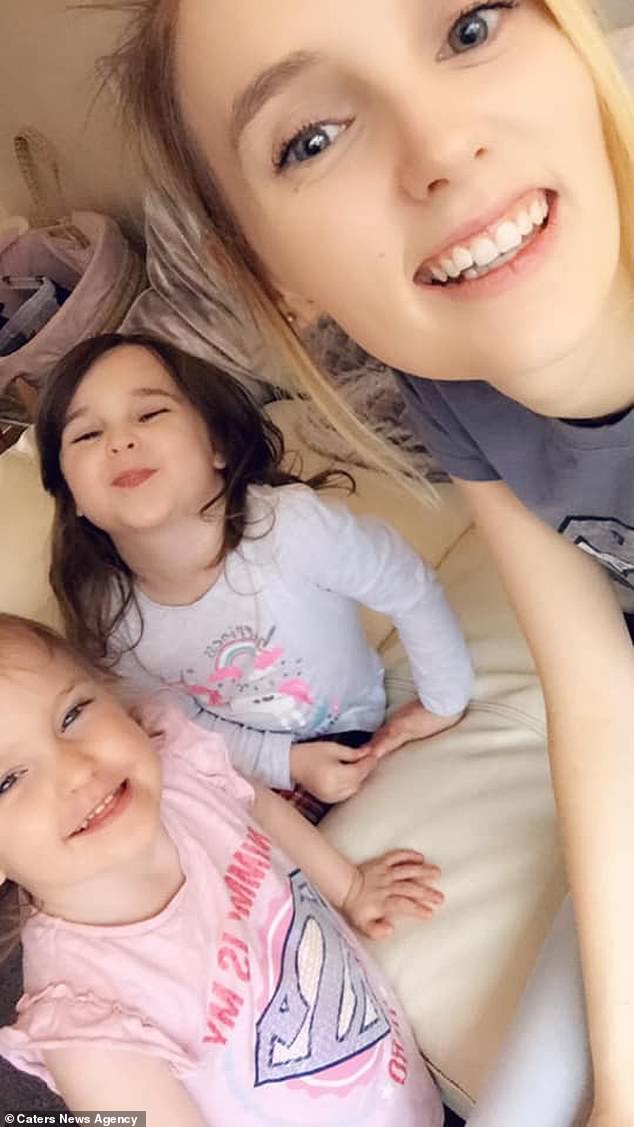 Ava previously had long hair, but complained that it got in her eyes (pictured with Mum Rebecca and sister Isabella) 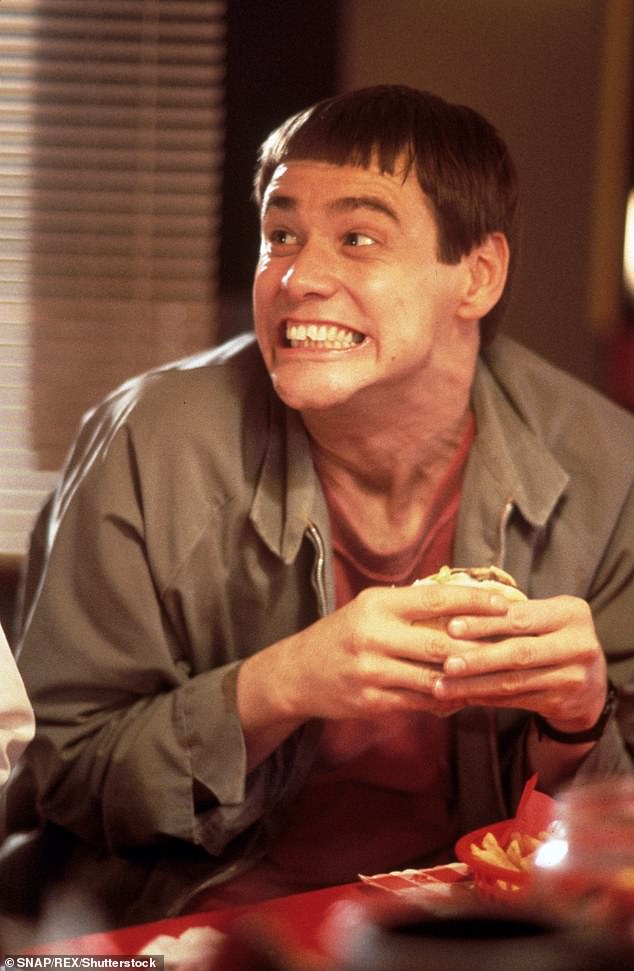 Ava’s hair began to dry, the full glory of her work was unveiled with the fringe riding high up her forehead, in a similar style to Jim Carey’s haircut in the 1994 hit film Dumb and Dumber

‘The one side was higher than the other and so I evened it out, over time we lost more and more length.

‘When I brushed it all out I realised “Where has her hair gone?” and saw it all on the floor.

‘I expected it to be a bit longer than it was, but it kept on shrinking the dryer it became, I even tried to use a hairdryer to give it more volume.

‘I was mortified when I facetimed my sister to say, “Oh my god help me”.

‘But when Ava saw herself she loved it and was jumping up and down laughing.

‘She is only three, so she just loves having the hair out of her face. 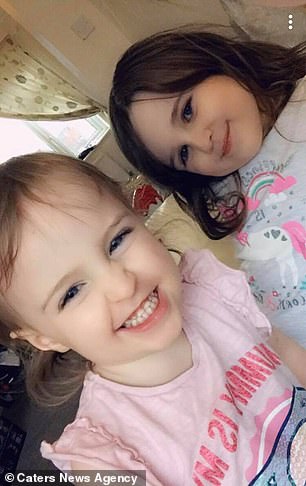 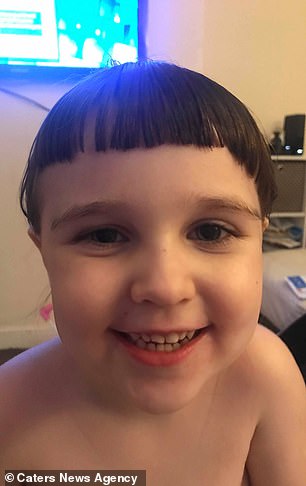 Before and after: Ava’s hair previously fell into her face (left with sister Isabella) but she loves her new shorter fringe (right)

‘I could have had a meltdown but she is chuffed it’s out of her eyes and she hates wearing bobbles because they pull her hair.

‘I was expecting her to be devastated, she is one of those children who wants their hair in a ponytail one day and plaits the next.

‘But she was laughing about it and was made up.

Since sharing the post online, Rebecca has received more than 5,000 comments and over 1,500 shares.

Comments range from shock to laughter, disgust and some admitting to the same faux pas, but the mum says she is ignoring the haters.

Rebecca said: ‘Most people are like “Oh my god, we have done this”.

‘Some are like “Poor sod, can’t believe you did this to your child” but I didn’t do it intentionally.

‘I was shocked by how many shares and comments, but I’m glad a lot of people can relate and I’m not alone.’

The mum intends to take her daughter to nursery tomorrow but more than likely expects everyone to be frankly honest about her hairdressing skills. 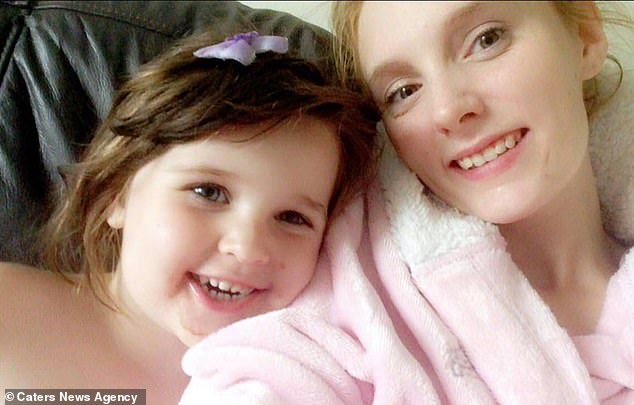 Since sharing the post online, Rebecca has received more than 5,000 comments and over 1,500 shares

Rebecca added: ‘I’m really friendly with the nursery staff, we will have a joke there.

‘They won’t be like “Oh she looks lovely” they will tell me what they think and will have a laugh.’

Rebecca said she is relieved her daughter liked her super-short fringe and admits despite home haircuts having gone well in the past, that she intends to hang-up her scissors once and for all.

She said: ‘I think it’s definitely an end for my hairdressers career, I don’t’ think any salons will be taking me on any time soon.

‘If I didn’t laugh I would cry about this. Until it grows back we will just have to put some pretty bows in.’