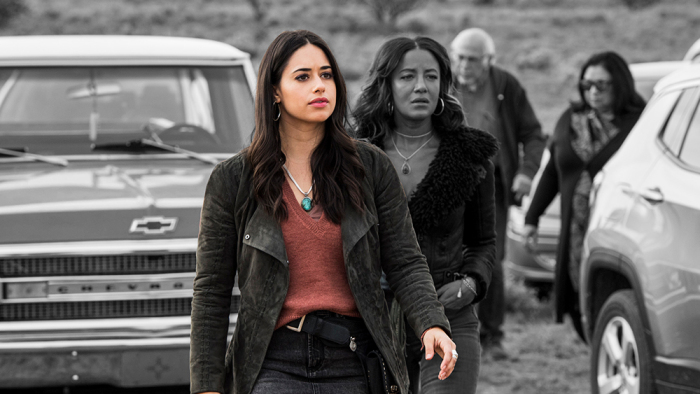 The series is the second adaptation of the “Roswell High” book series by Melinda Metz. The first series premiered in 1999 and starred Shiri Appleby as the main character, Liz Parker. However, the CW version of the show reverts the character back to being the Latina Liz Ortecho, as in the novels, a significant choice according to Mason.

“It never struck me as anything other than a great idea to reboot this property, primarily because she’s Liz Ortecho, and that is honoring the book series and there was so much of the story left to explore,” Mason says. “A lot of it lies in the fact that the lead woman is Latina, and she’s ignited, she’s on fire, she’s a scientist, she’s a curious a protagonist who is jaded, and she has her world turned upside down by this big secret that’s revealed.”

Mason is probably best known for winning “So You Think You Can Dance” when she was just 18 years old and “four days out of high school.”

The former “Grey’s Anatomy” star says one of the reasons she was attracted to her latest role was the physicality of the character, which allowed her to bring her prolific performing background to the part.

“I love true showmen, that’s a little bit of everything, the singing, the dancing, the acting, using your vessel from head-to-toe to be involved in every moment of your artistry, and I think you see a lot of my dance training in Liz Artecho,” Mason says. “She’s a very physical woman, she is rooted firmly into the ground, her feet are planted, she speaks in a lower register and she carries all of her intelligence and that requires a spine, it’s all connected.”

“Roswell, New Mexico” represents the third show, after “Grey’s” and the ABC Family show “Bunheads,” that Mason has worked with female showrunners, and the actress says that they each gave her the courage and support she needed to feel confident in taking on big roles.

“This was an incredibly daunting task, particularly being the Latina lead of a broadcast television for the first time. But it just seemed like it was not that far of a reach, and I think it’s because I came from all of these women encouraging me and telling me I was capable and telling me I was great,” Mason reveals.

As for a prospective season two for “Roswell,” Mason is keeping her “fingers firmly crossed.”

She adds that she would love to see more of the show’s undocumented storyline, which was established in season one.

“It would be so powerful to create this visual so that people can see, with the perspective of a young person, what it feels like to have someone you don’t know walk into your house, detain your parents, remove them, and seem like this giant shadow,” Mason concludes.

Later in the show, critics Daniel D’Addario and Caroline Framke preview Netflix’s “Turn Up Charlie” and Hulu’s “The Act.” Finally, TV writer Will Thorne talks about the college bribery scandal that has ensnared actors Felicity Huffman and Lori Loughlin.