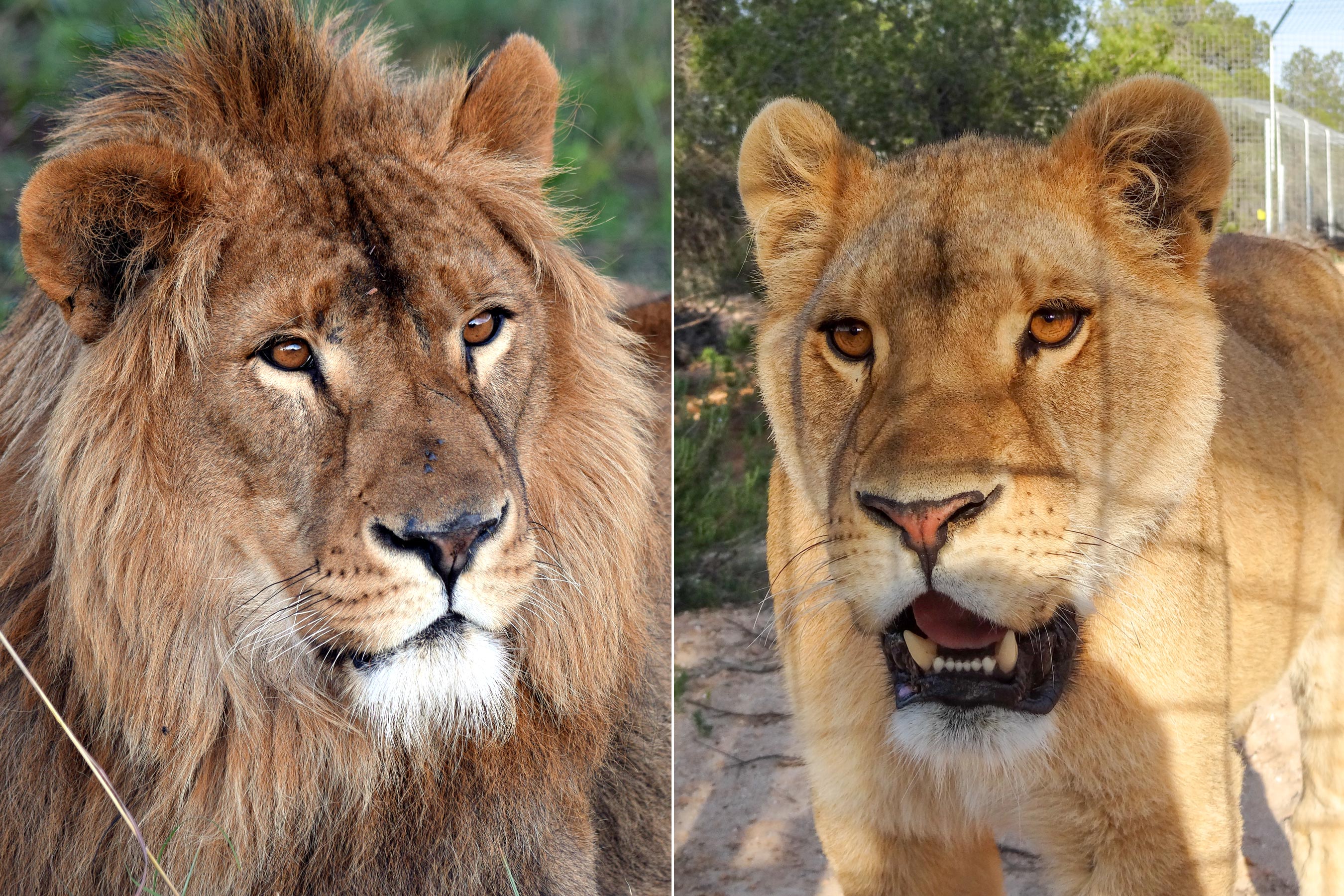 Last week PEOPLE reported on a wild baboon holding up a baby monkey Lion King-style. Now we have an epic tale of feline love and war that rivals anything Disney could make up.

On Oct. 11, South African big cat sanctuary LIONSROCK and animal advocacy group Four Paws International played matchmaker for two second-chance lions. One of the cats, Saeed, made headlines across the globe last February when he survived a harrowing rescue from a zoo in Aleppo, Syria. Just more than one year later, the confident 2-year-old male cat is the perfect age for socialization.

The leader of his rescue mission, Dr. Amir Khalil, tells PEOPLE, “All animals rescued from war zones are traumatized. There are huge problems that they face. But I see him after this period, after so many months, and there is incredible improvement. I can see him outside yesterday doing so well, and I feel he recognizes, ‘I’m African.’

“He knows he has a nationality [now]. He is touching grass for the first time in his life. He smells the African air. He hears other animals; he smells antelopes running outside and hears other lions roaring. He is in a semi-appropriate place, like nature. It’s not really the savannah, but somehow he’s retired now.”

“He’s very peaceful and relaxed, he’s no longer stressed. If a car passes, he’s not scared. Before, if an airplane passed, he’d remember the war, the bombs and explosions. He has memories. [The trauma] is not finished yet, he has a long way to go, but I’m very glad to see he’s thankful for his care team … and now we have to find the correct partner for him, so he’s not lonely. Just like a human being likes to have a partner to share their life with.”

Dr. Khalil considers the animals he rescues to be like royal ambassadors from Africa and says they deserve better than living in ugly, inhumane places. Nala, the lioness rescued from an illegal circus breeder in France, also experienced horrendous conditions in captivity.

“It was hell on earth,” says Animal Advocacy and Protection (AAP) CEO David van Gennep. In 2017, she was confiscated by the Dutch organization (which is a partner of Four Paws), and recently completed her rehabilitation in Spain. She was them transported to LIONSROCK, first traveling by road from Alicante to the Madrid airport, where she boarded a plane for the long flight to Johannesburg. From there, it was another three-plus hours to the Four Paws sanctuary outside of Bethlehem, South Africa.

“We assume that Saeed, who was born in captivity during the war, lived together with other big cats in Syria. He clearly shows signs that he needs company. With his new neighbor Nala we believe we have found the perfect companion. They now have all the time in the world to get to know each other through the fence. If there is interest on both sides, Saeed and Nala will move into a shared enclosure,” says Ioana Dungler, Director of the Wild Animals Department at Four Paws.

Nala arrived to the sanctuary grounds Thursday afternoon and her crate was driven across the 1,250-hectare sanctuary accompanied by a small squadron of staff who had high hopes that she’d hit it off with her new neighbor. However, Nala was nervous at first, hesitant to leave the crate.

Hildegard Pirker, Head of Animal Welfare at LIONSROCK, tells PEOPLE it takes upwards of three to six months, sometimes up to one year, to fully acclimate and socialize big cats when they first arrive to the sanctuary.

“We have seen that she’s extremely scared in the crate, that she might not even come out. We don’t know if she might run out and be frightened or stressed, or if she’ll stay in the crate,” Pirker explained during Nala’s release. “We don’t know the animal yet, and we need to handle and manage her afterwards, so it’s important that we check first to see how she’s doing before we let her out in a big area, where she’s scared and doesn’t know where to go. The smaller area for us is better to control and to see her close up, to see how she reacts.

“She’s used to people very much, but she doesn’t know what’s going on and she’s scared of what’s happening. Maybe she’ll be fine and friendly [once in the enclosure], but in the crate she is trying to hide. We always figure out what’s in the best interest for the animals. If everything looks fine and she’s not too stressed, perhaps we can [soon] release her to the bigger enclosure outside the gates. This is not easy, but it’s the better way for the animal.”

Once the sanctuary staff attached her crate to the drop gate such that all the gaps were closed, Nala’s crate was then opened and she was free to wander out into the smaller enclosure area or go inside her house. The whole process from arrival to release took about 30 minutes. Nala tentatively peeked her head out and surveyed her new landscape.

Nearby, Saeed had undoubtably caught her scent and sauntered around his neighboring enclosure, enthusiastically waiting for her to emerge. When Nala finally worked up the gumption to venture out, she made a run for it directly into her indoor habitat. Saeed was not perturbed. In fact, he was happily spraying his scent around the outside of the house, appearing quite confident, if not totally smitten.

LIONSROCK animal behaviorist Elke Sammer tells PEOPLE, “He’s very excited, he’s known something was up for a few weeks as we made preparations. It’s good they let Nala go into the small house, now they can watch each other from the window. They each deserve a new friend and life partner.”

Indeed, it is Four Paws’ hope that the cats will both blossom at LIONSROCK and find a new life and purpose together, which is much better than being alone.

Fiona Miles, the Country Director for Four Paws South Africa and LIONSROCK Director, tells PEOPLE, “We’ve been so blessed to have so much international support. A rescue is not only about an animal, it’s about everything those animals represent, whether they’re coming from a terrible zoo or a war-torn horrible place … when we’re lucky enough to socialize a lion with a lioness, and they both have similar personalities, and they’re so peaceful together, their companionship in the sun, for me, it’s a perfect example of seeing them strengthen and really become lions. I’m really hoping for this with Saeed and Nala. You know, they need that companionship to thrive.”

Miles says the lions are a similar age and similar temperament, but it will take time for them to get to know each other. Some big cat couples have taken a full six to eight months to complete the process of meeting each other and then moving into an enclosure together. “My colleagues will take time to observe them, to adapt to each other, to see how she’s responding. We can’t put a timeframe on it, it’s really up to them,” Miles explained.

Bigger groups of lions, i.e. the prides, live in large enclosures, but for the pairs, LIONSROCK has smaller adaption enclosures that are meant to socialize the newer animals.

“This allows them to be right beside each other and smell each other through the fence, to interact and communicate, but also so we can observe them. We need to see what they’re like, their medical condition. Many times we don’t know anything about where they’ve come from, what may be ailing them; these issues represent much later. It takes time,” Miles tells PEOPLE.

After a night spent getting acclimated, Nala finally got the chance to experience life in a natural African habitat — and on day two, she looked perfectly at peace in her new home.

Five days later, Nala and Saeed were getting along, mutually interested and getting to know one another. The lions are watching each other and communicating through a fence for now, but as they become acquainted and both feel secure, a full physical introduction will soon be in the works. Miles tells PEOPLE that in the beginning stages of matchmaking a pair of lions, there are certain behaviors the staff looks out for, including curiosity and “flopping down on their bellies.” In lion-speak, that’s a flirtatious welcoming.

Miles also predicted a massive welcoming of Nala from all the other lions on the grounds. “Normally, all the lions start roaring, it’s sort of a big welcome party,” she says. Sure enough, later that evening, a chorus of very vocal felines could be heard from a distance, sometimes roaring at each other in a kind of call-and-response way, and other times roaring in unison.

In addition to being an animal sanctuary, LIONSROCK is also a unique boutique hotel and award-winning lodge for humans. Visitors can commune with lions, tigers, zebras, antelope, wildebeest, wild horses and many more sanctuary animals, including dogs who live there (it’s pet friendly!).

LIONSROCK offers feeding game drives at sunrise and sunset, hosts special events on the grounds, such as engagements and weddings, and there’s also a medical office and education center on site for volunteers and visits from schools. The morning of Nala’s arrival, the sanctuary celebrated World Animal Day 2018 with a group of local children.

“I think [Nala and Saeed’s relationship] is all about hope. It’s about looking to the future and knowing that it’s possible,” says Miles. “They represent so many other animals who come here in terrible condition. If people can learn from them, and understand what they’ve been through, know that it’s possible to give them a good future, surely people can stand up and say we don’t want bad stuff to happen to them, we don’t want to support it, even inadvertently or by accident. We’d rather be able to come to a country like South Africa and see animals in the wild, and support sanctuaries that are doing good rescue work. We don’t want to support, volunteer or pay money to interact with wild animals because it’s not necessary.

“There is a hope for these animals if we can stop [illegal] breeding, and interactions [like cub petting], and stop wanting, as human beings, something for ourselves. The animal is getting nothing from you; you’re not doing it any favors. It’s much better to see wild animals in the wild, and to afford them that dignity and protection. It really is possible, it’s just a mindset change.”

To learn more about visiting LIONSROCK, click here. And if you’re inspired by Nala and Saeed’s developing love story, you can donate toward their care (and that of other needy animals) by giving online.