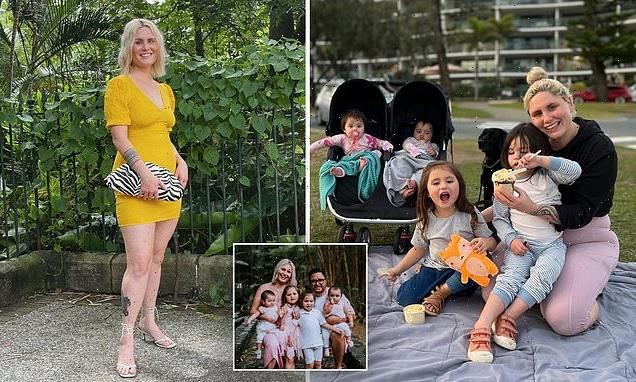 How blind mother 29, who’s been bullied and doubted her entire life for her disability is now the proud mum of four children under the age of four – despite a doctor’s heartless advice when she first got pregnant

Ebony Uamaki was bullied as a child for her blindness – but would have thought she left that behind her when she entered adulthood.

But that was nothing compared to what doctors first said to her when she fell pregnant.

Rather than congratulating her, her doctor actually questioned her ability to be a parent.

For Ebony, this attitude best sums up the biggest challenge she has faced in dealing with her disability; other people’s opinions and perceptions.

She’s overcome them all and gone on to become an inspiring mum-of-four, all of whom are under the age of four.

The now 29-year-old, from Brisbane, was diagnosed with retinitis pigmentosa (RP) at two with only five per cent vision.

Today she only has one per cent of sight remaining in her left eye, is blind in her right eye, and is able to only see shadows and determine whether it’s day or night.

This hasn’t stopped her becoming the happy mum to Arorangi, 4, Tavake, 3, and one-year-old twins, Manaia and Koia. 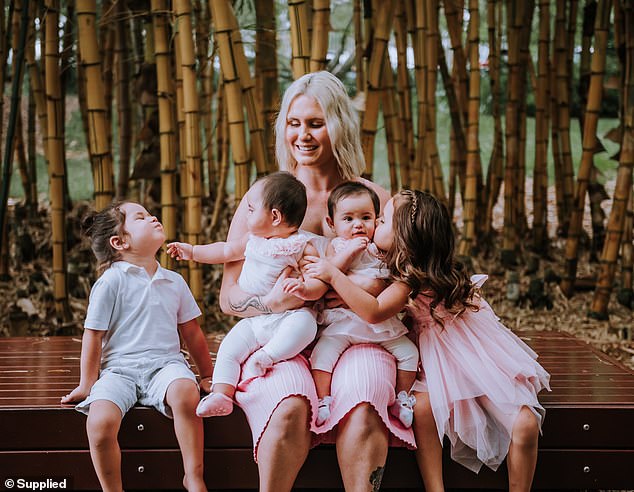 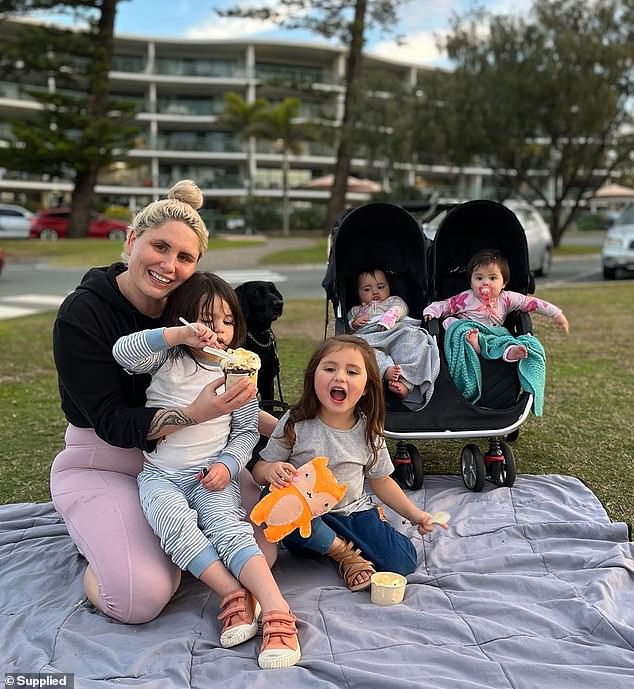 She knew the challenges she faced becoming a mum. She’s can’t drive, for example.

But far worse is the number of people who don’t believe she will be able to care for her children.

‘There was a lot of doubt around if it can parent because I can’t see and whether I would need a lot of help,’ she said.

Ebony met her Adam in mid-2016 and she fell pregnant by the end of the year.

In January 2017 and five weeks pregnant, the couple visited Ebony’s GP for a standard check-up and were excited to be parents – but instead faced tough conversations from her doctor.

‘She recommended termination on several occasions throughout the consult – which was quite shocking to me at the time – due to the fact that I could pass on the condition to my children,’ Ebony recalled.

Her ability to parent was also questioned by the doctor.

‘I left that consult feeling quite defeated and it brought up everything from the past,’ Ebony said. 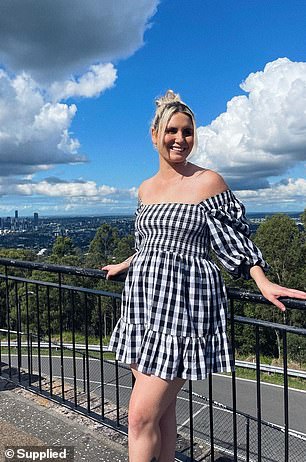 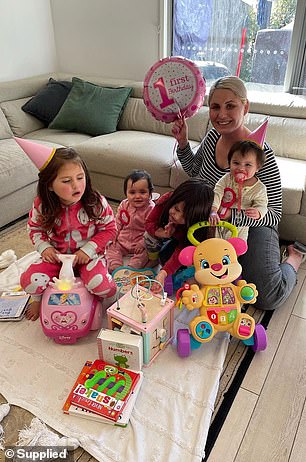 The inspiring mum said prior to becoming a parent she knew what her challenges would be, such as being unable to drive, and adjusted her life accordingly. When she fell pregnant in 2016 doctors recommended terminating the pregnancy

Eager to be a parent, she fell pregnant in April with her first child Arorangi, who’s now four.

‘I’ve always wanted to have children and to have a big family, because I came from one,’ she said. 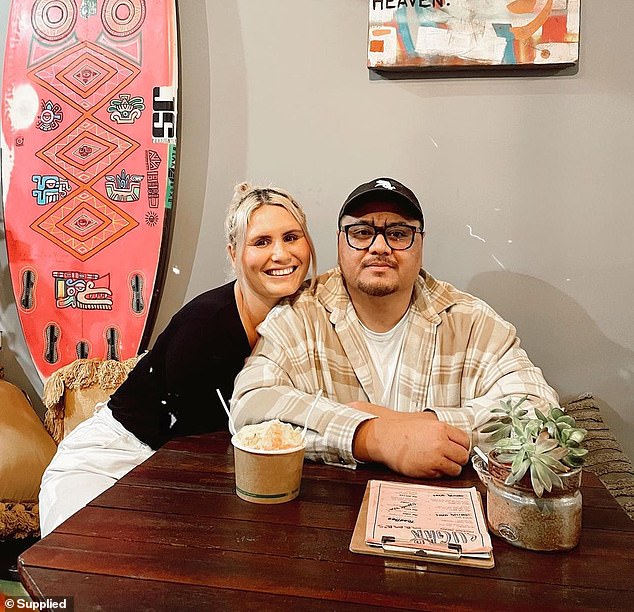 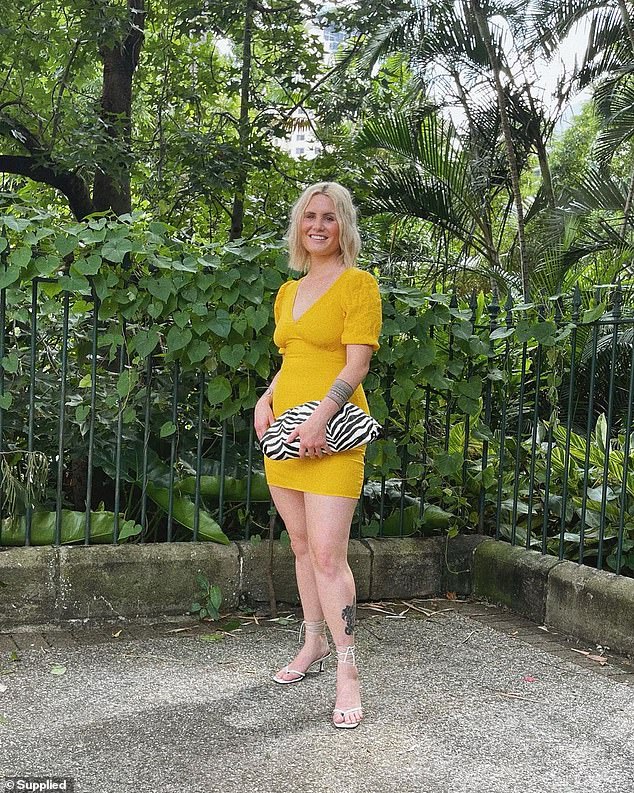 ‘I’ve always wanted to have children and to have a big family, because I came from a large family,’ she said.

Ebony is unable to leave the house with the kids unless someone else is with her, has help from a guide dog, but says just because she’s blind doesn’t mean she is unable to parent.

‘Logistically for me, because I can’t see I do things differently to other parents and find alternatives to the things I can’t do,’ she said.

For the family, communication is key and Ebony is open with her kids about her condition.

She’s also had to come to terms with the fact that she’ll never be able to see what her children look like or view any drawings they make.

Despite having poor eyesight as a child, she was still able to learn how to write, read and do day-to-day tasks.

‘I had already grieved the loss of my eyesight prior to having kids and adapted my life accordingly,’ she said.

What is retinitis pigmentosa (RP)?

Retinitis pigmentosa (RP) is the collective name for a range of diseases that damage the light sensitive cells of the retina and cause vision to fade.

There is currently no cure, and no treatments are available to slow the progression of disease.

It is often difficult to accurately predict how RP will progress with each person.

The condition was passed on from Ebony’s biological father who was diagnosed about the same time as her.

She said the condition isn’t common in toddlers but instead in teenagers and those aged between 30 to 40.

As a teenager Ebony wanted to keep her disability a secret and told few people.

‘I would often hide my disability and pretended like I could see, and others believed it,’ she said.

‘The word makes it seem like I can’t function, but I can, I’m just blind.’

Her first huge decrease in vision occurred when she was 16 and she lost so much eyesight that her eyes couldn’t focus anymore, causing them to shake.

Over time as her vision deteriorated she had to adjust her lifestyle, which was often frustrating and sad.

At age 14 she was also chosen to take part in the training squad for the Paralympics but she declined because she didn’t want everyone to know she had a disability.

‘I used to hate the word ‘disability’ but have come to terms with it now because I can’t change anything,’ she said. 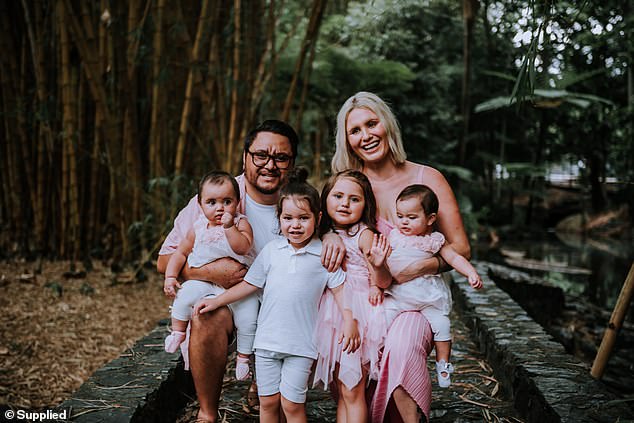 Because of her disability Ebony is unable to leave the house with the kids unless someone else is with her, has help from a guide dog and says just because she’s blind doesn’t mean she is unable to parent 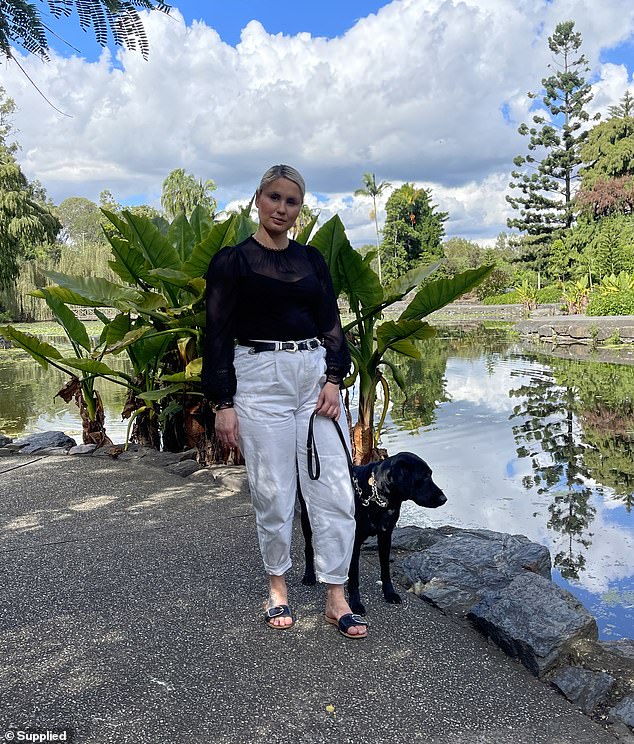 Ebony said her children show compassion towards her and understand she’s unable to see them.

‘It does tug at the heartstrings a bit knowing I don’t know what they look like but they understand and learn how to describe what they’re seeing to me,’ she said.

Her oldest children makes sure they clean up their toys so Ebony doesn’t trip over and always tell her where they are so she knows.

‘I’ve never doubted my ability to be a mum or do things,’ she said.