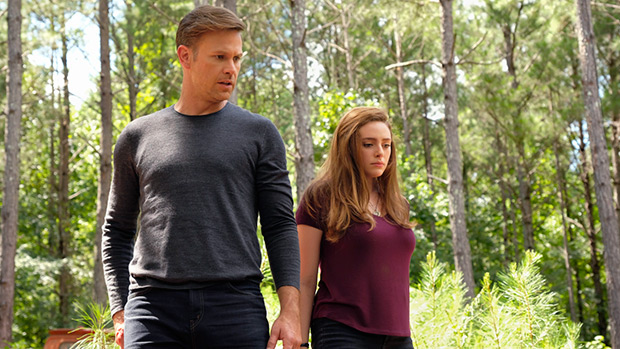 The search for Landon Kirby is on! On their journey during the Nov. 1 episode of ‘Legacies,’ Hope, Alaric, and Rafael encounter a creature none of them have never seen before.

Since she performed black magic to find Landon, Hope has to talk to the school’s guidance counselor, Emma. She covers for Josie when Emma asks her if she had any help. Hope doesn’t feel bad for using the black magic. She feels guilty because everyone’s at risk now because she trusted Landon. She’s determined to find Landon and get answers from him.

With finding Landon a priority, Alaric can’t make the twins’ game today. He’s the coach, but Landon can’t wait. All he asks of Josie and Lizzie is that they lose the game against Mystic Falls High. They can’t use their magic during the game at all and have to keep up the facade that they’re spoiled rich kids.

Rafael wants to go along with Alaric and Hope to find Landon. “You seem vengeful,” Rafael says to Hope. That’s an understatement. Hope shows Rafael what she saw on that bus. Alaric actually agrees with Rafael about coming along! Rafael doesn’t want to assume the worst about Landon like Hope is doing. They find a survivor during their search, and it appears she’s in shock. Rafael and Hope, who definitely have a connection, find Landon. He swears he didn’t burn those people.

He’s actually telling the truth. The survivor starts breathing fire and nearly burns Alaric! At first, Alaric thinks the woman is a pyromancer. Meanwhile, Landon is still getting grilled by Hope. He claims he doesn’t remember stealing the knife and lost it in the woods. Rafael believes him. Turns out, Landon is lying about the knife. He still has it, and the woman wants it.

As Hope and Alaric are trying to figure things out, the game is going down. Lizzie finally gets fed up with the Mystic Falls bullies. A little magic is used here and there, which goes directly against Alaric’s orders. Josie tells them that they have to lose. When Lizzie and the rest of the team don’t listen, Josie uses magic to make sure they lose. A fight ensues after the game is over when one of the Mystic Falls players pushes Lizzie too far.

Turns out, the woman is not a pyromancer, she’s a human dragon! Hope and Rafael team up to take her down, but the woman turns into a real dragon. As in a full-fledge Game of Thrones-esque dragon. Hope takes on the creature fearlessly. When she hesitates killing the human dragon, Alaric comes in for the save. Alaric finds evidence of Hope using black magic and calls her out on it. “This hatred, this vengeance, this is your father. It can’t be you. I won’t allow it,” he tells her.

By the time Hope and Alaric make it back to the car, Landon is gone. But he wrote Hope a heartfelt letter. He apologizes to her for hurting her. He promises her that her school secret is safe with him. Is this the end of Landon?! He can’t be gone for good!

Now that he’s seen a real dragon, Alaric is starting to worry about what else is out there. He knows that they’ve all gotten cozy and careless. He wonders how he is going to protect the kids from creatures are “not supposed to exist.” Speaking of things that are not supposed to exist, a gargoyle on school grounds comes alive. Poor Alaric isn’t going to get a moment to rest at this rate!