Cardi B is a huge Lady Gaga fan. During the 2018 award show circuit, she told an interviewer that Gaga is her dream musician to collaborate with. On her song "I Like It," there’s even a reference to the "Shallow" singer in one of the verses. The two finally met at the 2019 Grammys, but Cardi isn’t having the best time following her Best Rap Album win. But Gaga’s got her back. Lady Gaga’s tweet defending Cardi B is the exact kind of support we’re used to seeing from Gaga.

If you don’t know what all the Cardi B drama is right now, here’s the tea: Cardi B won Best Rap Album at the Grammys on Sunday, Feb. 10, very deservingly. But there are people on social media who apparently feel her album wasn’t deserving of the award and that it should have gone to one of the other men nominated in the category. (She was the only woman in the category and subsequently became the first female solo artist in history to win it.) As goes the internet, these people are bashing Cardi online as if it were her decision who wins and who doesn’t.

Cardi was so justifiably upset by the backlash that she ended up deleting her Instagram. But not before she posted a video calling the trolls out.

Now, Lady Gaga has come to Cardi’s defense on Twitter. 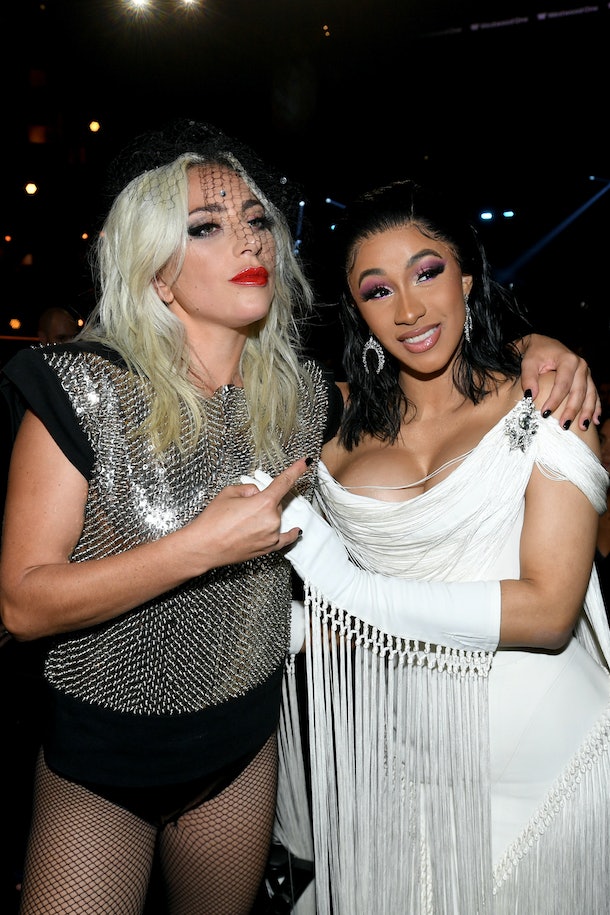 "It is so hard to be a woman in this industry," Gaga tweeted on Feb. 12. "What it takes, how hard we work through the disrespectful challenges, just to make art. I love you Cardi. You deserve your awards. Let’s celebrate her fight. Lift her up & honor her. She is brave."

Fans are happy to see a woman Cardi vocally idolizes so much show up for her.

Cardi is getting a lot of support from people in the music industry following this backlash. When she posted her reaction video to winning a Grammy on Feb. 10, Chance the Rapper left a long comment showing his love for the rapper. The post and comment are no longer accessible because Cardi deleted her Instagram, but hopefully it’s just deactivated and we’ll see her on the ‘Gram again soon.

"This is overly deserved, the album was front-to-back hits. It would be inconceivable not to honor u last night," Chance said. "So happy for you, u made history and u brought ur husband onstage who i saw literally making phone calls and trips to make sure n***** did right by u and turned they verses in on time."

"Look man u need to live in this moment for awhile!" the rapper, who won Best Rap Album in 2016, continued. "Straight up bask in it YOU deserve it. Its a feeling very few will ever know, but YOU do. God bless see yall soon."

Everyone just needs to let Cardi live, OK?! Invasion of Privacy was great. If you don’t think so and think someone else should have won, take it up with the Recording Academy.