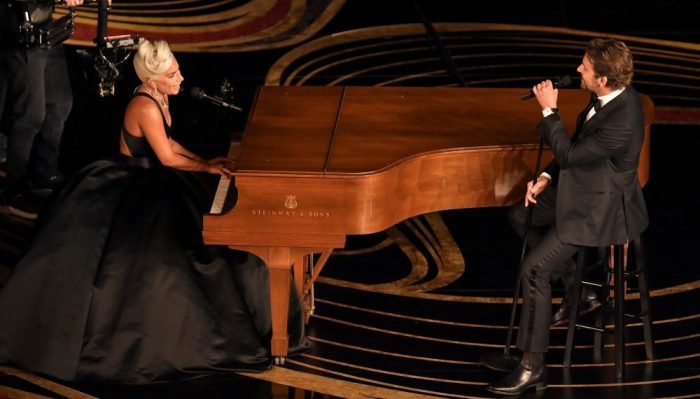 Lady Gaga and Bradley Cooper were the only musical act at the Oscars this year who got to sing their song at full length, at three and a half minutes, instead of condensed down to two. Given how captivating their performance of “Shallow” was, the Academy might have wished it were actually a little longer. Most everyone in the viewing audience did.

This was a song that someone had decided needed no introduction, as Gaga and Cooper made their way onto the stage from the audience while the crew was still changing the set, as if they’d spontaneously decided to pop up for a jam during a commercial break. It took everyone in the theater and and at home a moment to realize that the big number of the night had actually commenced — and inside the theater, many gasped when the realization struck. The duo took their positions at opposite ends of a piano, at which Gaga took her time sitting down, while the camera slowly swooped around them  — an unbroken, single shot that consciously echoed the performance footage in “A Star Is Born,” which was nearly all shot from a similar vantage point, facing out toward the audience.

Eventually, after an impressive recreation of Gaga’s mid-song aria, Cooper came around and sat next to her on the piano bench for some final harmonizing and — severe enduring chemistry alert — heads resting together.

At the Grammys two weeks prior, Gaga had rocked out the power ballad with a glam-rock look, leading to the correct supposition that she was saving a mellower sound, or at least look, for the Academy Awards.