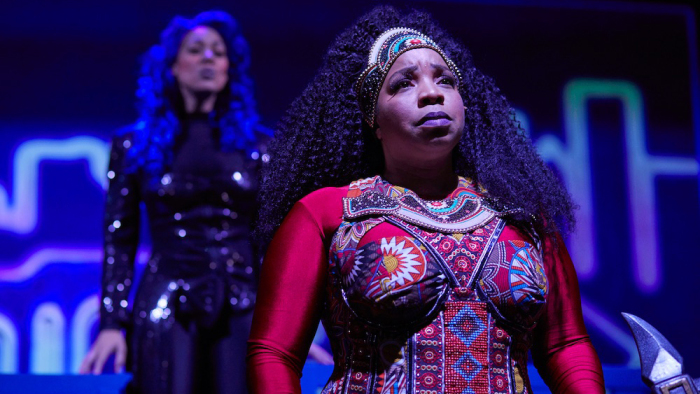 What function do superhero stories play in American society? Are they merely escapist distractions for head-in-the-clouds teens, or could those same formats actually serve a practical function, providing useful tools for everyday life? Recognizing these comic book fantasies as by far the dominant form of contemporary mythmaking for a generation of young people, emerging playwright Inda Craig-Galván coopts the genre’s pulp style and storytelling tropes to address another, more disturbing trend — the actual shooting of unarmed black youths by police officers — in her new play “Black Super Hero Magic Mama.”

Act One takes place in the “real world”: a Chicago bedroom where 14-year-old Tramarion Jackson (Cedric Joe) prepares for a quiz show dedicated to African-American history, and later, after a trigger-happy cop mistakes his trophy for a gun in a dark alley, where his mother Sabrina (Kimberly Hébert Gregory) sits stunned by grief, unable to engage with the TV news reporters (Reiko Aylesworth, Kevin Douglas) and protest rally organizers expecting her to speak out. Act Two reinvents the same space as a wildly expressionistic comic book come to life, bringing back all the same cast members, now elaborately made over as heroes or villains to be confronted in a hyper-kinetic quest of some kind.

Debuting on the Geffen Playhouse’s modestly-sized Audrey Skirball Kenis Theater, “Black Super Hero Magic Mama” represents no shortage of vision or ambition, in concept or in execution — which involves a rotating set and sophisticated projection system — but still feels rough at the script level. Here is a case of Geffen artistic director Matt Shakman, just 18 months into the job, taking bold gambles on new voices, and while that’s an impulse to be encouraged, there’s still much work to be done on this show before it migrates to a bigger stage.

Skipping around in time before lunging into the realm of full-blown, flamboyant fantasy, Craig-Galván’s approach is undeniably dynamic, and certainly different from what most theatergoers are accustomed to seeing on stage. But it’s also fundamentally confusing, as Craig-Galván attempts to bring cinematic devices — including flashbacks, TV-news montages, and animated backdrops — into such a space, inadvertently drawing attention away from the show’s emotional core: Tramarion’s death and the impact that has on everyone, not just Sabrina, but his best friend Flat Joe (Noah Abbott), the Heritage Bowl coach (Daryl C. Brown) who was with Tramarion that night, and the police officer (Dave Lester) struggling to make sense of his regrettable split-second decision.

One can sense that there’s a rigorous intellectual rationale for every choice, but many of them do not work dramatically, and pop-culture references (including a heated debate between two teens over each’s favorite superheroes) feel especially forced. It’s as if Craig-Galván has written a play to be analyzed and studied rather than performed. “Black Super Hero Magic Mama” may present itself as a dramatization of how parents cope with the senseless killing of kids like Tamir Rice or Trayvon Martin, but it more effectively serves as an academic look at narratology itself, examining how various popular formats serve or exclude the African-American experience.

She’s hardly being coy about this aspect of her agenda, opening with Sabrina reading a Harry Potter book to her son, interrupting herself to rant about how J.K. Rowling’s boy wizard belongs to a tradition of orphaned white children overcoming the loss of their parents — a device that extends to superheroes Peter Parker and Bruce Wayne. Before long, we’ll realize that Sabrina’s story is the opposite, but infinitely more realistic: As a single black mother, she will lose her only child, but instead of rendering her superhumanly powerful, the tragedy will leave her all but catatonic for nearly an hour of the play — which may be fair, but fails to engage as Sabrina sits unresponsive to her sister’s (Cynthia Kaye McWilliams) encouragement.

When the transformation does occur midway through, Craig-Galván was obviously thinking of the way “The Wizard of Oz” stunned audiences with its shift from black-and-white to color (she cites that very effect earlier in the play) and looking for some similarly impactful stylistic device. But post-intermission is almost too late to pull such a switch. By that point, the play has lost those who couldn’t handle Sabrina’s unresponsive passivity, and it’s done little to establish how the upcoming switch to flamboyant fantasy relates to tragedy at hand.

Although the show assumes fresh energy once Sabrina becomes the Maasai Angel — wearing a hand-beaded crown and intricately printed tribal tabard over shiny red spandex — it’s not at all clear why the halberd-wielding hero must fight all the actors from the first half before snapping out of her depression. (She talks about “leveling up,” which isn’t even a comic book device, but something borrowed from video games.) Can what happens in this fantasy portion turn back the clock on Tramarion’s death? Short answer: No. But even with McWilliams re-outfitted in black costume and blue wig as narrator of the second half, the rules are frustratingly ill-defined.

This latter stretch of the play seems to be all about empowerment — about recognizing and reclaiming one’s inner strength, and potentially taking all of the qualities that had made Sabrina such a good mother and deciding where to redirect them within her community. So why doesn’t it feel more poignant to witness Sabrina take charge of such a tragic situation? There’s no doubt Craig-Galván could accomplish that with a lot more revision, but as it stands, the more-conceptual-than-effective “Black Super Hero Magic Mama” seems to believe that comic books matter to the African-American community, but never communicates why that is.

Production:A Geffen Playhouse production of a play in two acts by Inda Craig-Galván.