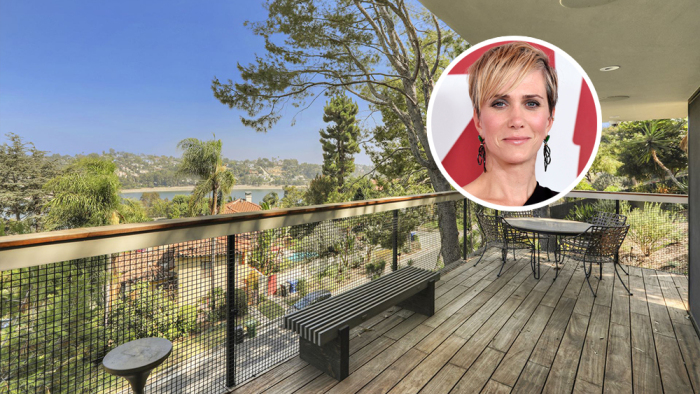 Having recently completed a carefully considered, comprehensive and no doubt exceedingly costly restoration, update and addition of a swimming pool and guesthouse, funny lady Kristen Wiig has listed an architecturally significant hillside home in the Silver Lake area of Los Angeles with a dead serious asking price of $5.125 million. The “Bridesmaids” writer and star purchased the circa 1952, Albert P. Martin-designed, tree house-like residence in May 2014 for $1.7 million and, per marketing materials, engaged the high-end services of Taalman Architecture and The Archers to work the place over into a photogenic, avocational architecture maven’s private paradise. Positioned at a thigh busting and glute firming altitude above the street and two-car garage on a forbiddingly precipitous, 17,000-square-foot up-sloped parcel that borders the legendary, John Lautner-designed Silvertop residence, the sun-filled, south-east facing residence retains its original floor plan with three bedrooms and three bathrooms in about 2,500-square-feet. A newly built poolside pavilion of about 1,000-square-feet contains another bedroom and bathroom.

A eye-catching beacon atop a zigzagging exterior staircase, a tomato red front door on the lower level opens to a slender entrance hall and adjoining office/library that features an imposing but inviting, inglenook-inspired concrete block fireplace and a sliding wall panel behind which is a newly added, state-of-the-art screening room with plush, eggplant-colored sofa. There’s also a den, a couple of guest bedrooms and an unquestionably extra-chic laundry room on the lower floor. A narrow staircase climbs up to the main living space, an open, glass-walled great room with a huge, asymmetrically composed concrete block fireplace, alluringly unusual, triangular-shaped oyster-colored cement floor tiles and a vaulted ceiling sheathed in Western Red Cedar planks. A wall of windows in the living room slides opens to a wrap-around deck with cross-reservoir view while floor-to-ceiling glass sliders in the dining area lead to a cozy dining and lounging terrace carved into the hillside behind the house. The open-concept kitchen remains true to its original footprint but is all gussied up with bright white quartz countertops, a restrained bit of stained glass and a mix of lustrous American Black Walnut and high-gloss white laminate cabinetry. Also upstairs is a cozily appointed TV-lounge and the master suite that includes a custom fitted closet and dressing gallery and a vibrantly tiled bathroom.

Set even higher on the hillside off to one side of the main house, a newly constructed and satisfyingly muscular, poured concrete pavilion with shiny, exposed metal ceiling treatment spills out through floor-to-ceiling glass sliders to a wood deck and a plunge-sized swimming pool and spa that floats in the treetops with a view over the reservoir. A decked courtyard with wet bar separates the bifurcated pavilion; On one side there’s a spacious lounge and multi-person sauna and on the other a spacious en suite bedroom that opens to a private deck.

Market watchers will note the $5.125 million asking price is not especially high compared with the neighboring Los Feliz area. However, it’s more than twice what a single-family residence has sold for in the 90039 zip code in more than three years. Plus, if the property sells for anywhere near its asking price, it will be the second highest sale in the Silver Lake area behind its internationally renowned next door neighbor, Silvertop, which was acquired amid heated competition in 2014 by Beats Electronics president Luke Wood for $8.55 million, more than a million bucks above its asking price.

As Wiig’s professional success has skyrocketed, the eight-time Emmy nominee and 2012 Oscar nominee has steadily fattened and upgraded her portfolio of private homes that stretches from coast to coast. In 2009, while a cast member on “Saturday Night Live,” she paid $1.5 million for a just shy of 1,500-square-foot loft in New York City’s Soho neighborhood; In late 2015 she shelled out almost $2.5 million for a multi-acre spread on Martha’s Vineyard; And late in 2017, after selling a hillside contemporary in L.A.’s Franklin Hills for nearly $1.8 million, she splashed out close to $3 million for a boldly updated 1940s architectural tucked up in the affluent foothills above the Rose Bowl in Pasadena.