On a dry lake in the Alvord Desert in Oregon in December 1976, Kitty O’Neil wedged herself into a three-wheeled rocket-powered vehicle called the SMI Motivator. She gave the throttle two taps to awaken the engine and then watched an assistant count down from 10 with hand signals. At zero, she pushed the throttle down.

“During a sliver of a second, the howling machine stood motionless, as if stuck in time,” Coles Phinizy wrote in Sports Illustrated. “In the next instant, it was gone, a shrinking blur lost in its own trailing noise.”

The Motivator accelerated rapidly, though silently for Ms. O’Neil; she was deaf. Her speed peaked briefly at 618 miles per hour, and with a second explosive run measured over one kilometer, she attained an average speed of 512.7 m.p.h., shattering the land-speed record for women by about 200 m.p.h.

For Ms. O’Neil, her record — which still stands — was the highlight of a career in daredevilry. She also set speed records on water skis and in boats and, working as a stuntwoman, crashed cars and survived immolation. She flipped a dune buggy as Lindsay Wagner’s stunt double on the television series “The Bionic Woman” and leapt 127 feet from a hotel balcony onto an inflated airbag as Lynda Carter’s stunt double on “Wonder Woman.”

The cause was pneumonia, said Ky Michaelson, a close friend who built rocket-powered vehicles, including some for Ms. O’Neil.

“She seemed never to have fear,” Mr. Michaelson said in a telephone interview. “I’d never say to her, ‘Kitty, are you scared?’ Not Kitty. But I’ve been in a car with her many times and she scared the heck out of me. She was a pretty reckless driver.”

In 1978, she wrecked a rocket-fueled Corvette funny car while trying to set a quarter-mile speed record on a dry lake in El Mirage, Calif., in the Mojave Desert. She had pushed the car past 350 m.p.h. when it flipped, flying 200 yards in the air and landing on its nose. She had minor shoulder injuries and told reporters later that she had tried to deploy a parachute, then thought, “Oh Christ, it’s going to crash.”

Kitty Linn O’Neil was born on March 24, 1946, in Corpus Christi, Tex. She was a few months old when a high fever caused by measles, mumps and smallpox destroyed nerves and led to her deafness. Her mother, Patsy (Compton) O’Neil, opened a school for the hearing-impaired after teaching Kitty to lip-read rather than use sign language. Her father, John, was an oil wildcatter who died when Kitty was young.

Kitty loved speed from an early age, demanding when she was 4 that her father prop her atop his lawn mower and ride it as fast as it could go.

She excelled at swimming and diving, and collected numerous medals before moving to Anaheim, Calif., to train with the noted coach Sammy Lee (who later coached Olympians like Greg Louganis) for a possible spot on the 1964 United States Olympic diving team. A broken wrist derailed her quest, and, following a bout of spinal meningitis, she discovered that she was no longer interested in the sport.

“It wasn’t scary enough for me,” she told The Chicago Tribune in 1979. She took up hang gliding, scuba diving, water skiing and sky diving. But she found her métier in faster, more dangerous pursuits astride motorcycles and at the helm of rocket-fueled cars. 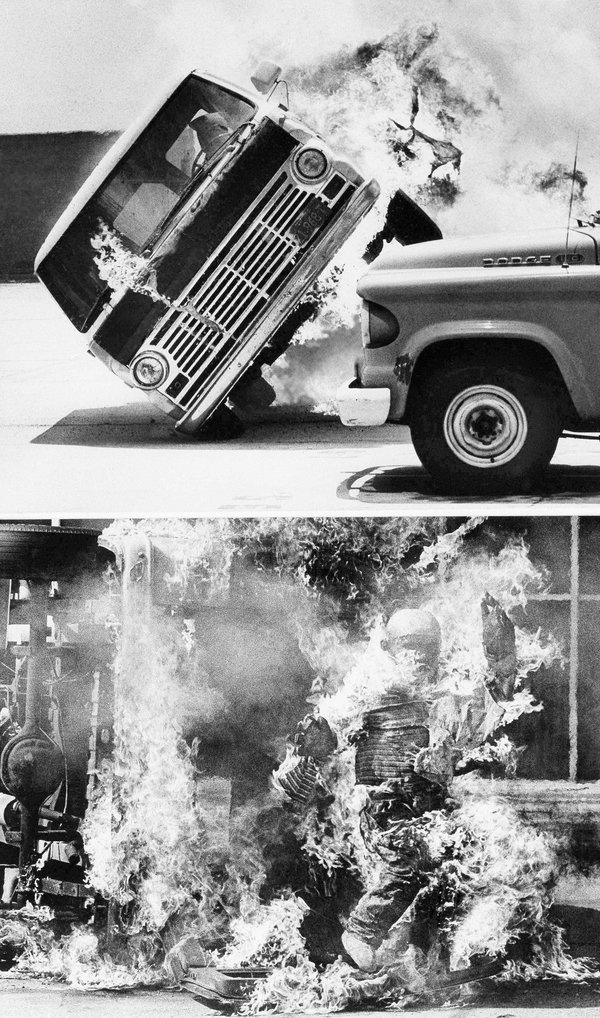 Being deaf, she often said, helped deepen her concentration whether she was racing a dragster or leaping off buildings. Those perilous worlds melded for her in the 1970s after she met the stuntman Ronald Hambleton, known as Duffy, while competing in a motorcycle race in Valencia, Calif. The two lived together, and with help from Mr. Hambleton and Hal Needham, the stuntman turned film director, Ms. O’Neil began performing stunts in movies and on television.

Her success as a stuntwoman brought her into racing at extreme speeds and to the Alvord Desert, where Bill Frederick, who built devices for stunts, had spent $500,000 to develop the Motivator.

Two days after Ms. O’Neil broke the women’s land-speed record, which had been set by Lee Breedlove in 1965, Mr. Frederick hoped that the Motivator break the land-speed record of 630.4 m.p.h., which Gary Gabelich had set in 1970 on the Bonneville Salt Flats in Utah.

“It really hurts,” she told United Press International after being told of the dispute. “I wanted to do it again. I had a good feeling.”

She was further soured by a comment attributed to a spokesman for the sponsors that it would be “unbecoming and degrading for a woman to set a land speed record.” The spokesman later denied having made the remark.

Mr. Frederick recognized that he had been caught in the middle of a gender fight.

“When they saw the female getting all the publicity, they got real uptight,” he told The Los Angeles Times soon after the dispute began.

Ms. O’Neil moved on, seeking the thrills and danger of extreme speed in other fast vehicles and the feel of the G-forces against her 98-pound body.

“It’s a beautiful feeling,” she told The Daily Press of Newport News, Va., in 1978, the year Mattel started manufacturing a Kitty O’Neil stuntwoman action figure. “I just want to go faster, maybe 740 miles per hour by the end of the year.”

In 1979 she was the subject of a made-for-television movie, “Silent Victory: The Kitty O’Neil Story,” with Stockard Channing in the title role. In his review for The Associated Press, Peter Boyer praised it for being a “strong personal drama” that did not become a “freak show with lots of wrecked cars.”

Ms. O’Neil continued to race and perform stunts for films like “Smokey and the Bandit II” and “The Blues Brothers” until her retirement in the early 1980s. Some of the artifacts from her career, like a crash helmet, are in the Eureka Pioneer Museum.

She leaves no immediate survivors.

In 1979, while on a break from working on “The Blues Brothers,” Ms. O’Neil visited the Holy Trinity School for the Deaf. She told the students there that they should not regard their deafness as an impediment to success.

“Deaf people can do anything,” she was quoted saying in The Tribune. “Never give up. When I was 18, I was told I couldn’t get a job because I was deaf. But I said someday I’m going to be famous in sports, to show them I can do anything.”