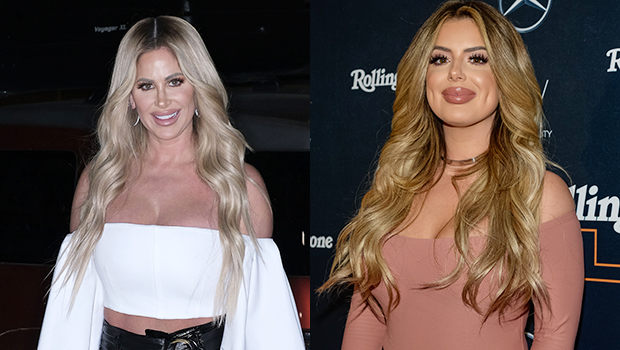 Kim Zolciak thinks Brielle Biermann should wait until having kids to even consider going under the knife, after her daughter told HollywoodLife that she will probably ‘redo’ her ‘whole body’ and face one day.

Kim Zolciak Biermann, 40, doesn’t want daughter Brielle, 22, to do more procedures beyond lip injections — for now. The Don’t Be Tardy star’s mini me had EXCLUSIVELY told HollywoodLife that she will probably “redo my whole body,” face and “everything,” although she denied actually having plastic surgery. When Kim got wind of this, she was more than a bit concerned. “Oh my God. She’s out of her mind…Brielle’s out of her mind,” Kim repeated in an EXCLUSIVE chat with HollywoodLife. Although Brielle predicted she’d go under the knife in the future, not now, Kim has already had heart-to-hearts with her eldest daughter about cosmetic procedures.

“I always told Brielle, ‘I had six kids,’” Kim explained, as she shares Kroy, 7, Kash, 6, and twins Kaia and Kane, 5, with husband Kroy Biermann (he also adopted Kim’s daughters Brielle and Ariana, 17). However, the founder of KAB Cosmetics and Kashmere Kollections did admit to getting a “boob job” before all of her brood had arrived, as she received breast implants in 2015 before her breast reduction procedure in 2018. “But I didn’t do anything else to my body until after I had [my kids] when I had a breast lift after I breastfed all six kids,” Kim continued, adding, “And I had to fix a hernia, so I said you might as well just try to make everything perfect.” It’s actually common for patients to combine a hernia reparation with a tummy tuck, which is exactly what Kim did in 2014 — which just goes to show that she doesn’t hit up her surgeon at random. Given her new entrepreneurial ventures, Kim is more focused on skincare than procedures, as she treats herself to facials “every couple of months,” like the IPL facial laser.

“So I tell my kids after you have kids and all that stuff, you deserve that, and you do that for yourself if that’s what makes you happy,” Kim told us. “But I feel like both my girls are very confident in their skin at this time. So whatever makes Brielle happy.” Even if that means it doesn’t make Kim necessarily happy! “At the end of the day, like with her lips, I wasn’t happy about it, but when she turned 18, I had no control over it, so I had two options. Either I tell her to go figure it out on her own, or I take her to the best place, and that’s what I did.”

Even though Brielle has repeatedly shot down plastic surgery rumors, she still takes heat from haters accusing her of cosmetically enhancing her boobs and butt. But Kim knows her daughter is stronger than the trolls. “Well, I think Brielle’s a very strong person, and I don’t think she’s really affected by the comments. She’s very confident in herself,” Kim told HollywoodLife. And that’s exactly why Brielle challenges the nasty Instagram comments! “It’s all day every day and it gets annoying. Everybody has an opinion, good or bad, and it just gets annoying all of the time,” Brielle had told us before. “And you have to be like, ‘Listen, you don’t know what’s going on.’”