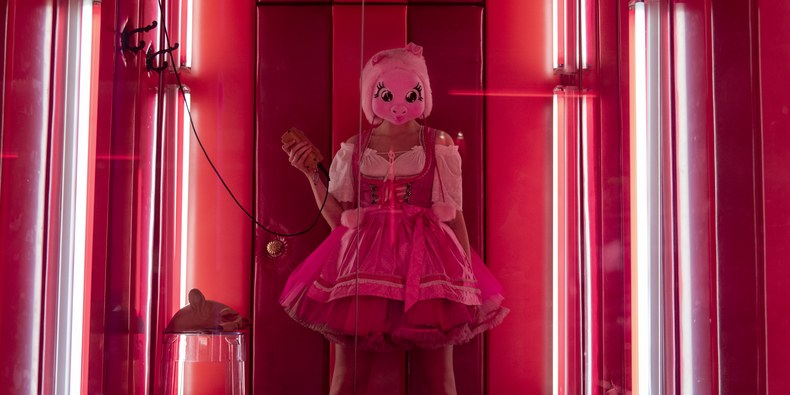 If there's anything Killing Eve has taught us about Villanelle, it's that she sure looks good in pink. Episode 4 of season 2 is proof of that—even if none of her looks are nearly as high-fashion as the pink tulle Molly Goddard confection that earned her the reputation of TV's chicest assassin in season 1.

While it's the least notable of her ensembles this episode, the first look is perhaps the most telling. As evidenced by the picturesque canal where they meet—ostensibly to take in the view, though of course really to talk about the next unfortunate human she's going to kill in cold blood—Villanelle and Konstantin are in Amsterdam, where the former appears to have purchased a drape-y magenta jacket, a pair of floral pants, and a quite uncharacteristic white t-shirt, emblazoned with a cartoonishly sumptuous pair of lips.

Maybe Konstantin has a point; with Eve on her mind, Villanelle does seem to be going a bit soft, even as she teases him about his own recent purchases: a black short-sleeved vest and a graphic button-up, whose shirttails billow in the wind for the length of the scene.

Konstantin Vasiliev as Kim Bodnia and Jodie Comer as Villanelle in season 2, episode 4 of Killing Eve.

Villanelle is sharp as ever, though, when she next appears, perhaps having dressed for the occasion of writing a postcard to Eve. Even a street-style minded tourist, who's toting a camera and a Celine bag, can't help but notice her sleek pink monochrome, complete with a fuchsia floor-length skirt and enormous gold earrings. She compliments her and asks to take a photo of her for her Instagram—and Villanelle responds with a look of pure scorn and some advice to match: "Get a real life!"

But her dark mood lifts almost instantly, the moment she resumes writing the message she's about to send off to London: "Darling Eve, I hope you haven't forgotten about me!!," scrawled on the back of a card featuring two men being hung upside down with their guts spilling out onto the ground beneath them. Cute!

Jodie Comer as the street-style averse Villanelle in season 2, episode 4 of Killing Eve.

The adorable postcard that Villanelle sends to Eve in season 2, episode 4 of Killing Eve.

The image is clearly still on Villanelle's mind later that night, which she spends thinking about Eve in between recreating the postcard's carnage. As for how her victim also ended up hanging by his ankles, well, he clearly also thought Villanelle looked good in pink; he followed her down a street in the city's Red Light District, which she was roaming in a flouncy pink tulle dress, topped off with an apron and a furry pink pom-pom hat. Oh, and a mask completely obscuring her face behind that of a pig with eyelashes. There's no shortage of pink tulle, but it's definitely no Molly Goddard.

Jodie Comer as Villanelle as a murderous pig in season 2, episode 4 of Killing Eve.

By the next day, Villanelle has moved to the opposite end of the color wheel. After slipping into a silky green robe, Villanelle returns to the scene of the crime and perches at a street-facing window in hopes to catch a glimpse of Eve. But at this point, it's not only Konstantin who's caught on to their flirtations; Carolyn both confiscates the postcard and sends Jess, Eve's pregnant coworker, to Amsterdam in her stead.

To cope with the disappointment, Villanelle acts like she's actually in Amsterdam: She buys drugs and heads to a nightclub, where, funnily enough, her silky robe fits in just as well as it did at the brothel. Villanelle herself, however, does not; by the time morning rolls around, she's covered in vomit—and, shockingly, tears.

Jodie Comer as Villanelle at the club in season 2, episode 4 of Killing Eve.