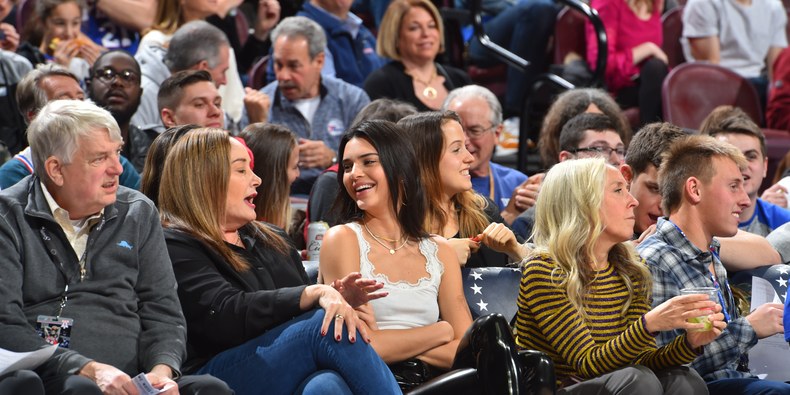 Though they haven't officially defined their relationship, Kendall Jenner and Ben Simmons have taken an important step for any couple: a family outing. At Friday's Philadelphia 76ers versus Washington Wizards game, Jenner sat court side next to Simmons' mother, Julie.

According to E! News, "Both women looked casual and trendy while sitting courtside in Philadelphia. Kendall wore a white tank top and shiny leather pants while Julie donned a black jacket, jeans and floral boots."

From photos, it looks like they got along pretty well, and the positive energy must have been in the air because the 76ers, Simmons' team, won the game.

According to E!, the not-exactly-a-relationship between the reality star and pro athlete started as a summer fling, but didn't get serious, exactly, for cuffing season. Instead, Jenner and Simmons are more like close friends who see each other and hook up when they can, but have mutually decided that work comes first, so there are no hard feelings when they have to travel. Per their sources, "Kendall and Ben have been making more of an effort in their relationship recently, and have been seeing each other regularly for the last month now. They both are very busy with their careers, but have always been in touch…Kendall really likes Ben and he has been keeping her attention. They try not to put stress or pressure on the relationship, but Kendall isn't actively seeing anyone else right now…They hang out and really like each other but they aren't going to label it or take it a step further because their careers come first…They talk all the time and will continue to see each other when they can."

Of all the Kardashian-Jenners, Kendall keeps her romantic life the most private, but she did acknowledge her court side emotions with a couple cheeky tweets earlier this week, basically confirming the rumor that she's less a fan and more of a cheerleader:

Related: Kendall Jenner Jokes About Being the Only One in Her Family Without Children