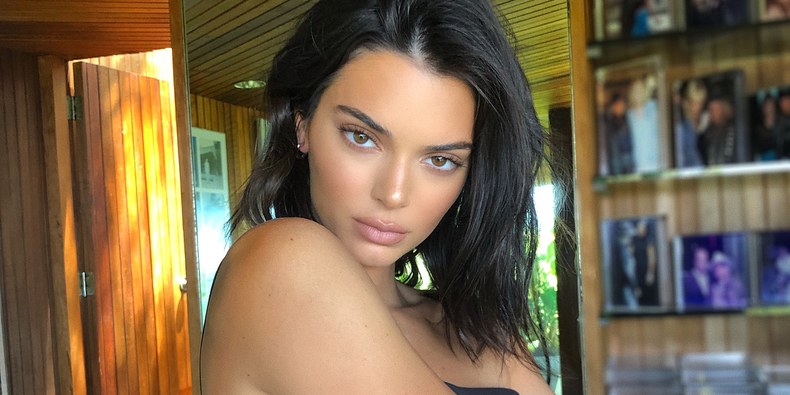 Keeping Up with the next generation of Kardashians is even harder than the original. Everyone, aside from Kendall Jenner, is now a parent to a total of eight Kardashian-Jenners who will be growing up in their parents' spotlight. While the model is waiting to start her own family, she's busy on aunt duty in the meantime. As for which of her nieces and nephews Jenner enjoys spending time with the most — a question that shouldn't really ever be asked — the 23-year-old has an answer.

When put on the spot, by her parent network E!, Jenner revealed that out of all of the kids she's an aunt to, it's her younger sister's daughter who she feels closest to. “I find a very special connection with Stormi [Webster]," she said of Kylie Jenner and Travis Scott's daughter. "I don’t know if it’s because she’s my little sister’s baby, but I don’t know. We have a nice bond. I can feel it.” (She pretty much confirmed that back in March when she wrote of Stormi on her Instagram Stories, "My niece is so damn cute."

Jenner opened up about her other nieces and nephews, giving them love as well, saying, “I just try and hang around, be cool. I love connecting with them. Mason loves video games and I love videos games, so he and I just sit around and bond over video games and rap music and all the things he loves. It’s nice when they get a bit older and you can have full conversations with them.”

As for her relationship with Stormi's mom, Jenner has said that the birth of her favorite niece brought her and Kyle closer together. "It’s obviously a bit weird that your little sister is having a baby before you," she recently said, adding that Kylie's pregnancy "took her a minute to process." "I didn’t expect it to happen like this. But it’s beautiful… It’s brought us closer together. We’ve always been very close, but we would butt heads all the time." When you niece is this cute, it makes all that head-butting fade away in the rearview mirror.