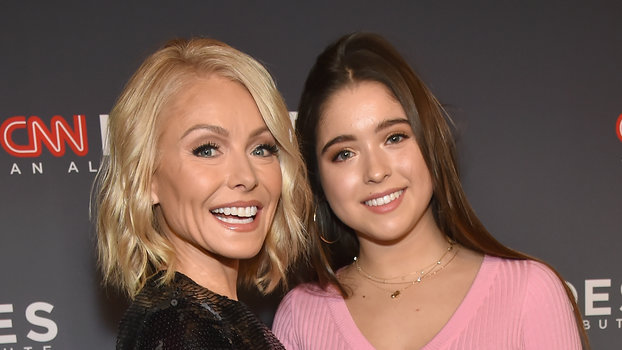 Kelly Ripa was in for a surprise when it came to getting her and Mark Consuelos's daughter ready for prom.

Ripa recently sat down with Jerry O'Connell on the premiere episode of the Jerry O Show and revealed that Lola, 18, had made some changes to her dress without telling either of her parents.

“That’s prom,” Ripa said as a photo of herself and Lola came up on a screen. "That’s the prom dress that we had made and she had altered behind our back.”

For her senior prom, Lola had worn an emerald green gown with a v-neck and high slit, custom designed by NYC-based tailor Raza Wijdan and styled by her mother’s stylist, Audrey Slater. However, the teen made some secret last minute alterations.

“So that’s why the girls are fully on display,” Ripa joked. “Everybody came down the stairs together. And I just mean Lola.”

Ripa also told O'Connell that Lola, as any teen daughter would, only let her mother post "approved" photos from prom, which was a process in and of itself.

Thankfully, this won't be her only chance to participate in prom festivities — Ripa and Consuelos have another 16-year-old at home (son Joaquin), so it won't be long before we get a few more carefully vetted photos from his big night.

Paris Might Be the Best City for Italian Food (Outside Italy)

Chessington World of Adventures: Get two FREE tickets worth over £100 with Sun Superdays
Lifestyle News

Jason Biggs new Fox sitcom ‘Outmatched’ is lousy, but these other shows aren’t

Lizzo goes near nude in stunning Rolling Stone cover surrounded by shirtless men
We and our partners use cookies on this site to improve our service, perform analytics, personalize advertising, measure advertising performance, and remember website preferences.Ok