Growing up as a kid during the ’90s, one of my favorite weekend pastimes was spending the mornings eating Frosted Flakes while watching cartoons. It’s hard to believe, but seven generations of cereal lovers have now taken part in this tradition and grown up eating Kellogg’s sugar-coated corn flakes, which have been around since 1952. If you’re a sucker for nostalgia, you’ll want to check out Kellogg’s retro Tony the Tiger t-shirt collection, which is a grrreat way to pay tribute to all those memories. Featuring different versions of the orange-striped mascot from every era, these nostalgia-inducing threads are pretty much guaranteed to bring back those Saturday morning memories.

It’s no secret that adulting is hard, and I’m so here for Kellogg’s throwing it back to a simpler time by launching a new capsule t-shirt collection. Starting on Thursday, March 7, which happens to be National Cereal Day, the brand is offering t-shirts featuring seven different Tony designs to show how the tiger has changed over the years. From the 1950s to the present day, each white top features a red Kellogg’s NYC logo and that decade’s iteration of Tony the Tiger. Considering that Kellogg’s has been around for 113 years now, the cereal company definitely knows how to do nostalgic merchandise justice. The beloved cat has been around since the very beginning of Frosted Flakes, but he’s had quite a few makeovers since then.

I think most people are probably familiar with the 2019 Tony design, which shows the animated icon crossing his arms with his trademark red bandana. On the other hand, I’d never seen the 1950s and 1960s designs — which both depict Tony with his tongue sticking out —before, and it’s interesting seeing how the illustrating style has changed over the years. 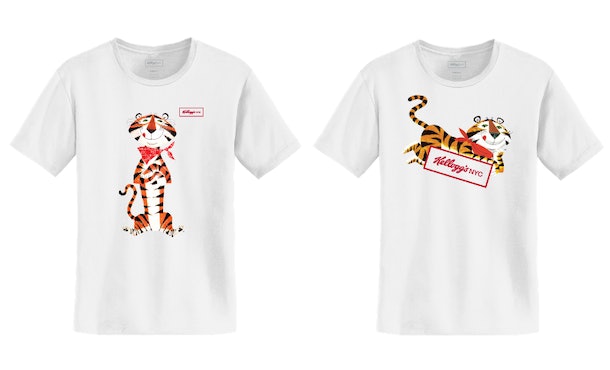 Also, who knew that the tiger’s nose only took on a blue hue one decade after first appearing as the cereal’s official mascot?

While I was surprised to see that Tony’s statement red bandana has been with him from the very beginning, it’s kind of cool that it originally started out as a patterned accessory in the 1950s before the cat decided to take a more subtle approach.

If you’re looking to get your hands on one of these t-shirts, Frosted Flakes stans can purchase one of the seven designs at www.KelloggsNYC.com for $28 starting on March 7 while supplies last. A Kellogg’s rep also confirmed that the Kellogg’s NYC Cafe located in Union Square will also have a small selection, if you’d rather go and see the options for yourself.

If you’re in the market for some nostalgic merch, I’d recommend choosing the Tony the Tiger design that you remember growing up with, but you can obviously pick any of the options that appeal to you. Personally, I’m gravitating towards the 1950s design as a fun and retro take on the brand’s OG spokesperson. 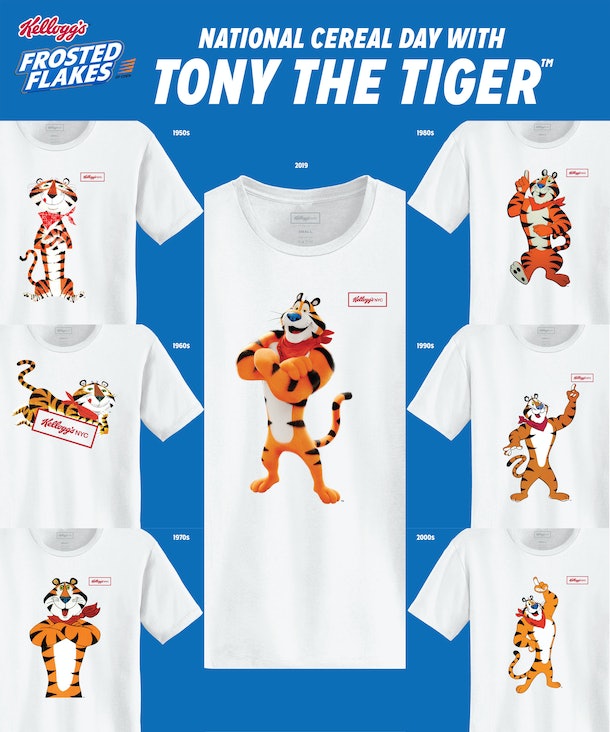 The days of having little to no responsibility might be over, but with National Cereal Day falling on Thursday, there’s no better time to relive the Saturday mornings of your childhood by enjoying a bowl of Frosted Flakes and some cartoons while wearing one of these limited edition t-shirts.