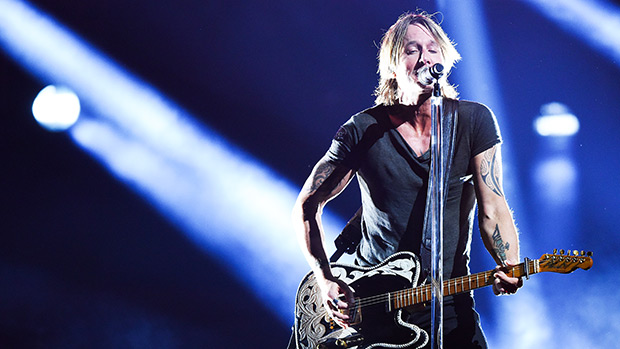 There’s a reason Keith Urban’s a household name in the country music community. His performance at the 2018 CMA Awards even had his wife Nicole Kidman on her feet, just as his song’s name promised!

Give Keith Urban, 51, a guitar, and he’ll wow an arena — that’s exactly what he did at 2018 Country Music Association Awards on Nov. 14! Keith showed us an even more energetic side to his stage persona as he got up on an elevated platform and rocked out to his new hit, “Never Comin Down.” The mesmerized faces at the Bridgestone Arena in Nashville, Tenn. barely surprised us! This is Keith we’re talking about, who’s nominated for not one, but three awards tonight: Entertainer of the Year, Album of the Year and Male Vocalist of the Year. Those are some hefty titles. We just hope Keith has enough shelf space to add another trophy to his collection, if he does win any of the honors. The hit maker already has 10 Country Music Association awards, in addition to four Grammys! Watch him prove he’s worthy of all those honors below.

Keith is especially pumped about his Entertainer of the Year nomination. As you’ve witnessed on tonight’s award show, he’s a live performer at heart! “Entertainer is obviously an incredible category and playing live, I’ve been doing that more than anything in my life,” he told ET ahead of the show. “I mean, I was playing live before I wrote songs. I wasn’t making records [yet], that was all ahead of me. So playing live is the foundation of so much who I am and what I do. [I’ve been] trying to put on better and better tours and concerts every year, [so to] end up with the Entertainer nod is incredible.” And it’s well deserved, Keith!

Keith hoped tonight’s performance would be a surprise, which he also told the outlet! His wish was granted, as we were thrilled to see him perform new material from his 2018 album, Graffiti U. Keith set the bar high for our expectations after last year’s CMAs performance. Amid the #MeToo and #TimesUp movements, Keith sang “Female,” his song about female empowerment and the injustices women face. This is why Keith’s our favorite.

After watching Keith’s musical chops above, check out HollywoodLife’s gallery of celebrity arrivals at the CMAs. You need to see all the glitzy gowns and dashing suits at this year’s award show!