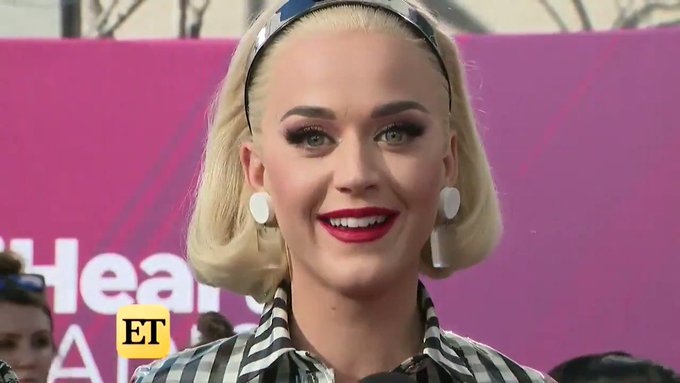 This use may include analytics, personalization, and ads.

We’ve got the A.I. version of Katy Perry on the #iHeartAwards2019 red carpet and she’s “open” to making new music… with Taylor Swift!

Still no bad blood! Katy Perry confirmed she would be down to collaborate with Taylor Swift while she attended the iHeartRadio Music Awards in Los Angeles on Thursday, March 14.

Zedd, 29, continued the robot pretense. ”I programmed her to make music with anybody,” he quipped. “It’s great.”

Thursday’s award show marked one of the first times Perry and Swift were in the same room since their “Bad Blood” first made headlines. The two pop stars — both of whom once dated John Mayer — didn’t interact during the show, but Swift, 29, seemed to be in an easygoing mood, an onlooker tells Us Weekly. (She also won Tour of the Year and Best Music Video at the event.)

“Towards the beginning of the show, a seat filler was in Taylor Swift’s seat and when she went to go sit down, the seat filler got up and asked her to take a selfie with him and she jokingly said back, ‘I’ll take a picture with you if you let me have my seat back!’” the onlooker says, adding that Swift posed for three selfies with the fan. “Taylor was extremely chill.”

Perry’s years-long feud with Swift started when she allegedly poached several of Swift’s backup dancers, as Swift told Rolling Stone in 2014. After the 10-time Grammy winner alluded to the drama in her hit “Bad Blood,” Perry opened up about the feud in a May 2017 installment of Carpool Karaoke.

“There’s a situation,” she told host James Corden. “Honestly, it’s really like she started it, and it’s time for her to finish it. I tried to talk to her about it and she wouldn’t speak to me. I do the right thing any time that it feels like a fumble. It was a full shutdown and then she writes a song about me, and I’m like, ‘OK, cool, cool, cool. That’s how you want to deal with it?’”

The two recording artists seemed to bury the hatchet a year later when Perry sent Swift a literal olive branch and a handwritten note. “So I just got to my dressing room and found this actual olive branch. This means so much to me,” Swift said in her Instagram Stories at the time as she showed off the goodwill gesture. In her caption, she wrote, “Thank you Katy