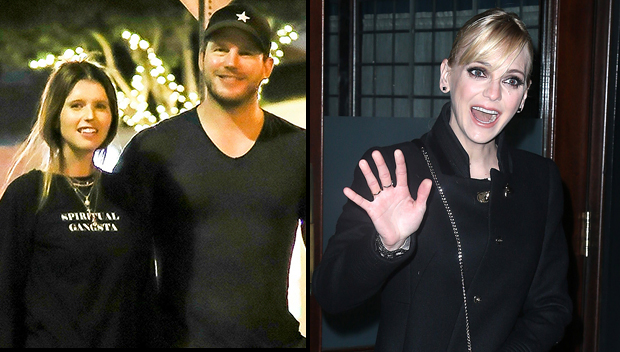 Hanging out with your BF’s ex-wife and child has to be nerve-racking, but Chris Pratt made sure GF Katherine Schwarzenegger got a sweet pep talk before spending Halloween with Anna Faris.

It was one big happy modern family for exes Chris Pratt, 39, and Anna Faris, 41, as they brought their significant others along to trick or treat with six-year-old son Jack on Halloween. It was the first time that Chris’ girlfriend Katherine Schwarzenegger, 29 got to spend quality time with  his wife of nearly a decade. Anna brought along her boyfriend of nearly a year Michael Barrett and the group was all smiles. While Katherine was anxious about being around Anna, Chris calmed her nerves, and the Mom actress couldn’t have been sweeter to her ex’s new love.

“Anna has always been so welcoming to Katherine but this (Halloween) was the first time they actually spent a good amount of time together. Katherine was a little nervous because she’s always been a fan of Anna’s so it was like this double whammy of hanging with your boyfriend’s ex-wife and hanging out with one of your favorite actresses. But Anna made it easy, she was so warm and just as sweet and funny as you would expect, Katherine had nothing but great things to say, she really clicked with Anna,”  a friend of Katherine’s tells HollywoodLife.com EXCLUSIVELY.

“And Chris did the sweetest thing beforehand to help calm Katherine’s nerves, he gave her an actual pep talk like he was the coach. He reminded her how great she is and he told her all the nice things Anna has said about her since they started dating. Of course Chris being Chris he got very goofy and had her laughing uncontrollably too, which always helps,” our insider adds.

Pics shows the group was all smiles and having a great time taking Jack trick or treating through a LA neighborhood. Katherine and Chris are so into each other they did a couple’s costume where both went as vikings. Anna went as Snow White but with a schoolgirl twist and her boyfriend Michael made a half-hearted attempt to dress as Games of Thrones‘ Khaleesi. Jack was the cutest of them all, dressed like a ninja in black and red with just his eyes poking out from his costume. Divorce is always hard for kids, but having his parents still friendly and in happy relationships of their own has to be so healthy for the little guy.