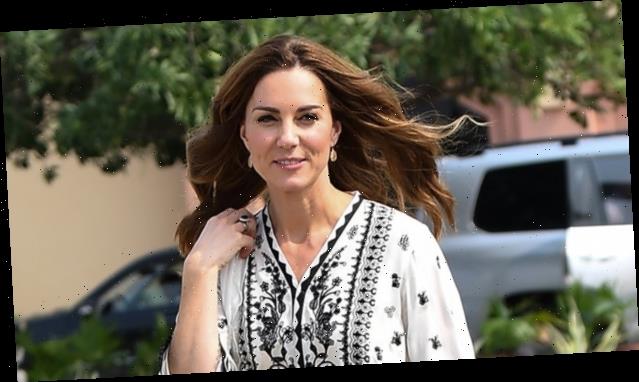 Kate Middleton and Prince William's royal tour of Pakistan may be drawing to a close, but that doesn't mean there wasn't time for Kate to debut two more outfits.

The Duke and Duchess touched down in Islamabad after a terrifying storm forced the royals' plane to turn back from Lahore during a violent lightning storm.

After finally making it to Islamabad, Kate was spotted wearing another traditional outfit in the form of a black and white kurta by Pakistani designer Élan. Paired with matching white slacks and a nude J. Crew heels, Kate finished off her look with a sleek black tote bag.

Kate has been wearing a wide variety of outfits inspired by Pakistani culture, from several colorful shalwar kameez, a Chitrali hat given to her upon arriving in the area, and even jewelry designed by Pakistani label Zeen. She's also made it a point of wearing green in honor of the country several times throughout the tour.

But Kate's final tour day style didn't end with the kurta. She and Prince William also made it a point to visit the UK Defence Animal Training Centre for some time well-spent with dogs and their handlers. While there, the couple learned how pups are trained to recognize and sniff out any types of potentially dangerous materials.

The Duchess was clad in nearly the same ensemble she began the day in, with a color swap: she wore another black and white outfit, this time paired with a lengthy black coat, cream pants, and black heels. Don't forget a smile, as Kate and William had the chance to get up close and personal with some of the military puppies in training.

The royals' tour has been filled with exciting moments, such as the pair making some time to visit the National Cricket Academy for a few games with a charitable organization. Kate even went barefoot and donned a headscarf while visiting a Pakistani mosque. But while Kate and Prince William spent time all throughout the country, they made it a point to never stop showing their respect for the culture as well as Princess Diana, mimicking several stops she had originally made years prior.

Their trip had been called the "most complex royal tour ever," according to Kensington Palace, "given the logistical and security considerations."

It will certainly be bittersweet to see the Duke and Duchess of Cambridge leaving Pakistan since we've seen so many exciting excursions and outfit changes. But even though they'll be returning to their normal royal lives soon, we'll be keeping an eye out for Kate's next exciting few looks.