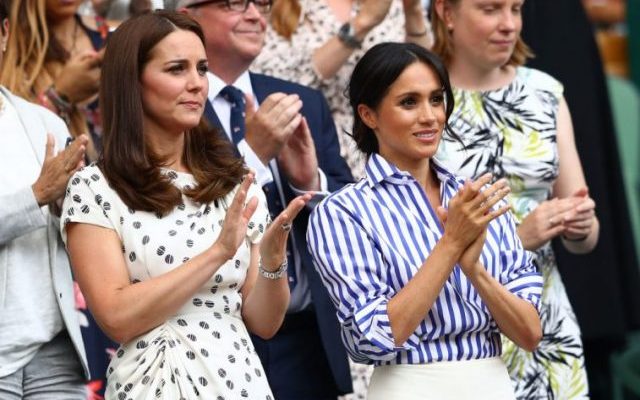 Kate Middleton and Meghan Markle are constantly setting new fashion trends, and they spare no expense to do so. The women pay for all of their own clothes, too, which makes those pricey outfits a bit sweeter. But who wears more expensive clothing? We looked at a few big events to find out who steps out in the higher-costing outfit.

There have been several numbers thrown out in regards to how expensive each bride’s wedding dress was, but experts suggest Kate’s ran somewhere around $434,000. The hand-sewn lace gown was extremely tedious to make. It was a Victorian-inspired gown designed by Sarah Burton for Alexander McQueen. Roses, daffodils, and shamrocks were some of the designs reportedly sewn into the lace. Meghan’s dress, on the other hand, was still incredibly expensive, but a bit subtler than Kate’s. It was a custom Givenchy that hugged Meghan, but wasn’t quite as form fitting around the waist as Kate’s.

Kate and Meghan each had to make their first royal appearance. Kate’s occurred when she met the Obamas after returning from her honeymoon in 2011. She chose a Reiss dress, which is a very popular brand in the United Kingdom and nothing too fancy. It was form fitting but elegant and only cost the equivalent of $227. Meghan went for something a bit more expensive. Prince Charles’ 70th birthday celebration was Meghan’s first formal royal outing, and she wore a dress by Goat, which retailed for the equivalent of $768. All things considered, that isn’t too expensive.

First solo outing with the queen

Kate has always been a fan of affordable fashion (depending on what you consider affordable). In her first solo outing with the queen in 2012, she opted to wear a matching two-piece outfit in teal by L.K. Bennett, which was only $677. The queen complemented Kate’s choice with a bright pink outfit. Meghan’s first solo outing, which took place in 2018, saw her in a custom Givenchy dress that reportedly cost $18,000. Meghan spent more by a landslide on this one. But perhaps Meghan’s more reserved wedding dress cost makes up for it.

When Kate and William got married, people instantly saw Kate as a spokesperson for modest fashion, or “high-street” fashion. She often wore outfits that retailed for less than $1,000. And she has also been known to repeat outfits. She recently stepped out to a formal event in an outfit that she had worn back in 2012. While some found it disappointing, others were happy to see someone so regal repeating outfits. It humanizes her a bit. But despite occasionally repeating outfits, Kate still spends a small fortune on her clothing. Experts suggest her 2017 wardrobe cost somewhere around $160,000.

Meghan, on the other hand, hasn’t been as financially reserved since joining the royal family. She has frequently stepped out in very high-fashion outfits that easily cost several thousand dollars. Experts put her past year’s wardrobe somewhere around $1,000,000. However, there have been mixed thoughts about how much Meghan’s wedding dress cost; the estimate for her million-dollar wardrobe put her dress at $440,000, so it’s possible the actual cost was less.