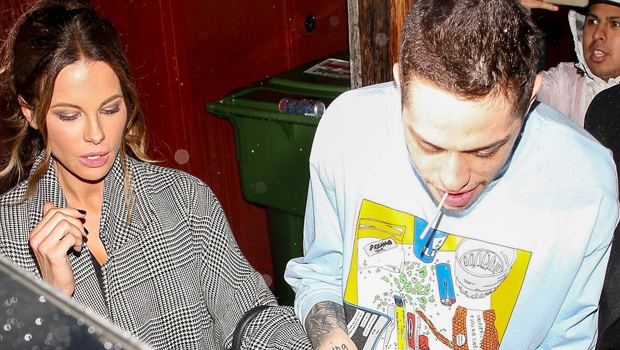 Kate Beckinsale and Pete Davidson are enjoying seeing each other – they held hands all night at an ‘SNL’ after party, and HollywoodLife EXCLUSIVELY learned they plan to attend a Rangers game tonight!

Looks like The Aviator actress Kate Beckinsale, 45, and Saturday Night Live star Pete Davidson, 25, are already enjoying back-to-back date nights! The two were spotted holding hands at an SNL after party on March 2, and Kate and Pete also plan to go and see the New York Rangers play a hockey game tonight at Madison Square Garden in New York City! HollywoodLife EXCLUSIVELY found out that Kate and Pete plan to attend the game and sit in the VIP section together. What a romantic date night!

The comedian, who is 25-year-old Ariana Grande’s ex-fiancé, walked quickly with Kate while holding her hand after his Saturday television show. Kate’s hair was down and curled, while Pete wore a vibrantly-colored puffer jacket. An eyewitness who saw them said that they saw the couple arriving at Dos Caminos, a Mexican restaurant, in a black Cadillac Escalade at 1:30 a.m. after SNL.

“They held hands the entire time and seemed really happy,” the eyewitness said. “Fans were screaming and excited to see them and they seemed un-phased and wanting to get inside right away.” These two have shown they have no problem engaging in some PDA, even when attending a work function! Kate and Pete held hands after his comedy show on Feb. 1, too!

“Kate has an extremely flirty and fun personality and Pete isn’t looking for anything serious right now as he’s really busy focusing on himself,” another source told HollywoodLife EXCLUSIVELY. “They ran into each other at Globes parties [in January] and started talking more so they have stayed in touch more, but this isn’t anything serious right now — It’s just fun and flirty for both of them.”

Even if Kate and Pete are only seeing each other casually, two dates in a row definitely means they enjoy hanging out with one another and they don’t care who knows it! It’s clear Kate is comfortable joining Pete when they’re surrounded by his coworkers or the general public at a huge game night – maybe fans in the crowd will see them on the jumbotron! We’re looking forward to seeing what’s next for these two, even if they decide to keep it casual for the foreseeable future. It’s obvious that they at least like one another, so we fully support this budding relationship!