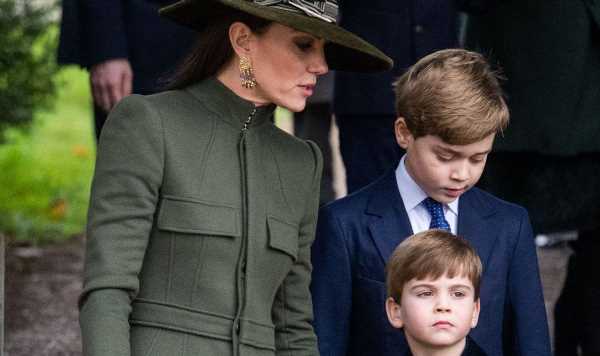 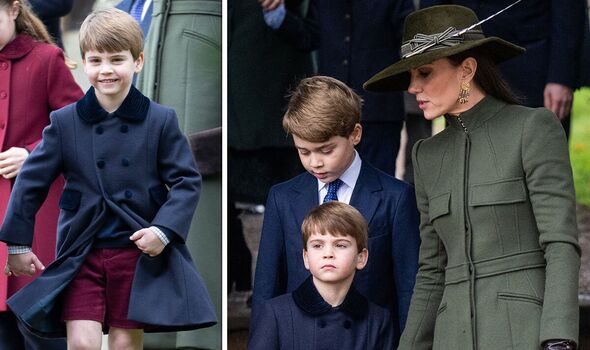 Body language expert Judi James analysed the Royal Family outing on Christmas Day when the Prince and Princess of Wales attended Christmas service at Sandringham with their children Prince George, Princess Charlotte and Prince Louis. Judi commented that the royals have “extra pressure” with their children in public “when it comes to avoiding escalations into tantrums and tears”.

The body language expert opined that William seemed to be “quietly in charge” of Prince George and Charlotte, “although thanks to the way both he and Kate have eased them into royal life, they now seem to need little more than the odd touch on the back to create any form of loving reassurance in public”.

Judi claimed that “there was a telling moment” when William shook hands with the clergyman outside the church and then “motioned with one hand to introduce his children to him”.

“That would once have meant some bending or stooping and some small nudges forward from William, but now it looks as though George and Charlotte are fully confident about the skills of the royal greeting rituals,” Judi said.

George could even be seen flexing one hand behind his back “to ready it and relax it before he stepped forward”.

“There is another change in the parenting dynamics, too,” Judi claimed, as when the family arrived at the church, “William leant towards George and held his arm out as though preparing to guide his oldest son, but George was already busy doing that identical ritual to his younger brother”.

Similarly, Princess Charlotte looked very friendly and communicative, and she was so well behaved, as always.

The young royal showed at the Jubilee celebrations earlier this year that she is “confident enough to give her older brother nudges on protocol”.

The expert said that “there is now a combination of ‘parenting’ roles going on between parents and siblings that is helping create a well-honed team”.

Princess Kate was again “clearly still in charge” of her youngest son, Prince Louis, but she also “seemed to have lots of loving back-up from three other alert family members”.

The role-modelling from George and Charlotte also means Louis can make his own decisions in public, Judi explained.

He called for the Paddington card to be shown to a little girl in the crowd, for example, he “dashed off to catch up with Charlotte, and even pulled his mother along when he seemed to think she was falling behind”.

Unlike his siblings George and Charlotte, Louis “has never seemed to be over-awed by royal outings or made shy by public attention,” the expert commented.

Judi explained: “It always seemed to be the underlying shyness that made the older siblings more reserved in public, but for Louis, there seems to be less of a filter when it comes to acting like a happy, playful and spontaneous four-year-old.

“He looks less keen to stay close to his parents when there are other friends around. He walked off ahead to get next to Camilla after the church service, grinning up at her as though expecting her full attention, and he is open about sharing his feelings via his body language, unlike George and Charlotte who are now old enough to understand the need for masking and etiquette.”

Kate was the parent-in-charge of Louis this Christmas at Sandringham and her body language suggested she was combining “some proactive behaviour with a desire to see her son feeling as free to enjoy himself as possible on this exciting day”.

The Princess’ grip on Louis’s hand looked firm enough to allow her to keep him close, although he arrived with enough scope to walk behind his family and enjoy the excitement of the crowds, Judi explained.

The clasp “provided the link that allowed Kate to do her own meet-and-greet without constantly keeping an eye on her small son”. She seemed aware of his natural parameters, which are “now made bigger thanks to the fact he has two siblings and two parents that he can run between”.

The body language expert also commented that Zara and Mike Tindall seemed the most relaxed members of the Royal Family.

They seemed to be “the perfect role models at Christmas for allowing their children to enjoy the outing without too much pressure to act formally, arriving at the church happily laughing and joking with their small daughter skipping and swinging between their hands,” she opined.