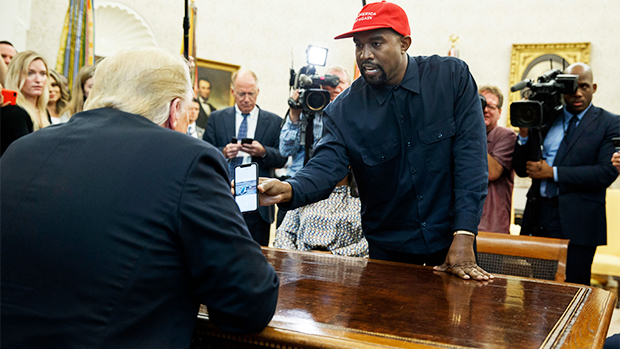 Kanye West thinks he’s been played by Donald Trump and Candace Owens, and that realization was really ‘unsettling,’ we’ve learned exclusively. Here’s why he’s decided to split from the MAGA scene.

He’s vehemently supported Donald Trump and proudly worn a MAGA hat for weeks, but Kanye West has had a change of heart. The rapper recently went on another of his famous Twitter rants to declare his break in ideology from the president, and to allege that he’s being “used to spread messages I don’t believe in.” A source close to the rapper told HollywoodLife EXCLUSIVELY how Kanye came to that realization. “The violence of the past week,” the shooting at the Pittsburgh synagogue, the 12 pipe bombs sent to prominent democrats, “was really jarring for Kanye,” the source said. “It got Kanye thinking, and the conclusions he came to were really unsettling and disturbing to him.”

You see, Kanye was enamored with Trump and the brand he represented. His support was “big picture,” as the source said. “Kanye loved that Trump’s anti-establishment and that he isn’t your run-of-the mill politician. Trump has no filter and thinks outside the box. Because Trump was a reality TV star, Kanye saw him as kind of a ‘pop culture’ president. The whole thing really appealed to Kanye’s creative sensibilities.”

Kanye realized, though, that that’s not enough to make a good leader. “Kanye’s realized there’s a very high price to pay for the rhetoric that’s being spoken by the president he was endorsing, and it’s dawned on him that he can’t just pick and choose parts of Trump’s agenda that he likes; it’s all or nothing.” And it’s not just Trump that Kanye’s frustrated with. As he explained in his tweet thread, he’s done with Candace Owens, the conservative commentator responsible for “Blexit,” her campaign to encourage black people to break away from the democrats.

“Kanye’s not happy that he’s being used as the poster child for Candace’s campaign without his consent. He’s totally not down with that and he feels exploited. The whole situation has left a really bad taste in his mouth,” the source said. HollywoodLife reached out to Kanye’s rep for comment on this story but did not immediately hear back.