Her latest album “Star-Crossed” is apparently ineligible within the category.

Kacey Musgraves broke her silence on the Recording Academy’s apparent decision to exclude her album “Star-Crossed” from competing in the country category at the Grammys.

On Wednesday October 13, the “Justified” singer tweeted, “You can take the girl out of the country (genre) but you can’t take the country out of the girl,” along with a photo of Musgraves wearing a pink cowboy hat as a child.

Her alleged exclusion from the category came to light after a letter the president of her label, Cindy Mabe of Universal Music Group Nashville, wrote to the Recoding Academy protesting their decision hit the press.

In the letter — which you can read in full at Variety — Mabe said she hoped Recording Academy CEO Harvey Mason Jr. would “fully understand the importance of Kacey Musgraves to country music, and why this decision is so much more than an entry point for an awards show.”

She also pointed out that diversifying the country music genre and representing female voices were crucial with “women making up only 10 percent of all country airplay.” The UMG Nashville president also brought up Morgan Wallen and the controversy surrounding his racist outburst earlier this year.

“This year alone country music has been mired in the controversy surrounding one of the format’s biggest artists, Morgan Wallen, who used a racial slur and grew fans and audience from it,” she continued. “THIS IS NOT ALL THAT WE ARE. Under the surface are the artists that change it all and they are led by the example of Kacey Musgraves.” 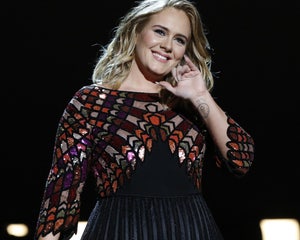 Mabe also suggested the decision was made by competitors who thought the 33-year-old singer would be a frontrunner within the category.

“The idea that a handful of people including competitors, who would benefit from Kacey not being in the country category, are deciding what is country only exacerbates the problem,” Mabe wrote. “The system is broken and sadly not just for Kacey Musgraves but for our entire genre because of how these decisions are made for music’s biggest stage.”

“I haven’t slept all weekend because I’m really sad for our format. I’m sad for fans of our music and the ramifications of how we’ll continue to define success in country music. This short-sided, biased decision will send ripples throughout our format to continue to insure that the message is sent that country music can only be for the limited few that enjoy the same perspective,” Mabe added.

Although the rest of her album will be nominated within the pop category, Musgraves’ song “Camera Roll” will still be eligible within the country music genre. So far, the Recording Academy has not commented on the matter.