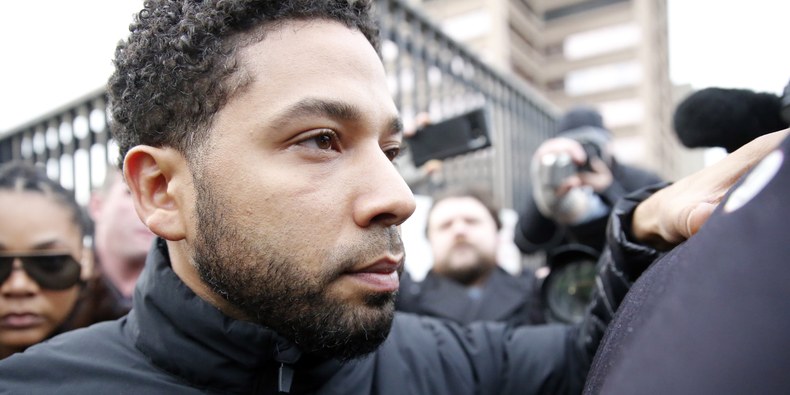 Just more than two weeks after his initial arrest, Empire actor Jussie Smollett has been indicted on 16 counts of disorderly conduct, according to the New York Times.

The grand jury was convened a week after Smollett’s arrest for a single felony charge related to allegations that he had staged an alleged homophobic hate crime in January; it returned the indictments on Thursday. Among them were additional charges that Smollett had “falsely reported batteries, aggravated batteries, and hate crimes,” per the Times. Chicago ABC affiliate ABC7 reports that the grand jury returned the indictments as two separate sets of charges—the first, related to Smollett’s initial police report, and the second, related to his follow-up interview with the police.

“Jussie adamantly maintains his innocence even if law enforcement has robbed him of that presumption,” said Smollett’s lawyer, Mark Geragos, in a statement upon receiving the indictments. Geragos went on to describe the 16 indictments as “prosecutorial overkill,” “redundant and vindictive,” and “desperate.” Cook County has yet to release a public statement about the indictment.

The Times has a helpful timeline laying the whole thing out, beginning with the alleged attack on Jan. 29. Smollett alleges that he was walking in Chicago late at night when he was accosted by two men who poured bleach on him, shouted racist and homophobic epithets (and, apparently, “This is MAGA country,” referring to Donald Trump’s campaign slogan), and secured a rope around his neck. After his attackers retreated, Smollett made his way to Northwestern Memorial Hospital and was swiftly discharged. At the time, the Chicago Police Department said it was “treating [the incident] as a possible hate crime”; there was a swift, vehement outpouring of celebrity support for Smollett, who made a planned concert appearance less than a week later.

But by the middle of February, the CPD had begun to investigate the incident as a hoax; the alleged attackers, apparently, had appeared as extras on Empire and the police said Smollett paid them $3,500 to stage the attack. By some accounts, Smollett was upset with his salary or the prospect of being written out of Empire, impelling him to allegedly stage the crime; the team behind the show denied that Smollett was ever going to be written out. But, as the police department indicated in a statement to Vulture, the investigation has been plagued by leaks to the media, resulting in an often fuzzy portrait of a tangled, ugly situation. Smollett, however, is "fiercely" maintaining his innocence.