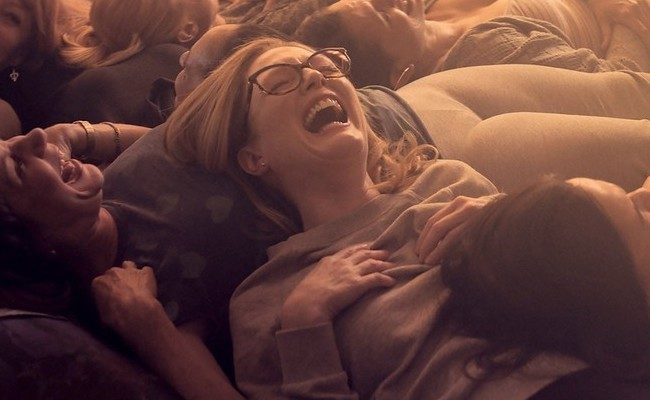 “When the world blows up, I hope I go down dancing.” Gloria Bell acts and often sounds like she’s in a wistful musical or a formulaic rom-com, but that’s part of her charm. Some people really are that endearing and full of hope and Julianne Moore makes you believe it. She plays Gloria in Gloria Bell with a reckless enthusiasm that’s hard not to admire. Some actresses can do anything and Moore is one. She’d be worth the price of admission at a car show.

Chilean writer/director Sebastián Lelio already made a movie called Gloria in 2013. Gloria Bell is very similar, but not a remake. Lelio has described it as a cover song. Both films are about women living single and falling in love while going to night clubs. They are much different at the same time. Gloria Bell simply feels more American. Whatever Lelio has accomplished with his two films, he has assuredly captured the spirit of place in each. While Gloria is bound by the politics of living under a dictator in Chile, Gloria Bell remains light and untouched by its American setting. It’s more of a good time. Female freedom and independence is something Lelio is certainly interested in. His 2017 film, A Fantastic Woman, follows a trans character on her own after her boyfriend’s death. And Lelio’s last film, Disobedience, watches Rachel McAdams struggle with her Orthodox Jewish life after the woman she once loved moves back into town.

Gloria Bell is similar as a character study, but it’s more of a celebration of female independence than an examination. Lelio wanted his movie to be like jazz, constantly dynamic, and it does feel that way. The untraditional narrative is more episodic than anything else, jumping from life event to life event and wasting little time on the mundane.

Divorced and searching for herself, Gloria hopes her son (Michael Cera) will answer the phone. Her daughter (Caren Pistorius) is in love with a surfer. She’s not a big part of their lives anymore. She goes to yoga and finds hobbies, but she wants happiness. She loves dancing and singing and all that stuff you see in Disney movies. So Gloria goes to the club at night, and it’s there she finds Arnold (John Turturro) staring at her from across the floor. Divorced and recovering from a serious surgery, Arnold is starting a new life also and he and Gloria begin a passionate affair. It’s within the beats of life Lelio’s camera comes alive. He ponders the act of love making, offering us brief glimpses of passion, of desire. He finds emotion everywhere, elevating garden-variety moments into something memorable. Of course, it’s Moore who does the heavy lifting.

A natural, Moore always seems to find the humanity in every character she plays. She doesn’t have to work hard to find it in Gloria, who’s bursting with life. This allows the 58-year-old actress to improvise, to move freely. Acting is an art of strategy and compromise, but Gloria Bell isn’t a typical movie. It doesn’t restrict Moore. It tells a story usually centered around someone younger, or male. But Julianne Moore isn’t a typical actress. Lelio allows her to exist within the frame, and she does, in marvelous fashion.