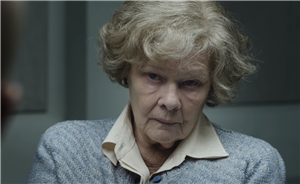 It’s the year 2000. Quiet retiree Joan Stanley (Judi Dench) is suddenly arrested in her quiet English town.. The charges? High treason. They claim she handed British secrets on atomic weaponry over to the Soviet Union in her youth, and in the new film Red Joan, out April 19, we see her full story unfold. Red Joan is based on a true story, but with the typical creative liberties movies so often take with real life.

The film is based on the 2014 novel Red Joan, by author Jennie Rooney, which itself is a fictionalized account of Melita Norwood, a young woman whose work for the KGB wasn’t discovered until decades later. While the book and film’s main change is the woman’s name, there’s also a heightened romance that the real Norwood, married until her husband’s death according to The Guardian, would likely have found laughable as the reason for her daring work.

Norwood herself read a statement in her charming English garden explaining her actions to gathered press, as reported in a 1999 New York Times article following her shocking arrest at age 87. "I did what I did not to make money but to help prevent the defeat of a new system which had, at great cost, given ordinary people food and fares which they could afford, a good education and a health service," she said, per the paper. The system she was referring to was Communism. Norwood had joined the Communist Party in 1936, just a year before she took her dull-sounding, but classified and cutting-edge job at the British Non-Ferrous Metals Research Association in London, according to her obituary in The Guardian.

A major difference between Norwood and her film counterpart is exactly that belief in the political power of Communism. While the real Melita Norwood was also staunchly anti-nuclear — the same Times article notes anti-war and nuclear disarmament stickers in her windows — for the onscreen version, Joan, it’s the main reason she participates in spying, to balance the odds in the Russian-American arms race. Whereas in reality, The Telegraph notes that she told reporters Soviet Communism was "a good experiment, and I agreed with it…I would do it again," if given the chance to spy for the cause.

The movie explores Joan’s younger years, where she quickly rose to full agent for the proto-KGB and was given the code name "Hola." In the early years of World War II the British began a secret atomic research project in tandem with the Americans, called Tube Alloy. As secretary at the company storing the top-secret information on metals like uranium, the real Norwood was in the unique position to pass on information that, according to The Telegraph, helped the Russians develop their own atomic bomb two years ahead of schedule. She would remove Tube Alloy files from her boss’ safe, photograph them, and pass along the data to the KGB.

Norwood managed to escape discovery several times, including following a round-up of fellow spies at Woolrich Arsenal in 1937, according to The Telegraph, where the ringleader mentioned her codename several times in his notebooks. Though the British government knew of an agent "Hola" passing nuclear secrets on to the Russians, they didn’t have her real identity…until 1992, when M15 found out her real name by researching the archives of defected KGB spy Vasili Mitrokhin, according to The Independent.

Yet even Norwood didn’t realize she’d been discovered until reporters came knocking at her door seven years later; it seems prosecuting spies is harder than it looks, and the British government decided it would "not be in the public interest" to prosecute her, also per The Independent. The real Melita Norwood died in 2005.